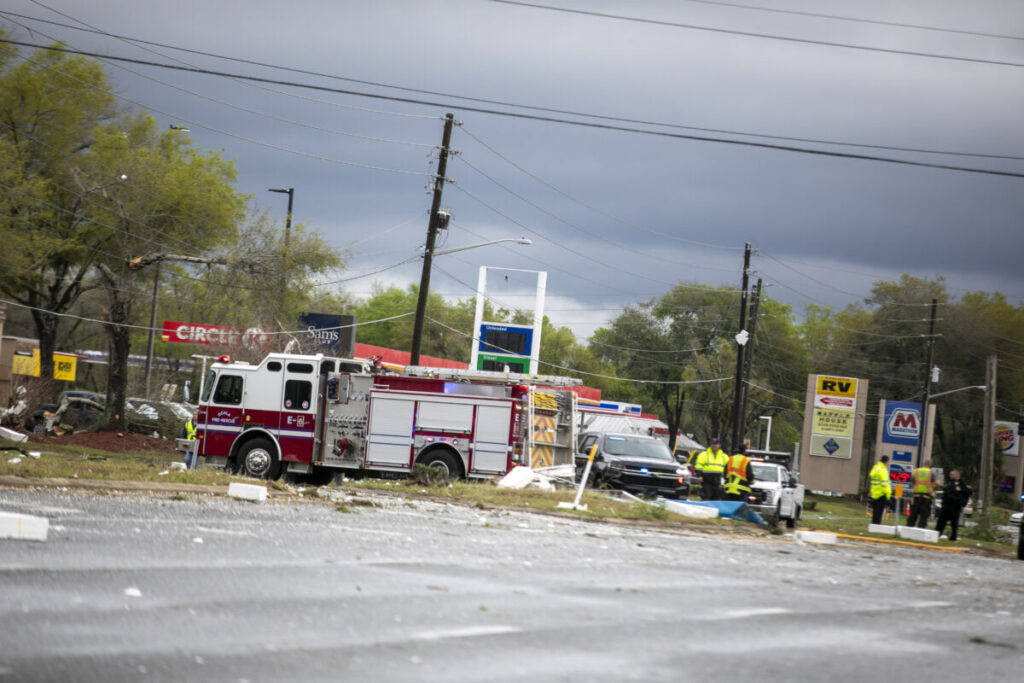 Traffic was shut down on SR 200 after tornado devastated homes, businesses and apartment buildings on Saturday March 12, 2022 in Ocala, Florida. Many structures were damaged but there were no injuries reported. [Alan Youngblood/Special to the Ocala Gazette]

Will National Weather Service (NWS) radars detect tornados and alert us in advance?

Maybe, but not always.

It’s more likely you will receive a tornado warning as a result of a person who has reported one than a radar system picking up one near your home and alerting you.

What we learned during the March 12 tornado was that tornadoes categorized as “small” do not show up on radar.

In the case of the March 12 tornado, it was categorized as a “small” EF1, traveling 26.67 miles from downtown Dunnellon to Ocala for 25 minutes, at an estimated 110 mph and got up to 65 yards wide.

In that case, the National Weather Service was only able to alert that there were “atmospheric conditions very favorable for north central Florida and I-75 corridor.”

As Hurricane Ian approaches, we are again likely to get warnings that we are entering very favorable conditions for tornados.

“Here in Florida, we generally do not get the big tornadoes seen elsewhere (Great Plains, Midwest, Gulf Coast). Most of our tornadoes are small and fairly short-lived, which is challenging for radar detection, even fairly close to the radar site,” Pete Wolf, Science & Operations Officer for the Jacksonville NWS office wrote in an email to the Gazette following the March 12 tornado.

“Official NWS tornado warning verification stats point to the fact that 1/3 of all tornadoes are not detected, and these are generally the small EF0 or EF1 tornadoes. To counter this, the NWS depends on storm spotters to report these small occurrences to support warnings. Radar only tells us what’s happening thousands of feet above the ground, whereas spotters can tell us what’s actually occurring at the surface,” Wolf wrote.

In the case of the March 12 tornado, Wolf remarked, “Unfortunately, no reports were received to know a small tornado was ongoing.”

He pointed to the Skywarn network the NWS has formed to have more active storm spotters. According to Skywarn’s website, the NWS trains this nationwide network of volunteers to report significant weather events and they are always looking for more people to volunteer. Classes are in person and virtual. Those interested in volunteering can visit https://www.weather.gov/jax/skywarn_schedule

Radars in Jacksonville, Tampa Bay, Melbourne and Valdosta can give coverage to Marion County.

According to Scott C. Cordero, the chief meteorologist with the National Weather Service in Jacksonville, surrounding radars have an elevation of about 8 to 9.5 kilofeet above the ground over Marion County. 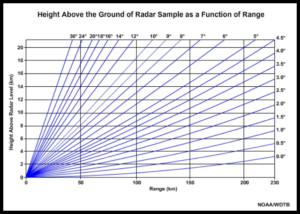 “Note that the height of each beam path increases as the beam travels farther away from the radar. This is because of the curvature of the earth,” says Scott C. Cordero, chief meteorologist with the NWS [Supplied from the NWS]

The Jacksonville station’s Doppler radar was installed in the mid-90’s and undergoes maintenance updates about once a decade. The maintenance it underwent in March supports “the radar’s operation during periods of commercial power outages, specifically when hazardous weather is present,” said Cordero.

An update to the radar’s generator was “the fifth major project of the NEXRAD Service Life Extension Program, a series of upgrades and replacements that will keep our nation’s radars viable into the 2030’s. NOAA National Weather Service, the United States Air Force, and the Federal Aviation Administration are investing $150 million in the seven-year program. The first project was the installation of the new signal processor and the second project was the transmitter refurbishment. The two remaining projects are the refurbishment of the pedestal and equipment shelters. The Service Life Extension Program for all radars will complete in 2023,” Cordero told the Gazette in March.

Local Emergency Management officials are encouraging all Marion County citizens to sign up for the emergency notification system, Alert Marion.  Citizens can sign up for text message alerts, emails, and phone calls for severe weather at www.alertmarion.com.

The notification systems of the NWS and AlertMarion are only as reliable as the data they receive.  If you want to help, sign up as a Skywarn volunteer. If you believe there is a tornado in your area, call 911.

In the coming days, citizens can call the Marion County Citizens Information Hotline at 352-369-7500, go to www.marionso.com or visit the Marion County Sheriff’s Office Facebook page for updates on Hurricane Ian.