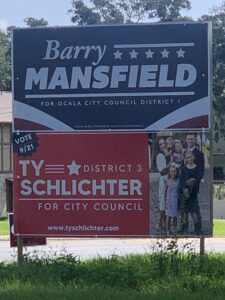 Among the candidates, Barry Mansfield, Ty Schlichter and Greg Steen, seek three of the seats. All make their livelihoods from the construction industry.

Two of these candidates, Mansfield and Schlichter, share campaign signposts and are featured on mailers together.

Is it in the best interest of our city to have 3/5 of the council come from the construction industry?

We don’t think so.

One or two representatives from any one industry could add to the board, but enough of them to carry a majority of the vote on any given issue doesn’t seem wise and we would argue against having any industry disproportionately represented on the council.

The council should be made up of members from a cross-section of society, with diverse backgrounds, experience and expertise. How else can Ocala residents expect to get a considerate, thoughtful consensus?

Adding to the possibilities for abuse is the sheer number of decisions the council must consider related to growth and development.

Fla. Stat. §112.313(6) warns against a government employee or government official using their official position or any property or resource which may be within his or her trust, or perform his or her official duties, to secure a special privilege, benefit, or exemption for himself, herself, or others.”

However, there are some loopholes the statutes don’t cover and the public and even your local newspaper would have a hard time finding ways to keep them accountable.

We don’t mean to imply we have independent knowledge that would lead us to suggest that any of the three candidates related to the construction industry would act improperly.

But, there is no way to know if a private developer gives a company tied to a council member special consideration when it comes to bidding for work.

Although a candidate would likely make an oath to the contrary, the developer offering the consideration has made no such oath.

Limiting the number of opportunities for real or perceived cronyism would help the city council maintain its integrity and trusting ties with the community.

Of course,  there is always the real possibility for abuse with a politician from any industry.

The days of passing bulky manila envelopes filled with cash to politicians are largely over. That kind of money is too risky. Why take the chance when it’s easily hidden through a seemingly legitimate “upturn” in business?

It’s why people often ponder the motives behind a presidential candidate who will spend $1 billion to win a seat that pays $400,000 per year. While that may be too simplistic a take, there are ways to work the system if you’re so inclined. And it’s not exclusive to such a lofty office as president.

The cynic will say of politicians, “They’re all crooked.” Others will say, “That’s just the way it’s done.”

But wise people look for ways to mitigate potential conflict. In this case,  city voters can limit exposure by voting for a balanced council on Sept. 21.