To the accolades of its key supporters, HOME’s newest home is open for business 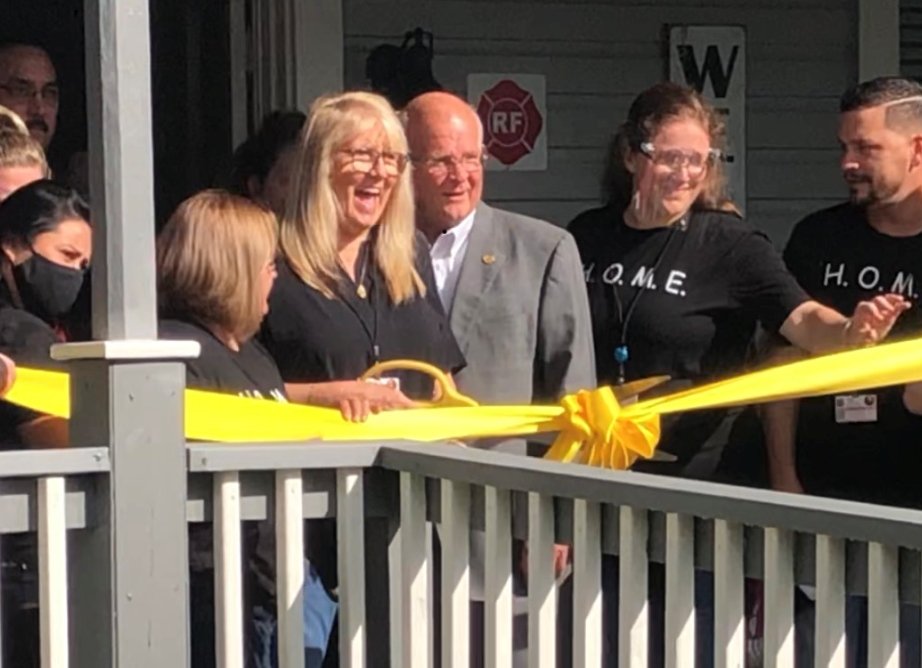 Diane Schofield, founder and CEO of Hands of Mercy Everywhere, prepares to cut the ribbon on Grace House, the organization’s newest group home for young girls, as state Sen. Dennis Baxley and HOME staff look on.

Diane Schofield, founder and CEO of Hands of Mercy Everywhere, prepares to cut the ribbon on Grace House, the organization’s newest group home for young girls, as state Sen. Dennis Baxley and HOME staff look on.

With a quick snip of an oversized pair of scissors, Diane Schofield opened a new chapter in her efforts to help troubled girls.

“We thank you all for coming. We thank God so much for this house to bring us all the blessings of the official grand opening of the Grace House,” said Schofield as she severed the bright yellow ribbon draped across the front porch. About 75 people attended the open-house ceremony, which also occurred on Schofield’s 66th birthday.

Schofield shared briefly for guests during the hourlong event how the evolution of HOME led to Grace House. She recalled that when she started HOME 17 years ago, she applied for a $190,000 grant for the project. She said a supporter who reviewed the document gave it back and advised, “Dream bigger.”

Since then, 1,040 young women have passed through her program, which now features four homes to help girls in foster care. Besides Grace House, they include Faith and Hope Houses in Belleview, which serve girls between 12 and 17, and Promise House in Ocala, a transitional home for women 18 to 21.

Seventy percent of Schofield’s clients are pregnant or mothers already. And many have been sexually or physically abused, involved in sex or human trafficking, in trouble with authorities, or, as Grace House will focus on, suffer from emotional or psychological problems.

Several of Schofield’s supporters spoke on Friday. Among them was state Sen. Dennis Baxley, R-Lady Lake, who praised Schofield for her persistence and for implementing the ideal community-based care model that the state Department of Children and Families seeks to provide.

“This is how it should be done,” he said.

State Rep. Stan McClain, R-Ocala, said he appreciated Schofield’s “no nonsense” approach to making the girls abide by rules, and the “great work” she was doing to help them.

Ocala Mayor Kent Guinn said he was adopted and recalled how his birth mother, a teenager at the time, brought him to Florida.

Sheriff Billy Woods told Schofield, “There is no greater reward that you can be given than to change the life of another human being.”

One Grace House, set up to serve six girls, is full, HOME will have 30 total clients.