Three teams remain, but not for long 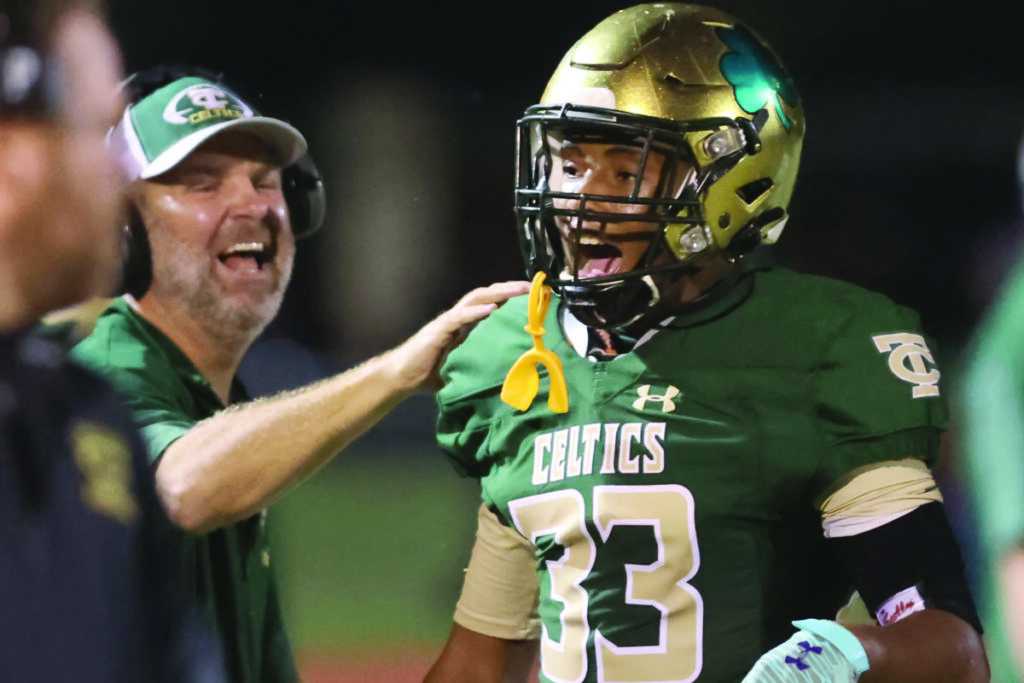 Trinity Catholic’s Zayshawn Webb (33) celebrates with coaches as he leaves the field after stopping John Carroll on fourth down during a playoff football game at Trinity Catholic High School in Ocala, Fla. on Friday, Nov. 27, 2020. Trinity Catholic won the game. [Bruce Ackerman/Ocala Gazette] 2020. 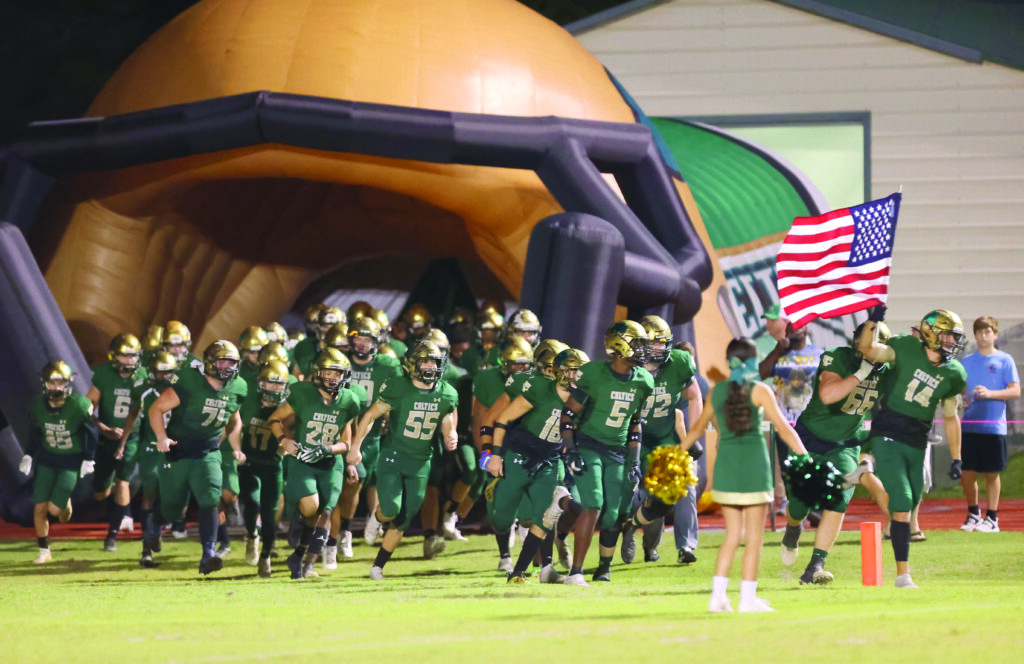 Having a reason to practice football during Thanksgiving break is a blessing for high school football programs. It means one thing: You’re still alive.

In Marion County, three of the county’s football programs remained standing beyond the Thanksgiving holiday and heading into the first week of December.

After keeping John Carroll Catholic off the scoreboard (Fort Pierce) on Nov. 27 at Dunlap Track and Field in Ocala, the Trinity Catholic Celtics improved to 7-3 on the season with a 48-0 victory.

Meanwhile, the Vanguard Knights were taking care of business at Booster Stadium. The Clay Blue Devils (Green Cove Springs) were widely expected to pose the greatest threat to the Knights, but Vanguard had other plans as the Knights thumped the Blue Devils 38-7.

The Dunnellon Tigers were slated to battle Menendez (St. Augustine), but found themselves staying home instead after Menendez forfeited the contest.

“We made the difficult decision to forfeit our semi-final game due to health-related pandemic issues,” Menendez assistant coach Allen De Vos announced via Twitter on Nov. 26.

Here’s how the games unfolded, and what’s up next: 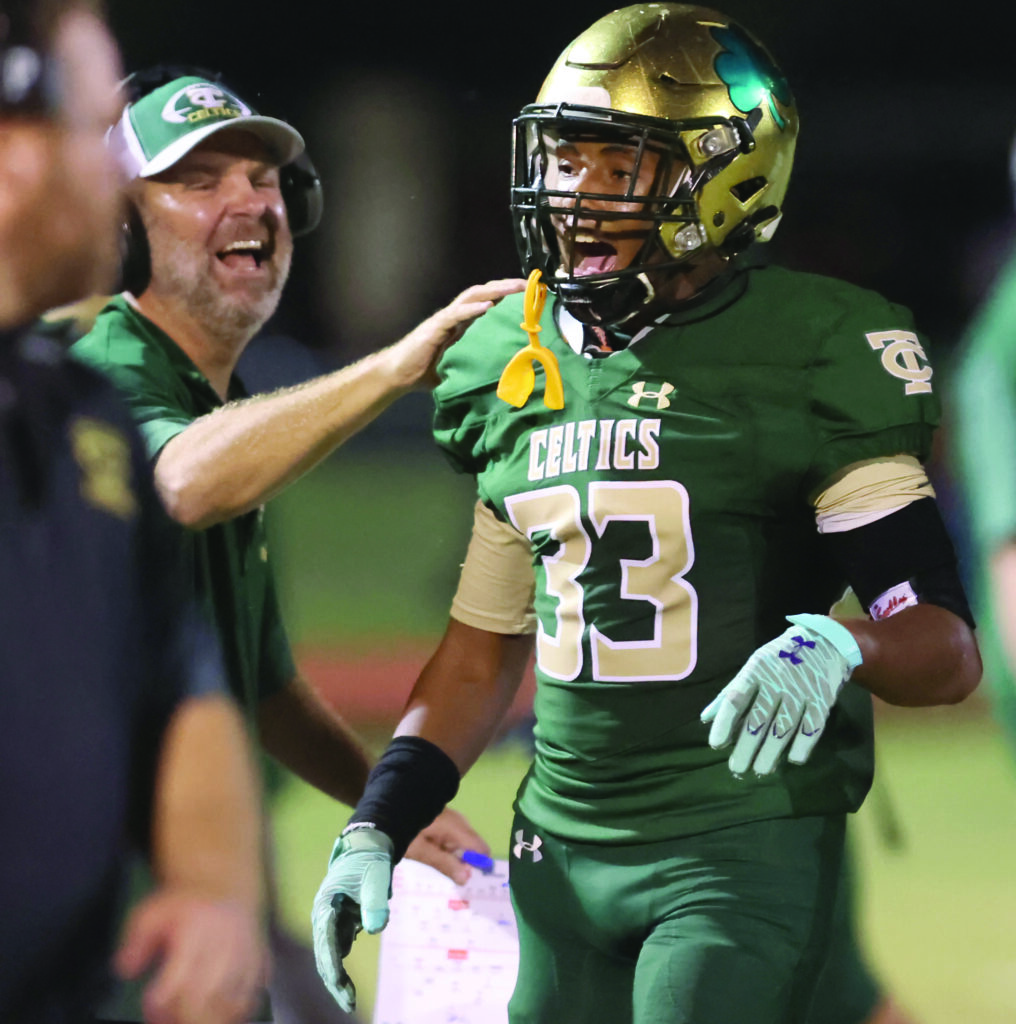 Trinity Catholic’s Zayshawn Webb (33) celebrates with coaches as he leaves the field after stopping John Carroll on fourth down during a playoff football game at Trinity Catholic High School in Ocala, Fla. on Friday, Nov. 27, 2020. Trinity Catholic won the game. [Bruce Ackerman/Ocala Gazette] 2020.

T.J. Snowden, Trinity Catholic’s senior playmaker, set the tone quickly Nov. 27 with a 45-yard receiving touchdown that helped the Celtics strike the scoreboard first. Little did either team know, Snowden’s opening score would ignite a firestorm of scoring from the Celtics.

Looking to answer the Trinity Catholic score, senior quarterback Jay Allen and the John Carroll offense would find nothing but bad luck as Allen tossed an interception to Trinity Catholic senior defensive back Jamarian Samuel. Samuel, who doubles as a running back for the Celtics, would use his agility and find the end zone for a 9-yard pick-six to extend the Celtics’ lead.

Anytime the Celtics were on offense, the ball seemed to gravitate towards Snowden, who had no trouble finding the end zone.

By the time both teams were heading to the locker room for halftime, Snowden had extended his touchdown total to three (45-yard receiving TD, 11-yard rushing TD, 58-yard rushing TD) on the evening and had the Celtics ahead of the Rams 35-0.

Following intermission, Snowden showed no signs of fatigue as he ripped off a 97-yard touchdown run to put Trinity Catholic ahead 42-0.

A running clock stopped some of the bleeding for the Rams, but the Celtics put one more score on the board behind a 5-yard run from relief quarterback Chris Allen to cap off Trinity Catholic’s 48-point effort.

Meanwhile, Trinity Catholic’s stout defense kept the shutout intact as junior linebacker Marquis Jones tallied five total tackles against the Rams, four of which happened behind the line of scrimmage.

With the victory, the Celtics’ post season run will continue Dec. 4 as they host Jacksonville’s Trinity Christian Academy (10-1) at Dunlap Track and Field for a 7 p.m. start. 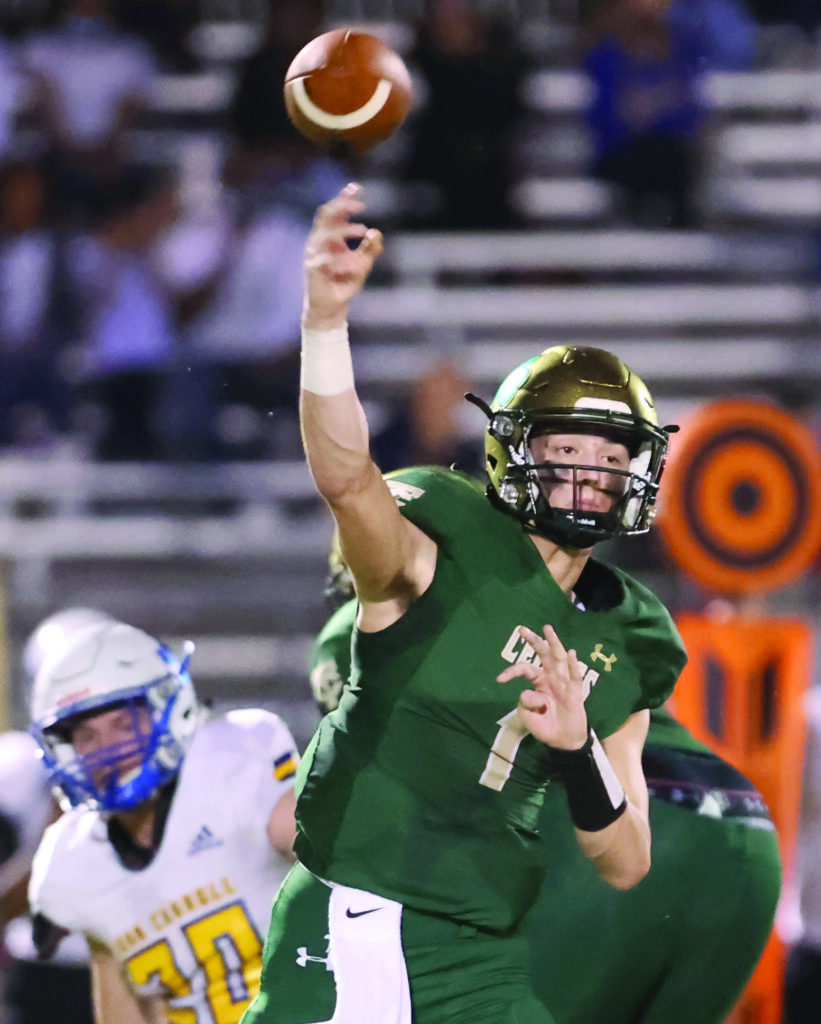 Vanguard senior Trevonte Rucker has hauled in 24 scholarship offers to play football at the next level. Sixteen of those offers come from teams within the Power 5, with seven coming from SEC programs.

And after Rucker’s dominating performance on Nov. 27, it’s no wonder so many teams are chasing the Ocala-native for his talents. En route to the Knights’ thumping of the Blue Devils, Rucker had his hand in three of Vanguard’s touchdowns. Impressively, he accomplished the feat in three different ways.

To get the senior athlete’s night underway, Rucker connected with fellow senior Tevin Williams and tossed a 15-yard touchdown pass on the Knights’ opening drive. While the Blue Devils were able to answer right back with a score of their own, an attempt to shock the Knights with an onside kick failed, and put Vanguard in great field position.

With the help of a 30-yard rush from junior Tyrell Randall, the Knights were able to cap off their short drive with seven points after senior quarterback A.J. Law rainbowed a 30-yard pass to the corner of the end zone, where Rucker came down with the scoring grab.

Rucker would add one more score on the night, this one coming in a 15-yard rushing touchdown in the third quarter. Randall and Dewhitt Betterson Jr. also found the end zone grass with a 23-yard rush and a 4-yard rush, respectively.

On the other side of the football, the Knights’ defense did exactly what was expected of them: Senior Sergio Gunsby (interception), junior Emile Sancho (two interceptions), and freshmen Fred Gaskin (interception) and Tay’Juan Leslie-Farmer (fumble recovery) all contributed takeaways in Friday’s win.

The Knights now look forward to a rematch with cross-county rival Dunnellon. The last time the two teams met, the Tigers narrowly escaped with a 30-28 win with a last second touchdown. The highly anticipated matchup will kick off at 7:30 p.m. Dec. 4 at Booster Stadium.

It was a shock to see Dunnellon head coach Price Harris and other members of his team at Booster Stadium on Nov. 27 watching the Knights take care of business against the Blue Devils.

Having their Friday night freed up following the forfeit, Harris and the Tigers, knowing they would be matched up with the winner of the Vanguard-Clay game, were in attendance to scout their next opponent.

After their week off, the Tigers will visit Booster Stadium at 7:30 p.m. Dec. 4 as they look to improve to 2-0 against Vanguard this season.

With Dunnellon and Vanguard squaring off in a win-or-go-home matchup, this week marks the last in which there will be three Marion County football programs continuing their 2020 seasons.