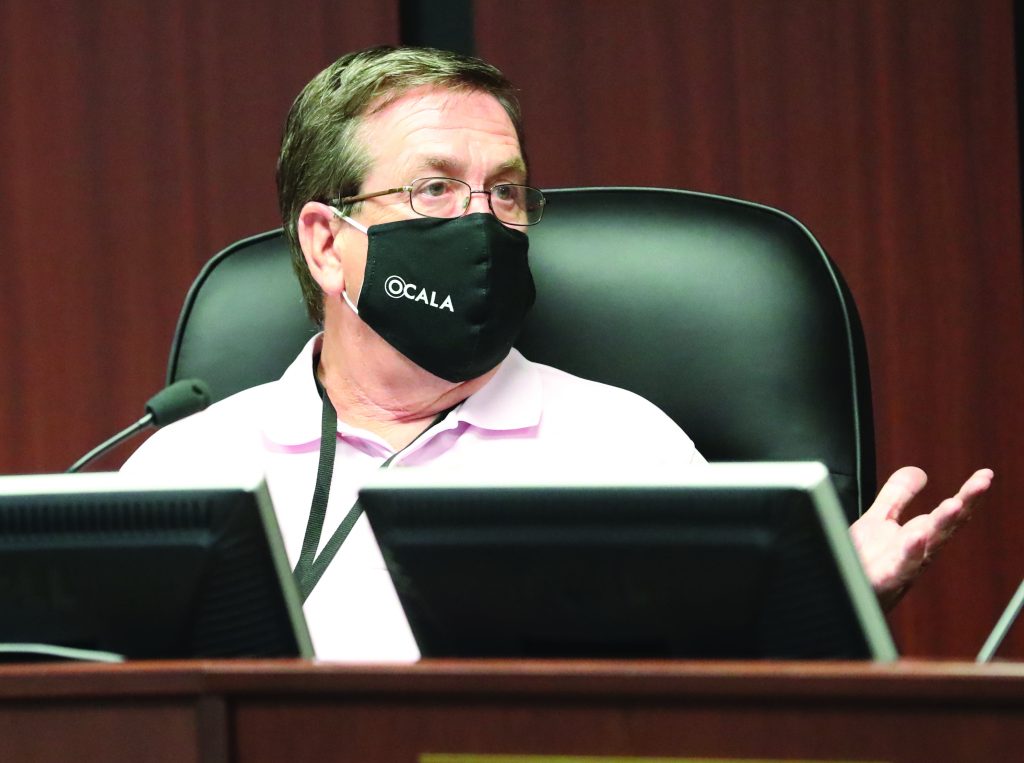 Council President Jay Musleh speaks during the Ocala City Council meeting at Ocala City Hall in Ocala, Fla. on Tuesday, August 18, 2020. The City Council passed an amendment to the mask ordinance on Tuesday and also voted to keep it enforced. [Bruce Ackerman/Ocala Gazette] 2020.

Well, the third time was not a charm.

The Ocala City Council on Tuesday voted again to pass a municipal mask mandate to help stem the growing spread of coronavirus in the city, but by the time the final vote was taken virtually all involved agreed the third and final version of the ordinance was “watered down” and had virtually no teeth.

“I would observe that this is a watered-down version of the previous ordinance, which was pretty watered down itself,” said City Council President Jay Musleh, who voted against the first versions of Councilman Matt Wardell’s attempt to make people in Ocala to wear face masks inside businesses and other public places.

The final version of the so-called mask mandate excluded houses of worship and other governments’ buildings from the ordinance and eliminated any sanctions for businesses whose customers do not wear a mask in their establishments. That businesses had been held accountable for their customers not following the mask mandate in earlier editions of the ordinance was a sticking point with some on the council.

While the ordinance still includes a $25 fine for businesses that do not comply with the ordinance, Mayor Kent Guinn, who oversees the police department, and Police Chief Greg Graham have both said police officers would not help enforce the ordinance and would never write a ticket. 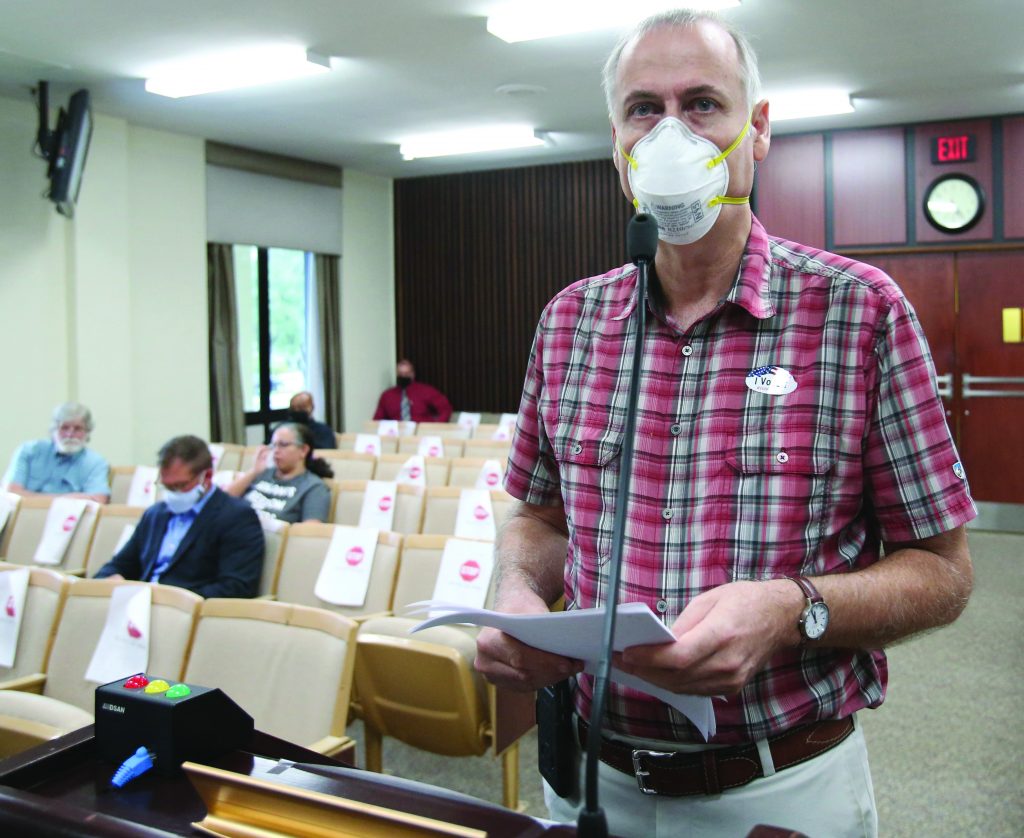 The final ordinance also has no sanctions for individuals who do not wear a mask.

All that is now required of businesses within the city limits is that they post a sign on their door declaring that masks are to be worn inside, according to city ordinance, and that they must announce that masks are required if they have an intercom system. Also, all employees of any business must wear masks. Business owners do not have to verbally request that customers wear masks as earlier versions had.

Resident Brian Creekbaum chided the council from removing houses of worship from the ordinance.

“From a public health standpoint, an exemption for houses of worship is insanity,” Creekbaum said.

Councilman Brent Malever, who had been a swing vote throughout the evolution of the mask ordinance, was the impetus for the third rewrite because he opposed houses of worship being included. That they were removed from the ordinance satisfied him.

Kevin Sheilley, president and CEO of the Ocala/Marion County Chamber and Economic Partnership reminded the council that his organization had been opposed to the first two versions of the ordinance but was supportive of the latest, watered-down version. “We certainly are for masks,” he told council members. 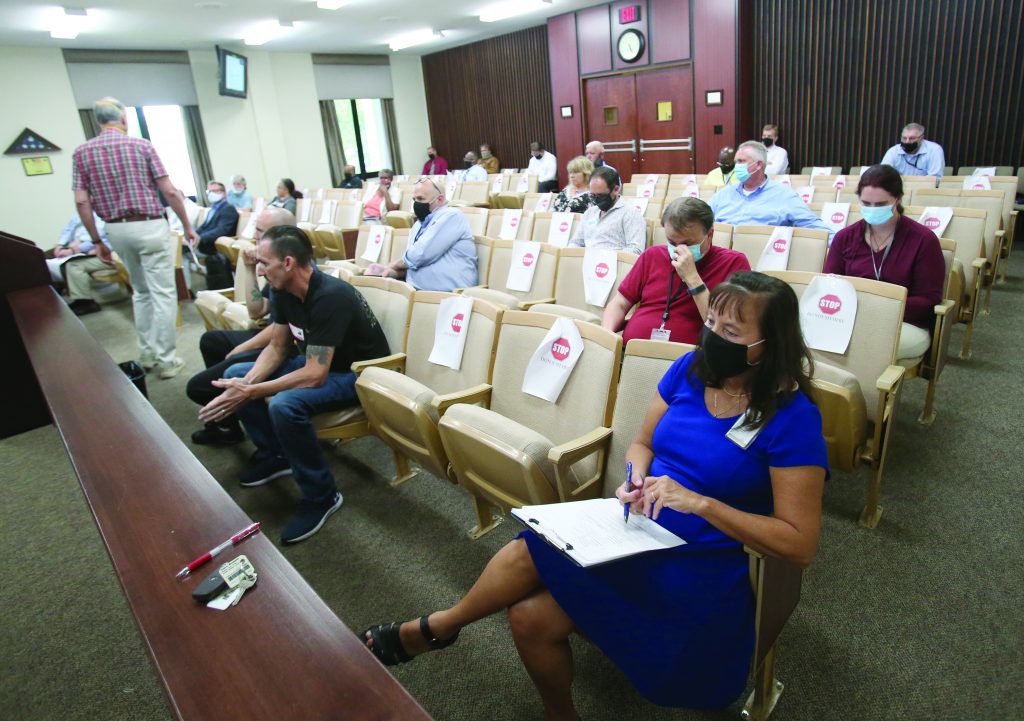 People practice social distancing during the Ocala City Council meeting at Ocala City Hall in Ocala, Fla. on Tuesday, August 18, 2020. The City Council passed an amendment to the mask ordinance on Tuesday and also voted to keep it enforced. [Bruce Ackerman/Ocala Gazette] 2020.

Wardell, for his part, was clearly displeased with the whittling away of the ordinance that he had presented as an “emergency ordinance” as Ocala/Marion County saw the number of coronavirus cases surge more than tenfold between July 1 and Tuesday night’s meeting. As an “emergency ordinance,” it required 4/5 of the council to vote in favor of the measure. That occurred on July 21, although the original ordinance was vetoed by Mayor Kent Guinn. The council overrode Guinn’s veto on Aug. 10 then made some modifications that softened the ordinance, which again passed 4-1. But Malever’s concerns about houses of worship led to Tuesday night’s third version which also passed.

A clearly weary and frustrated Musleh, who said he “was very much an advocate of people wearing masks,” ultimately voted for the final ordinance, declaring after casting his vote, “I’m not quite sure why we did not stick with the original resolution.” The council earlier this summer had passed a resolution urging residents to wear masks per the Centers for Disease Control recommendations.

Wardell responded that he believed the discussion over the mask mandate had resulted in greater public awareness about the need for masks and more people wearing them.