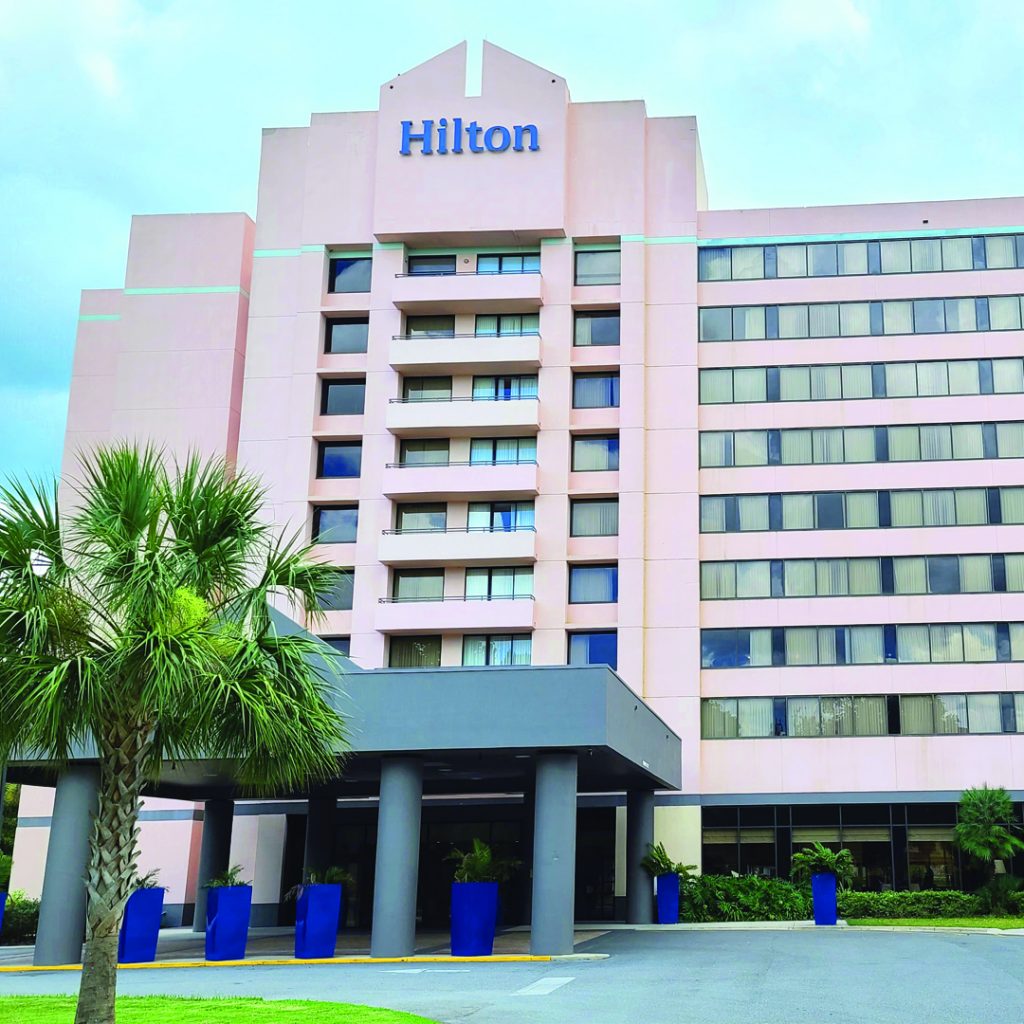 The Ocala Hilton is shown with an empty parking lot on State Road 200 in Ocala, Fla. on Monday, July 27, 2020. The hotel industry was very hard hit amid the COVID-19 pandemic. [Bruce Ackerman/Ocala Gazette] 2020. 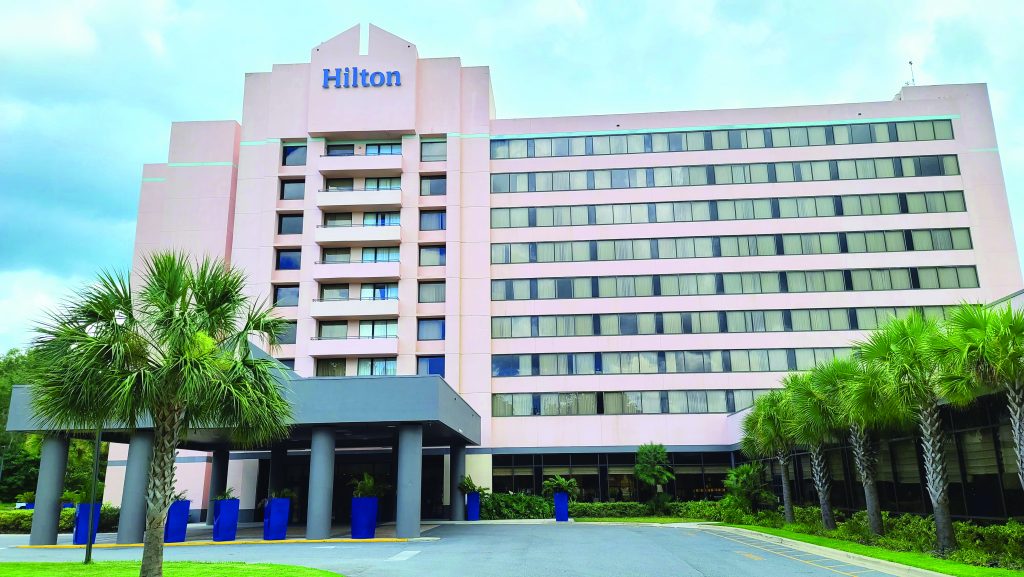 When the coronavirus first emerged as a national health crisis earlier this year, one of its first victims was the hospitality industry. People sheltered en masse and, as a result, they quit traveling and quit checking into area hotels.

After a disastrous couple of months, however, the local hotel industry has staged something of a comeback, although it is far from fully healthy.

In March of this year, when the coronavirus first entered U.S. lives, the state reports that hotels in Ocala/Marion County did $5.8 million in lodging sales. That is compared with $10.3 million a year earlier.

In April, local hotel sales plummeted to $2.8 million, down sharply from the same month a year earlier when the figure was $7.4 million. There was only slight improvement in May, when local hotel receipts reached $3.9 million, compared with $6.2 million a year earlier.

June of this year, the latest figures available, brought a continuation of a rebound for the hotel industry locally, with hotel receipts for the county jumping to $6 million, compared with $6.4 million in June last year.

Azim F. Saju, vice president and general counsel for the Ocala-based HDG Hotels, said the resurgent hotel occupancy numbers largely are due to “pent-up demand” after months of people sheltering in place.

“It’s the American spirit of wanting to travel and seek leisure,” said Saju, whose company owns 19 hotels in Central Florida. “You can’t keep Americans down.”

Another local hotel operator, Danny Gaekwad, said his hotels are seeing an increase in business as well, but he was quick to add that occupancy, while up, is still well below historic levels.

Both Saju and Gaekwad said the customers their hotels are seeing are domestic travelers and, in many cases, regional residents just looking for a weekend getaway.

For his part, Gaekwad said most of his hotel customers live within driving distance, and many are on short business trips. He said what is missing from his current clientele is “the long-term visitor.”

Saju said his organization has partnered with the hotel chains it represents to rewrite the rules for providing overnight accommodations. For example, instead of a breakfast buffet in the morning, hotel guests get a “grab-and-go” breakfast. In the rooms, “common touch points,” like pens, toiletries and writing paper, have been remove. Keyless entry, by way of a cell phone, has replaced room keys. 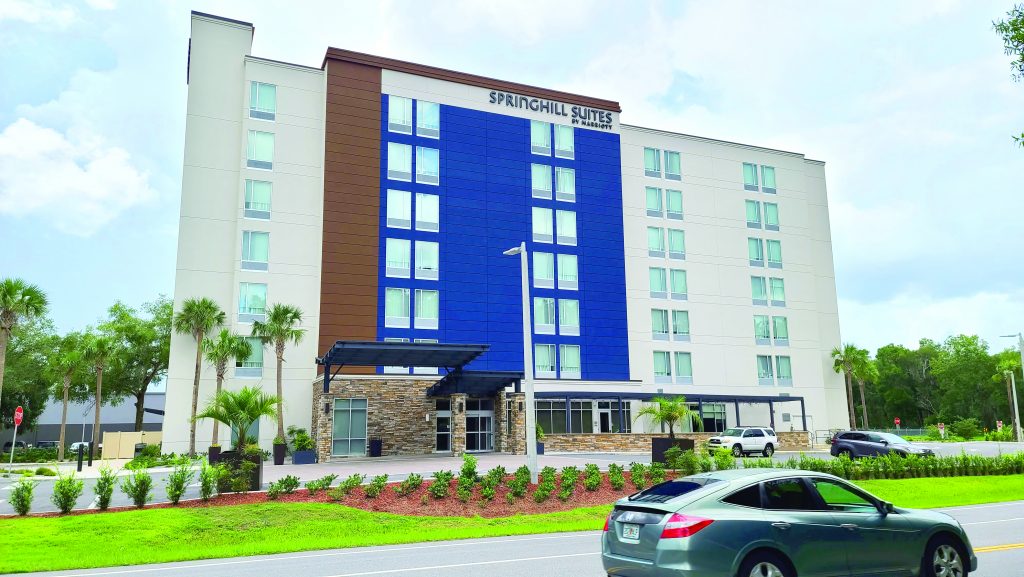 Moreover, Lisa Lombardo, chief people and culture officer for HDG, said hotels have always had intense cleaning protocols, but since the coronavirus has become part of everyday life, the major hotel chains have upped their game. Lombardo said rooms are more thoroughly cleaned and cleaners are now “hospital grade.”

Gaekwad, who sits on the board of VisitFlorida, the state’s tourism promotion agency, said the federal government’s Payroll Protection Program has helped his hotels weather the coronavirus storm, but believes the industry’s troubles are far from over.

“Everything is not dead,” he said. “But we are in the eye of the storm.”

But Saju remains optimistic that better times are sure to come.

“We don’t bet against the United States of America,” he said. “So, we definitely believe things will get better.”