The Spirit of ’76: Protecting us against the Putin Playbook 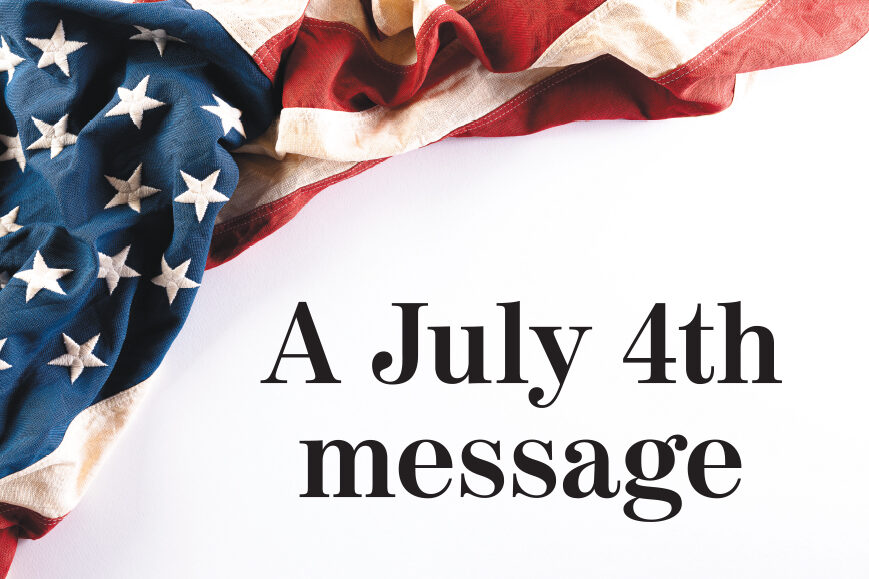 As we gather to celebrate Independence Day, it’s a good time to reflect on how our most fundamental freedoms have served this nation well.

It’s an even better time to think about what would happen if those liberties were taken away.

Sadly, the latter doesn’t take much imagination in 2022. Your closest video screen will show you scenes of Russian troops pummeling Ukraine with the support of a majority of the Russian people.

The Russian public has been told that their country is doing noble work ferreting out “Nazis” and that the West is engaged in its usual persecution of Russia and its people. Surveys say most Russians believe it.

In times of war, people always want to see their government as the good guys, but it’s still a little hard to grasp how that many people can be so thoroughly misled.

That’s the power of the Vladimir Putin playbook. The Russian president quickly and with little opposition eliminated the freedoms of speech and press.

Then he coordinated a plan with the national legislature to pass a law imprisoning those who “lied” about the war, including even calling it a war. Russian media of integrity had to close up shop, and international journalists in Russia had to temper their reporting.

That left the internet as the one avenue for Russians to learn the truth about their country’s misdeeds. Putin then banned social media outlets and sharply limited access to international news sites.

In short order, the Russian people were isolated, left to believe the lies of their government.

It took just weeks for Putin to wipe out freedoms of press, speech and dissent.

Could anything like that ever happen in the United States? As unlikely as it may seem, there are some areas of concern.

After all, over the past 60 years, certain presidents from both parties have been known to mislead the public about the purpose and progress of wars. And the use of “fake news” claims to evade responsibility began with politicians in this country, only to be adopted by totalitarian leaders around the globe.

Today there are active efforts to overturn New York Times v. Sullivan, the 1964 Supreme Court decision that made investigative reporting viable in the United States. And there are many politicians, again of both parties, who want to control how private social media companies are run.

Do I believe that America could fall victim to something resembling the Putin playbook? No. But it’s also no longer unthinkable.

It’s not a coincidence that the first step would-be dictators take is to shut down the press. That eliminates questions and accountability, both of which are anathema to those who abuse power.

There are some today who choose not to be informed, saying the media are biased. Well, there are tens of thousands of media outlets in this country, including manipulative cable channels, partisan sites that masquerade as news providers and those sites that would entice us with clickbait. But there are also many core news organizations of integrity, including The New York Times, Wall Street Journal, PBS and the very newspaper you’re reading right now. They’re the ones we need to support with readership and subscriptions.

From the very beginning of this nation, Americans understood the importance of a free press aggressively reporting on people in power. In an era when newspapers were fiercely partisan and unfair, that first generation of citizens still insisted on journalists being protected by the First Amendment.

That shouldn’t surprise us. After all, the model was right there in 1776 in the document we celebrate this week.

The Declaration of Independence called out King George III, reporting a list of injustices perpetrated by the mother country against its colonies. We had “unalienable rights,” it said, and they were being violated. Americans were no longer going to put up with this “long train of abuses and usurpations.”

That is the same spirit with which America’s free press has exercised its duties since 1791. Abolitionist newspapers took on slavery, suffragist papers focused on injustices against women and news organizations spanning centuries have reported on scandals, corruption and racial injustice.

We live in a highly polarized time, when it’s easy to dismiss the views of those with whom we disagree and deride those who publish the facts we don’t want to acknowledge.

We have to take care, though, that our internal political wars don’t turn us away from the core principles contained in the Declaration of Independence.

We remain a free people and need to be vigilant in protecting our rights and documenting the abuses in people in power, not just when the other guy’s party is in office. That’s the real spirit of ’76.

Ken Paulson is the director of the Free Speech Center, a non-partisan and non-profit center based at Middle Tennessee State University.