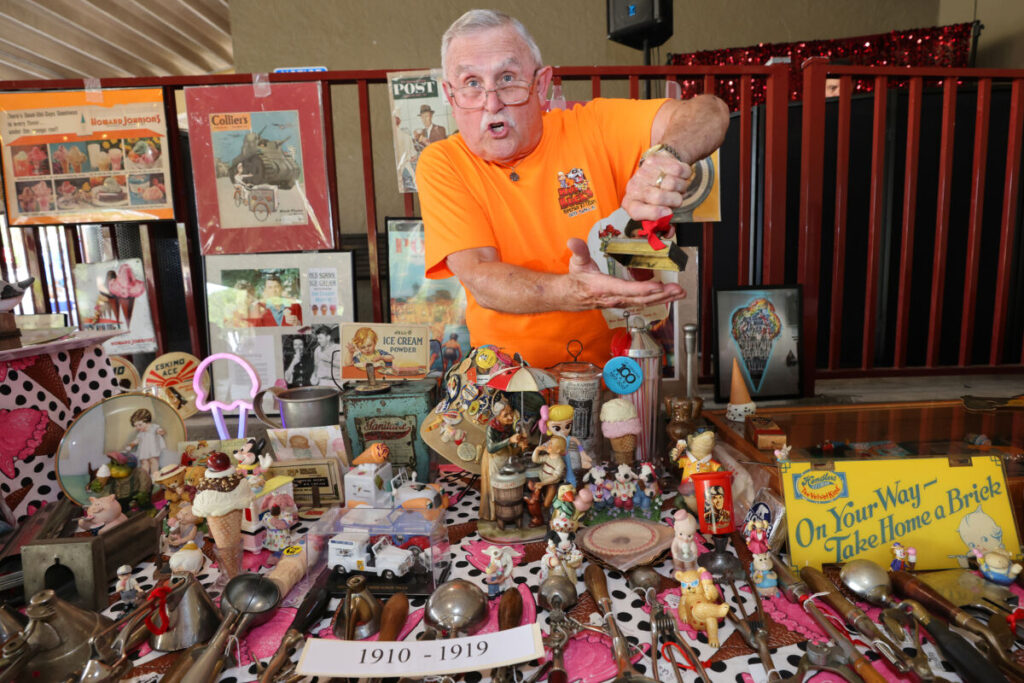 Jim Phillips describes how ice cream was pressed with a vintage ice cream wafer maker as he talks about his large collection of ice cream memorabilia at the Ocala Downtown Market on Wednesday, May 25, 2022. Phillips has collected hundreds of items related to ice cream and some date back to the late 1800s. [Bruce Ackerman/Ocala Gazette] 2022.

Jim Phillips has the scoop. Really. He probably has more than 300 of them.

We are talking about ice cream scoops. Scoops of all ages, shapes and sizes. Phillips has more scoops—and knows the history behind them all—than most people ever realized even existed. He is also extremely proficient in the history of ice cream. The two go easily together and Phillips loves to share the stories.

Many years have passed since Phillips served as best man at his best friend and Navy buddy’s wedding and was given an unusual antique ice cream scoop as a gift. He researched the scoop and found it to be one of nine sizes the manufacturer, Gilchrist, produced from 1910 to 1916. That piqued his interest and he started on the quest for the other eight, which he now has, in addition to others in his now vast collection. Initially, the Gilchrist scoops were made for only right-handed people. In 1914, Gilchrist patented a scoop for right or left-handed folks.

Phillips passed along information most people do not realize: On a Gilchrist ice cream scoop is a number, which coincides with the size of the scoop and tells how many scoops of ice cream you can get from a quart of ice cream with that number scoop. Other manufacturers of scoops have used the number system as well, but most modern ones do not.

As his interest in ice cream history and various scoops progressed over the years, Phillips acquired many unusual and even rare scoops, as well as much memorabilia about ice cream in general. The most notable, he said, is the Manos Novelty Co. of Toronto, OH, heart-shaped scoop. It is the only one of its kind and few were made by the company in 1925. Four heart-shaped ice cream dishes were made by the company and Phillips has them all. Currently valued at about $250 apiece, he found them at an antique store sale for $11 apiece 28 years ago. He said the scoop and dishes are among his personal favorites in his collection.

Such an enormous collection of scoops and ice cream memorabilia takes up a lot of space.

“Our kitchen is just full of scoops on every wall,” he said, as well as other places in their home.

Phillips does presentations in local elementary schools and for groups and organizations, such as a recent appearance at the Wednesday Market in downtown Ocala. At the school presentations, he usually has a girl and a boy see who can pile the most scoops of ice cream on a cone in a timed event.

Phillips’ wife, Connie, helps him pack the items to take to various events and sets up the displays with him, which usually takes about six hours, plus an hour-and-a-half to set up at the destination.

“She puts up with me,” he said, adding, “I couldn’t get along without her.”

At an event, Phillips explains the history of ice cream, first produced commercially in about 1850. Several presidents have had notable ice cream stories: When New York City was the nation’s capitol from 1785 to 1790, George Washington purchased ice cream for an event there.

“Martha Washington loved ice cream,” he said, and Thomas Jefferson once traveled to France and discovered they added vanilla flavoring to ice cream and it was considered a fancy dessert. He took vanilla beans he thought the French had produced back to her. He found out later the French got the beans from Mexico by way of Spanish merchants. 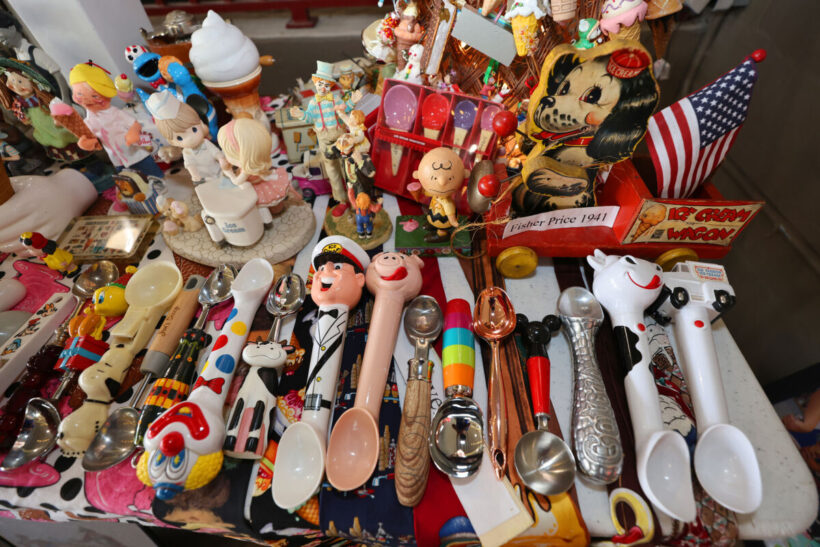 In the 1890s, “Blue Laws” became prevalent during the era of prohibition. When alcohol was no longer legal to sell on Sundays, bars lost revenue and started selling ice cream with various toppings on Sundays, thus the name “ice cream sundaes” was born.

At the St. Louis World’s Fair in 1904, ice cream was served on paper plates and cups which produced much waste at the fair. Vendors ran out of the paper products and noticed a vendor making a waffle-type confection and they took those, rolled them up and put the ice cream in them.

The Phillips’ have been members of the “Ice Screamers” group since its inception. This year’s 40th convention will be in July in Morgantown, PA.

“They are a great group of folks,” he said.

Phillips is a retired Marion County prosecutor. Since his retirement, he has been instrumental in the Marion County Sheriff’s Office Cold Case Unit. He formerly was a prosecutor in Broward County and also was an instructor at the College of Central Florida police academy for 27 years.

The Phillips’ are very active in the community.