The honor system and the difference between disclosure and waiver 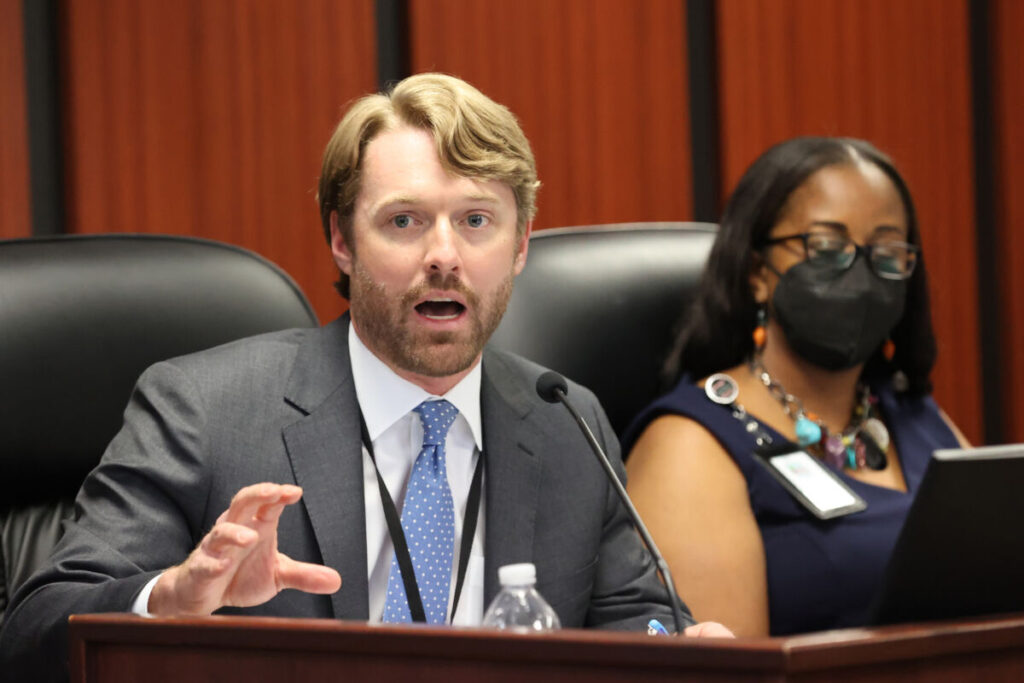 Back in January, the Ocala City Council met to vote on annexing 88 acres into the city. At that meeting, city attorney Jimmy Gooding disclosed to the board that developer John Rudnianyn, the owner of the property, was one of his firm’s largest clients. But on this night, Gooding said, he was only representing the city council.

The council agreed to the annexation. Fast forward to May 2 when the council met to consider approving a land use designation that would allow Rudnianyn to build nearly 1,200 units on the annexed land in a proposed development called Lake Louise. The designation would allow him to build many more units than would have been allowed had the property remained subject to Marion County’s rules.

Before they voted, Robert Batsel, Jr., who works with Gooding in the firm that represents the city, felt the need to give a much longer disclosure statement. The Gazette, which has raised concerns about potential conflicts of interest for the firm, offers Batsel’s comments in full for readers:

“I’m going to go ahead and disclose, obviously, as it’s been raised tonight, that my firm has done work for Mr. Rudnianyn, the applicant, in the past.

This goes against everything I typically counsel my clients to do, but I’m going to give a little explanation, not that it’s going to do any good, but just to hope in an attempt to settle any concerns on this front.

So, it has long been the case that we have had both the city as a client and private clients who do business in Marion County, and, from time to time, have issues with the city or need to be what we would call adverse to the city. Whether it’s a developer with an application pending in the city, a business in a bid dispute, whatever the case may be. It happens.

Conflicts and conflict checks are part of practicing law. And it’s long been understood that when those things arise: A) every one of our private clients absolutely knows and has a clause in their contract that says we represent the City of Ocala to the extent that you have anything adverse to the City of Ocala, not only can we not represent you but that we are going to represent the City of Ocala against you. B) City council and city staff have always understood this dynamic and understood that if we’re dealing with city staff on a project, and, for example, the applicant was Mr. Rudnianyn, typically we don’t have much involvement at the staff level unless things arise to being legal in nature. But when we do, if we’re asked to intervene and weigh in, they understand and are reminded, if they don’t already know, which in almost all cases they already know, because we’ve been through it a million times, but we remind them that we represent Mr. Rudnianyn in other matters, but in this case, we’re only representing the City of Ocala.

Then, in a public hearing, if it comes up and we’re asked to weigh in, we once again remind city council, like I’m doing now, although usually much more briefly, that we represent the applicant in other matters that have not been involved in this matter. Or if we have been involved, we tell you that we have. That’s long been accepted. It’s in our contract. It’s obviously recently been a big issue that some portray as a wrongdoing on our part. That’s been pretty difficult for me because as attorneys, we stake our reputation on our integrity and our character. And I know that I’ve never violated the code that I live by, much less the Florida Bar rules of ethics.

Just because someone has an opinion or the ability to write something online…We are in an era where we have an obligation to police ourselves and understand that while 150 years ago we may have been in a situation in society where I’ve used…I’ve heard this metaphor before…one of the predominant problems in society may have been a lack of food, now we’ve got a bunch of people who are obese or have Type 2 diabetes and food is no longer in short supply.

Information is similar in nature. Twenty years ago, we probably all didn’t have enough information at our disposal. And now, it’s great that we have all sorts of different “media outlets” in the world that will give us all the information we want to consume. But I am here to tell you that is false.

I represent John Rudnianyn in other matters. The case before you tonight, I have not represented the city. I rendered an opinion concerning the annexation, but I’ve been in no way involved in this land use matter.

I’ll back away from what you can tell is me being a little bit miffed about the way things have been misrepresented publicly but just tell you that in relation to this matter, that’s where we stand.

With all of that said, if you all have a problem with our current situation and how we address conflicts, as I’ve just described, please tell me. We’ll talk to city management and we will go about it a different way. Every time this arises, we hire outside counsel if it’s an issue.

Finally, I want to remind you that this was not an issue since 1992, and only recently became an issue when I affirmatively came to the city and told you that due to the growth in Ocala, and due to some changing circumstances, I was not going to reapply this coming fall. So, it was me coming to you to say I need to pick a lane and I feel that I need to take my practice in another direction despite my love for the city and the people that I work with. And apparently, now I’m the one with a stain on my hands. So, that’s enough; I’ll never address it again. I shouldn’t have done it in the first place. Couldn’t stand the people shouting at me. And I failed to accept the advice that I’ve given most of you in the past, but I had to say it.”

It’s fair to assume that while Batsel was speaking to the council, he was directing his ire toward this newspaper. So, allow us to respond in a similar public forum.

First, let’s address why the public absolutely has a legitimate interest in knowing about Batsel’s law firm’s financial connections to developers doing business with the city. When the law firm that has represented the city for 30 years says it makes twice as much an hour from its developer clients than it does from the city, it’s fair to wonder if both clients are receiving the same level of advocacy when their interests don’t align.

We also question Batsel’s assertion that Ocala, which pays his firm $1 million a year, has no choice but to accept potential conflicts of interest because his is a small law firm that needs other clients to survive. Since the city’s legal services have not been up for bid in 30 years, there is no open market challenge to the firm’s claim that they can’t survive without conflicting clients.

Next, let’s get into the legal weeds a bit by considering the difference between the words disclosure and waiver.

Disclosure is defined by the Oxford dictionary as “the action of making new or secret information known.” Batsel said he has disclosed potential conflicts between the city and other clients for years. But it was only in October 2020, after 28 years of being the city attorneys, that the firm added a conflict waiver clause to its contract with the city. The clause says, in short, that the city attorney had advised the city, and the city is aware that the firm also represents “private persons and entities” that include “developers or contractors” who “have relationships with, or seek approvals from, [the] city.”

Not one council member or city staffer was told about the new clause and everyone was quite surprised by it a year later when asked by the Gazette.

Since there have been no memos in the public records detailing any specific conflicts over the past 30 years, it appears this disclosure arrangement has been entirely on the honor system. In other words, any potential conflicts have been Batsel’s secret to disclose.

However, disclosure alone would not cure any conflict of interest between the city and developers because it doesn’t include waiver with “informed consent” by the client, the City of Ocala.

Rule 4-1.7 of the Florida Bar Rules & Standards, related to professional conduct of lawyers, states: A lawyer must not represent a client if the representation of one client will be directly adverse to another client, or if there is a substantial risk that the representation of one or more clients will be materially limited by the lawyer’s responsibilities to another client, a former client or a third person, or by a personal interest of the lawyer.

We’d also like to address Batsel’s assertion that what the Gazette has reported is “false.” The newspaper has repeatedly asked the firm to detail any inaccuracies so the Gazette could have the opportunity to print a correction, if warranted. Merely stating that a report is false does not make it so.

We recognize this situation may be difficult for some city council members. After all, the city has had a relationship with this firm for decades and raising concerns about ethics may appear unseemly. Here’s a suggestion: Reach out to an independent law firm for a legal opinion. The council, and the taxpayers, deserve to have an arm’s-length assessment of the risks the city may be facing.

Not seeking an outside opinion or not instructing the city’s auditor to look into the arrangement fuels questions in the community. Chief among them are, why not? What are you afraid of finding?