The business of economic development

A look at how local government and the CEP managed recent development deals at the Ocala/Marion Commerce Park. 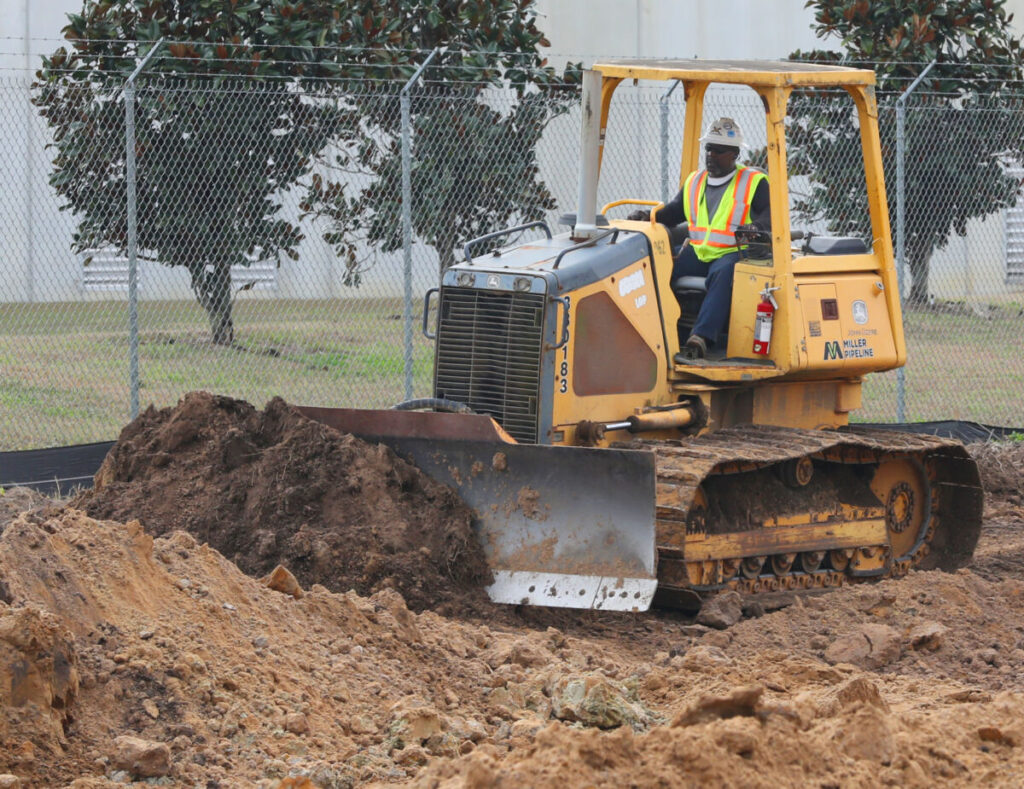 A worker with Miller Pipeline operates a grader at the construction site for a new, planned warehouse or possible distribution hub in the Ocala/Marion County Commerce Park near the intersection of Northwest 35th Street and Northwest 27th Avenue in Ocala, Fla. on Monday, February 7, 2022. The planned, $14 million and nearly 400,000-square-foot warehouse, is being built on speculation at The Ocala/Marion County Commerce Park. [Bruce Ackerman/Ocala Gazette] 2022.

The first time the City of Ocala agreed to be a pass-through for a real estate development deal at the Ocala Commerce Park was in 2016 with AutoZone, for the purpose of building a logistical hub for the company.

In the deal, Ocala 489, LLC, an entity owned by William Kearns and Joe Nisbett, would sell 60 acres in the Ocala/ Marion County Commerce Park valued at $9 million to the City of Ocala for $3 million in cash ($50,000 an acre) and the tax benefit of an in-kind land donation acknowledged by the city for $6 million.

The same day that transaction closed, the city would sell the parcel to AutoZone for $3 million.

The AutoZone’s parcel, now valued at more than $27 million, has generated $1,528,490.14 in real estate property taxes since 2019, according to the tax appraiser’s website.

The second time the city agreed to be a pass-through was for Peak Development, a developer out of Tampa, that desired to build a logistics facility on speculation next door to AutoZone in the commerce park. The deal was approved by the city council at the start of the pandemic in March 2020, but wouldn’t close until December 2020.

At closing, the same principals Peak Developers assigned their interest in the property to a holding company, similarly named to the original landowner- Ocala 489 Logistics.

There was no separate developer agreement between the city and Peak Development, or the assigned entity Ocala 489 Logistics, requiring the build of the facility in exchange for the benefit of the bargain the city facilitated.

Jimmy Gooding, the city attorney who handled the closing, confirmed to the Gazette that Peak Developers was not required to enter into a developer agreement with the city for the benefit of their bargain.

Gooding said that those type of agreements only become necessary when the city is spending money to accommodate a developer such as building a road or hooking it up to water.

In the two interviews Gooding had with the Gazette about this real estate transaction, Gooding confirmed he had no other business between his firm and Peak Development but gave conflicting information about his relationship to Kearns.

First, Gooding called Kearns “a friend” and indicated that he did not represent him. But when asked in a second interview why Kearns would indicate that Gooding had done work for him, Gooding clarified that he had done work for an entity Kearns owned unrelated to the commerce park years earlier and was currently negotiating a deal with Kearns through another attorney.

Over the next year, the land would be cleared, and permits were pulled, but the property would then be sold by Ocala Logistics 489 to another entity MDH F2 Ocala 35th St., LLC, a Delaware limited liability company for $3,481,250 ($125,000 an acre), generating more than $2 million dollar profit to the developer who enjoyed the benefit of the deal the city facilitated as a pass-through.

MDH partners, who describes itself as “Atlanta- based real estate investment company managing its discretionary funds targeting industrial real estate across the United States on behalf of its institutional investors,” sent out a press release touting the purchase of commerce park parcel “with plans to construct Ocala Logistics Center on a speculative basis.”

In the press release, it stated that MDH engaged Peak Development Company out of Tampa, FL, the original buyer contemplated by the city, to “act as the development manager for the project.”

The press release described Ocala as “an up-and-coming market that is just beginning to witness significant institutional industrial investment.”

In addition to the easy access to I-75, MDH describes Ocala as having a “deep labor pool” and “a lower-cost alternative to tenants who are seeking space “in the highly competitive I-4 corridor.”

In a recent interview, Kearns, one of the main principals of Ocala 489 who sold the property for less than half its value, said he had no knowledge of the recent resale of the property from the initial developer to MDH but laughed good-naturedly and said, “maybe I should have held out a little longer.”

Kevin Sheilley, CEO of the Ocala/Marion Chamber and Economic Partnership (CEP) said that the parcel will also be built out on speculation- a 450,000 square foot logistics center. Sheilley indicated that in this deal- no government incentives were offered.

Only one 15-acre parcel is left in the Ocala/Marion Commerce Park, owned by Ocala 489.

According to Sheilley, there remain hundreds of more acres in different industrial parks throughout Marion County, and he’s seen an uptick in companies wanting to find space already built.

“Historically 65% to 75% of the companies who we dealt with were looking for an already built space, but because of supply chain concerns and the speediness in which they need to make a decision that percentage has jumped to 90%,” said Sheilley.

Sheilley explained that while the CEP is instrumental in bringing interested parties to develop the different commerce parks, they leave it to private parties to work out the deal between themselves, and then the CEP, in hand with city or county government staff, vet the companies and assess whether an incentive should be offered.

Sheilley said that the decision to give an incentive to a company is based on an evaluation of their job creation and wages and is usually not available to those building on speculation- even though the improved land can generate increased tax revenue.

The CEP has a financial interest in helping facilitate sales in the industrial park.

Not only are they paid $465,000 by the city and county governments for their efforts towards economic development, but the CEP also benefits from high-dollar partnerships by these same companies that move to Marion County.

“We are an organization made up of businesses. So of course, we hope they join- but there is no direct quid per quo between our economic development efforts and businesses becoming members of the CEP,” said Sheilley.

Kearns, one of the original principals of Ocala 489 who started the Ocala/ Marion County Commerce Park in an agreement with the city and county more than ten years ago had high praise for Kevin Sheilley “he’s the best salesperson Marion County has.”