The bold fragility of horses through an expressionistic lens 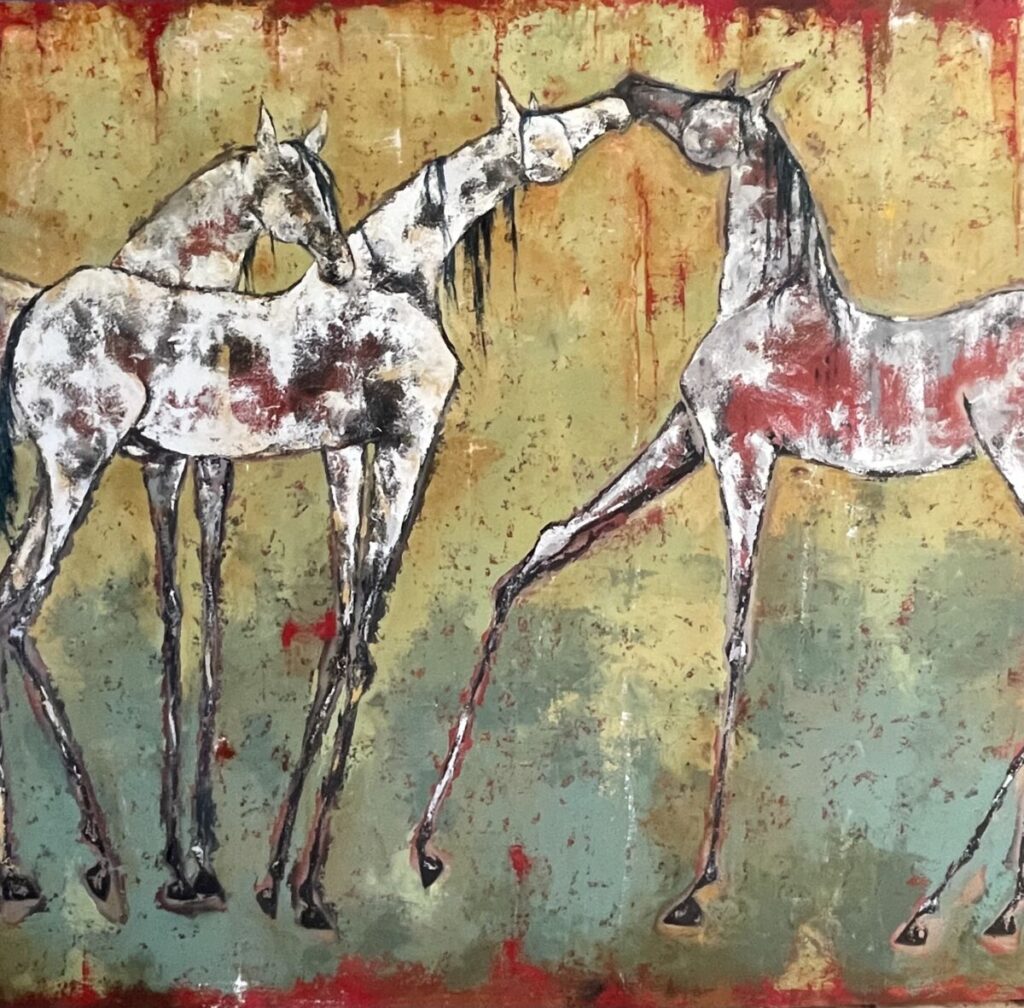 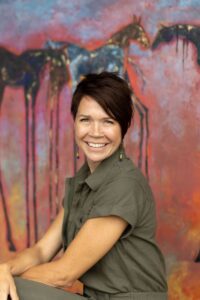 We all can relate, especially those of us who have bred horses, to the unbridled joy we feel at full gallop.

Or maybe you have noticed the form a silhouette of a horse makes through the reflection of a puddle or through raindrops on a window.

All of the above and more imbue the expressionistic paintings of Cara Van Leuven, whose first-ever solo show, “Horses with Long Legs,” can be seen at the Marion Cultural Alliance’s Brick City Center for the Arts (aka “the Brick”) through Jan. 31.

Van Leuven’s equine love goes to back to her childhood. At 9, she began taking riding lessons. She showed in hunters and in the jumper ring. In her teens, she studied photography and was fascinated by how a slight turn of one’s face or the elements of a background could inexorably change an image. That focus on delicate detail and background would stay with her throughout her career.

A rebel at heart, Van Leuven also delved into hip-hop and graffiti, indulging an appreciation of multicultural and counter-cultural explorations.

After studying photojournalism at Western Kentucky University, the artist worked in media design, marketing and project management. Things changed drastically, however, during the economic downturn of 2008.

“When the recession hit, I lost everything,” she said.

As luck would have it, the hardships spurred a change in direction and the reunion with horses that Van Leuven’s spirit had been long seeking.

“I had never picked up a paintbrush until I finished my first painting in 2011,” she said. “I didn’t take art classes, but I was always very creative.”

In her early thirties, Van Leuven relocated to St. Louis and lived in an artists’ loft. 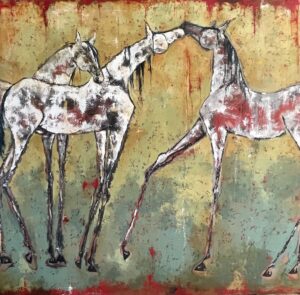 “There were just canvases all over this place,” she recalled. “There were probably no more than 10 people living in this entire building but hundreds of canvases everywhere. So we would take what we could find and just paint over it. And because there were stories behind every painting, there was this great texture.”

To pay the bills, she became a carriage driver, which reunited her with horses.

“It was such a cool job,” Van Leuven effused. “I was having the time of my life. Nobody gets on a carriage in a bad mood. You were around horses all day, and if you were good to those horses, they would give you their heart and soul.”

When the economy rebounded, Cara found design-project work again, but it didn’t make her heart sing the way those horses did.

“When I did get back into corporate, especially when I was doing those contract gigs, I was making very good money, but even working part-time and flex hours, even though they were so good to me at these gigs, I would get so depressed. I just didn’t thrive in a structured environment like that,” she said.

An artistic mentor persuaded Van Leuven to paint her horses full time, and she hasn’t looked back. She credits the assistance of husband Tom York, the “business man” of the pair, for his role in her early success.

The couple rent a farm in Micanopy with glimmering views of the Orange Lake Preserve. They’ve brought with them two border collies, Buck and Shiloh, two mares and a miniature horse.

“Penny is a red mare, a Chestnut mare, and they have a reputation,” she said, adding that the other, Sketch is a a dark bay. Easel is the mini. 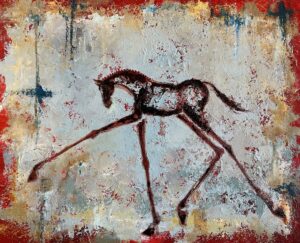 “I do like horses that I feel reflect me,” Van Leuven shared, “and so maybe my horses were challenging, or they didn’t have the same start in life as everybody else, but I saw a lot of potential in them.”

“Challenging” and a “little wild” could be used to describe Van Leuven and her works. Like the artist, they are also a little gracious and gentle in demeanor and sophisticated. Midcentury-modern design peeks through her works’ muted but rich colors, clear lines and simple organic forms.

The works of Mark Rothko (1903-1970) inspired her to experiment with materials and use homemade pigments. In “Old Enough to Know Better,” which features three maturing horses in a tender pastoral exchange, a deep-red “secret” pigment shades and streaks, suggesting a love of horses that goes blood deep or, perhaps, the dappled light of an intense Ocala sunset.

Varying interpretations complement the artist’s backstories. In a literal sense, the paintings offer more than paint beneath the surface. Along with thick-but-refined strokes, guided meticulously by a pallet knife, grains of sand, a little hay, horse hair and other flotsam and jetsam blows through the barn’s breezeway right onto Van Leuven’s paintings.

So, why the long legs?

The artist revealed that she once had a mare named Hazel who fell ill often and had to be euthanized at the age of 5. Her melancholy comes through in the painting of “Dream Gait,” a personal favorite.

“The longer the legs, the bigger my vets bills were during the creation of the painting,” she said.

With fragile beauty, deep intense color and an element of the expected, Van Leuven experiences horses with a bold vivacity that’s relatable to local equestrians.

“Ocala is a magical place for me,” she said.