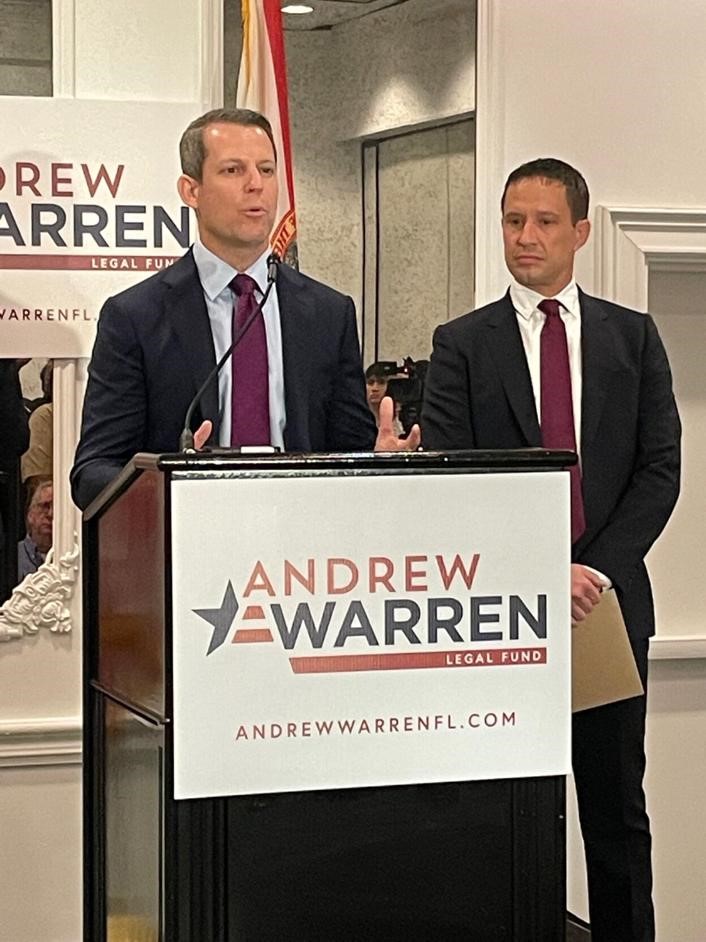 Suspended Hillsborough County State Attorney Andrew Warren took Gov. Ron DeSantis to federal court Wednesday in an attempt to get his job back.

After filing a lawsuit in the federal Northern District of Florida, Warren, a Democrat, said he also wants to test the governor’s ability to remove elected officials from office over policy differences.

“It’s not surprising Warren, who was suspended for refusing to follow the law, would file a legally baseless lawsuit challenging his suspension,” DeSantis spokeswoman Taryn Fenske said in an email. “We look forward to responding in court.”

The lawsuit came two days after the Senate gave Warren 15 days to request a Senate hearing to determine whether he should be reinstated or removed from office. A letter from the Senate, however, also said that if Warren launched a court challenge, the Senate process “will be held in abeyance by President (Wilton) Simpson until a final determination in the litigation has been rendered.”

DeSantis suspended the twice-elected state attorney on Aug. 4, citing a pledge by Warren to not enforce a new law preventing abortions after 15 weeks of pregnancy. Also, DeSantis pointed to Warren’s opposition to criminalizing types of gender-affirming treatment for transgender people.

“The governor lives in a political arena where he can say things that are just disconnected from the truth,” Warren said. “As a prosecutor, I’ve spent my career in a court of law where facts matter, or evidence matters where the truth matters.”

The lawsuit also seeks to test if DeSantis properly exercised his powers in suspending Warren for alleged “incompetence” and “neglect of duty.”

In suspending Warren, DeSantis said the prosecutor had put himself “above the law” in signing the pledge about not enforcing the abortion law.

The pledge was attached to a letter published in June by the organization Fair and Just Prosecution, which bills itself as bringing together elected local prosecutors to promote “a justice system grounded in fairness, equity, compassion, and fiscal responsibility.”

In signing the pledge Warren joined more than 90 prosecutors from various states, some of which have enacted abortion limits similar to the Florida measure. The Florida Legislature passed the 15-week abortion restriction this spring, and DeSantis signed it in April. Providers could face third-degree felony charges for breaking the law.

DeSantis said Aug. 4, while on Tucker Carlson’s Fox News show, that Warren was suspended for having signed letters “saying he wouldn’t enforce law against transgender surgeries … laws protecting the right to life.”

The lawsuit said Florida doesn’t have laws regarding transgender surgeries and that no cases have been referred to Warren’s office involving requests to prosecute abortion-related crimes. Warren was first elected in 2016.

In the lawsuit, Warren is described as a critic and political rival of DeSantis, “specifically on the subjects of criminal justice administration, abortion, and the rights of transgender people.”

The two clashed in 2020 when Warren supported the arrest of a church pastor over holding services during the early stages of the COVID-19 pandemic. Warren also has been a critic of a 2021 DeSantis-backed law known as the “anti-riot” law, which Warren said undermines rights to free speech and assembly.

In describing DeSantis’ actions as politically motivated, the lawsuit said that the night before Warren’s suspension, a spokeswoman for the governor tweeted, “Major announcement tomorrow morning from Gov. Ron DeSantis. Prepare for the liberal meltdown of the year. Everyone get some rest tonight.”

DeSantis appointed Hillsborough County Judge Susan Lopez to replace Warren as state attorney. She quickly reversed actions by Warren, including a decision not to pursue the death penalty for Mathew Terry, who has been charged with first-degree murder in the death of a Ruskin teacher.