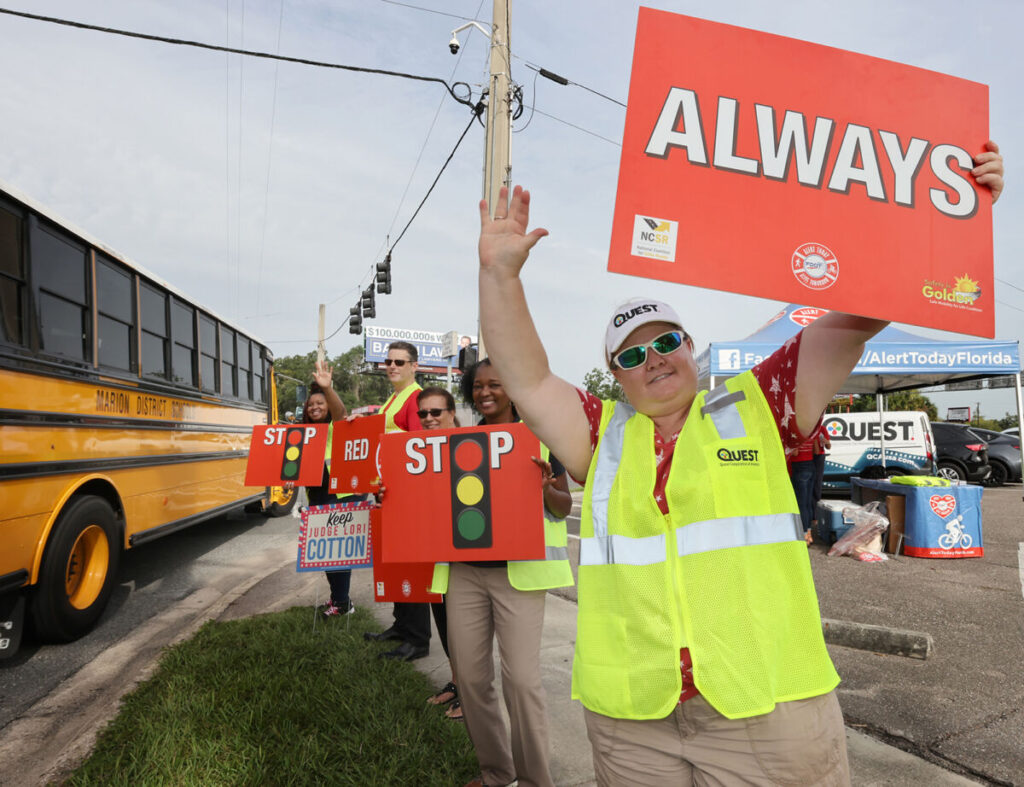 Sara Shepherd of Quest Marketing and Communication and a FDOT consultant, right, holds signs with, from left: Shakayla Irby, of the Ocala Marion Transportation Organization, Rob Balmes, of the TPO, Liz Michell, of the TPO and Cynthia Barnes of Marion County Public Schools, as they spell out Always Stop On Red to raise awareness about the dangers of running red lights in the intersection of Pine Avenue and Silver Springs Boulevard in Ocala, Fla. on Thursday, August 11, 2022. The Ocala Marion Transportation Planning Organization and the Florida Department of Transportation partnered with the National Coalition for Safer Roads to support National Stop on Red Week in August. In the last four years, there have been 910 red light running crashes reported in Marion County, 63 of those crashes resulted in a death or serious injury, according to a press release from the Ocala Marion TPO. [Bruce Ackerman/Ocala Gazette] 2022.

National Stop on Red Week was created by the Federal Highway Administration to educate drivers about the dangers of red-light running and to reduce the number and severity of traffic crashes. The week was observed from Aug. 7-13 this year.
On Aug. 11, the Ocala Marion Transportation Planning Organization (OMTPO) and Florida Department of Transportation (FDOT) partnered with the National Coalition for Safer Roads for an Always Stop On Red event at the intersection of Silver Springs Boulevard (State Road 40) and Pine Avenue (U.S. 441) in downtown Ocala.
Red was definitely the color of the day during the rally, with participants holding up bright red signs and many of them dressed in red as well.
In the last four years, there have been 910 red-light running crashes reported in Marion County and 63 of those resulted in a death or serious injury, according to the OMTPO.
An FDOT official said the agency encourages everyone to help save lives and protect those around you by following the rules of the road and “always stop on red.”