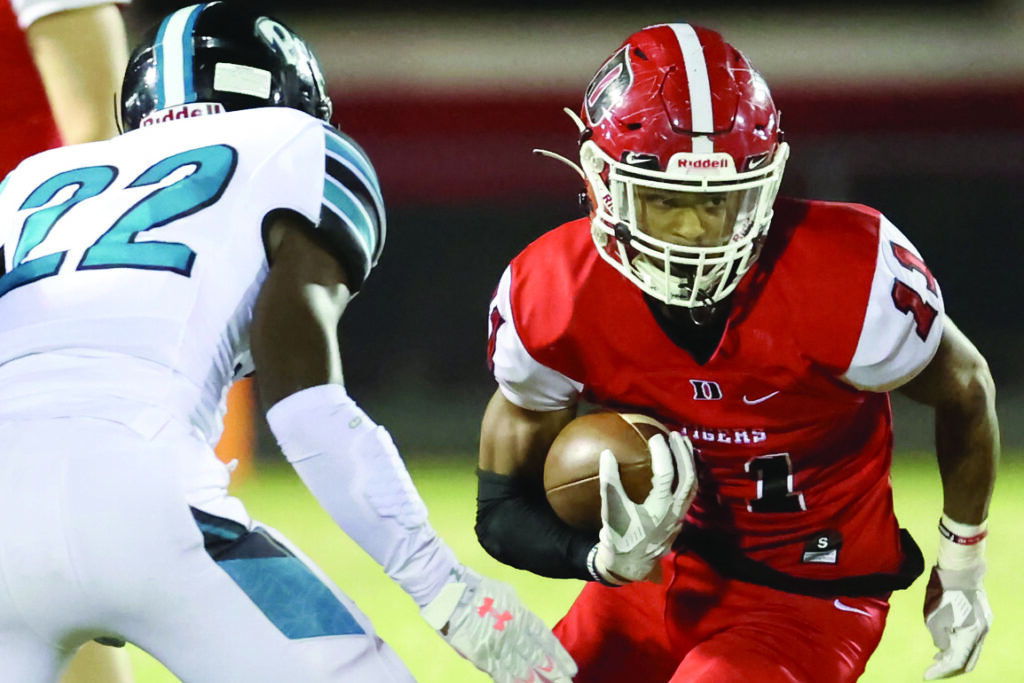 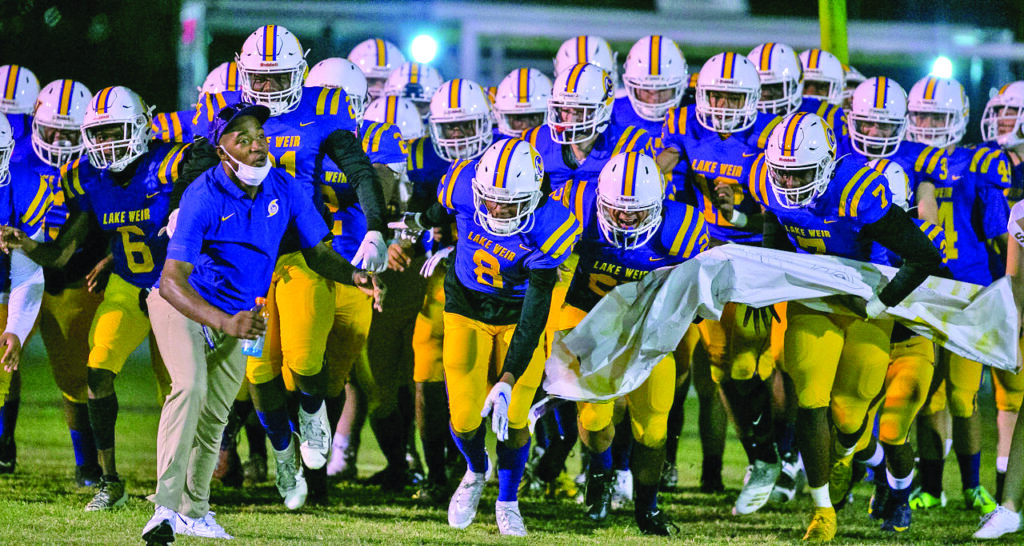 The Lake Weir Hurricanes storm the field minutes before taking on Forest High School Friday, Nov. 6 in a game won by Forest. [Alan Youngblood/Special to the Ocala Gazette]

Regular season play ended last week with a multitude of high-scoring blowouts as the top teams steam into the postseason.

Dunnellon remained undefeated at 6-0 as they stomped the West Port Wolf Pack 35-0.

Forest’s offense was simply too much for Lake Weir as the Wildcats blanked the Hurricanes 38-0.

Meanwhile, although Belleview had homefield advantage for their final game of the season but was blanked by the Vanguard Knights by a final score of 30-0.

Here is a closer look at the action from the last games of the regular season:

Entering the final game of the regular season, undefeated Dunnellon looked across the field at the West Port Wolf Pack, and although the Wolf Pack has played tough football this season, they were no match for the Tigers. 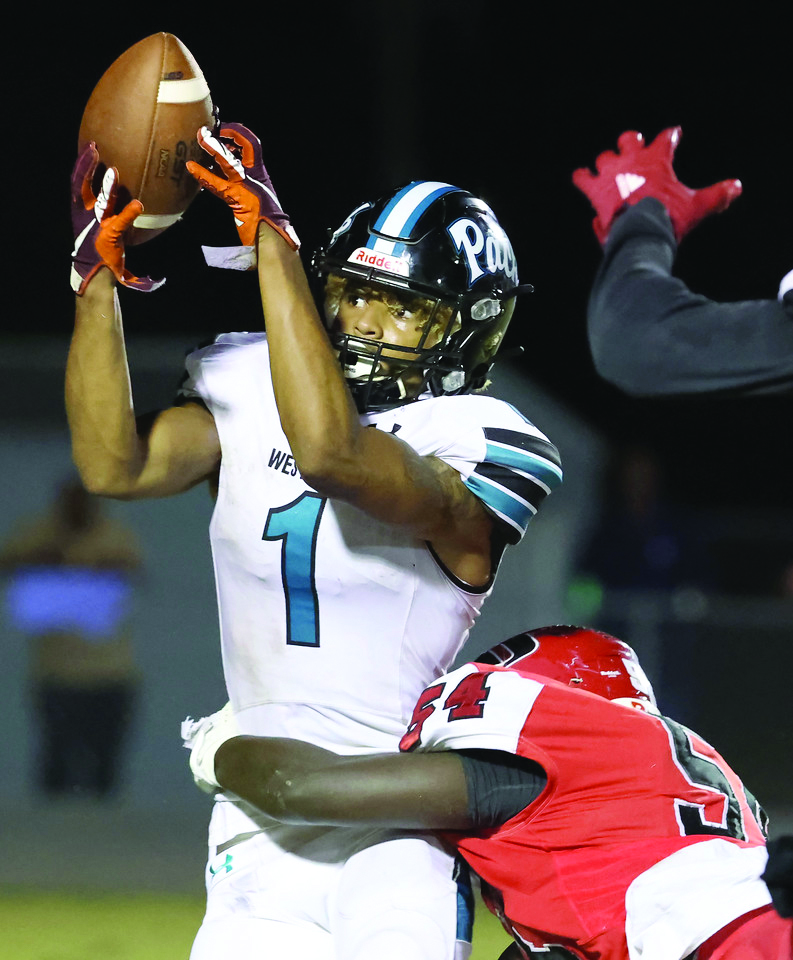 Throughout the season, Dunnellon has relied on their passing game to provide some game-changing plays. However, the tough West Port defense was able to hold the Tigers to just 53 total passing yards, although Shai’hem Thomas nabbed a beautiful one-handed grab for six.

With its passing attack grounded, Dunnellon’s offense was forced to rely heavily on their rushing game, and Demetrius McCants was up for the challenge with 94 rushing yards on the night.

McCants averaged a remarkable 13.4 yards per carry and contributed a touchdown on a 44-yard run. Adding to the Tiger’s rushing game was Christiaan Fashaw with 26 yards and another touchdown. Fashaw also contributed thirty receiving yards.

Rounding out the Tigers’ game on the defensive side of the ball were Avery Braden, Sam Wryals and Jermain Fashaw with seven tackles each.

Forest, coming off of a close loss to fearsome Dunnellon, was primed and ready to take on the Hurricanes of Lake Weir.

The Hurricanes struggled to a 1-4 record entering the game and were no match for the Wildcats.

In the first quarter, Forest was faced with a third down and five, and Antonio Crim came up big.  Following his blockers, he took what could have been simply a first down and ran for 43 yards, for a score.

The six points put up by Forest went unanswered and with a scoreless second quarter, Forest entered the second half with a narrow lead of 6-0.

The Wildcats stormed out in the second half, scoring 19 points in the third quarter and an additional 13 in the fourth.

The Wildcat’s offensive front was led by Crim, who had an epic game. Crim put up 160 yards rushing, which was more than half of the team’s total yards, and scored four of Forest’s five touchdowns. Quarterback, Stephen Curry led the passing game with 77 yards. His leading receivers were Izaiah Guy (38 yards) and Jamarrien Burt (18 yards).

Vanguard, having only lost to Dunnellon this season, improved their record to 5-1 with an easy win over winless Belleview. 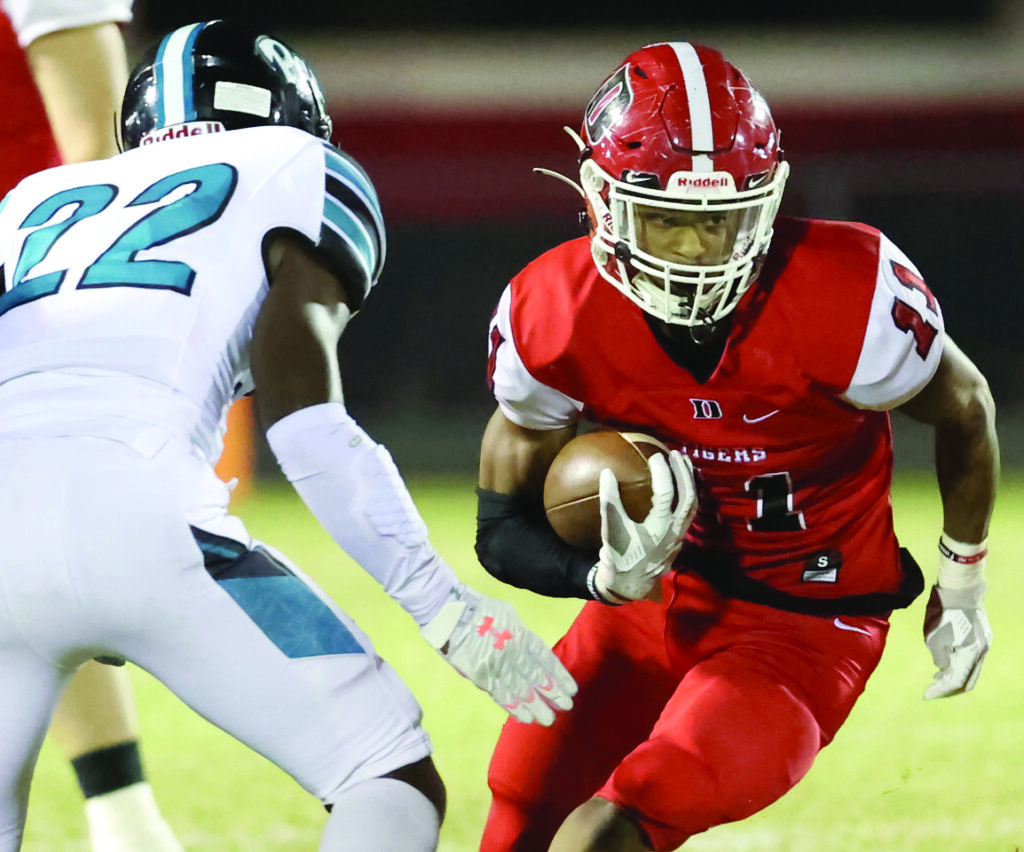 Opening strong in the first quarter, Alexander Law completed a short pass to Tony Johnson, who took it 68 yards for a touchdown. With a successful point after, Vanguard took the lead 7-0.

The Knights put another touchdown on the board with an interception by Trevonte Rucker, who followed a wall of blockers to the end zone.

While Vanguard’s assault was spread out across the board, Belleview’s Eric McLaughlin struggled to carry the Rattlers’ offense on his back with 94 rushing yards out of the team’s total 125 offensive yards.

On the defensive side of the ball Belleview’s Xavier Moore led the team with seven tackles, Andrew Davis, Elijah Turner and Cornelious Bentley-Greene contributed another five each.

Here’s a look at the postseason to date:

In the small Class A bracket, Ocala Christian Academy fell to Out-of-Door Academy on Nov. 6. The final score was 48-22.

Trinity Catholic was set to play Melbourne Central Catholic in the quarterfinals on Nov. 8, but Melbourne was forced to forfeit.

TC, therefore, advances to the semifinals and will face the winner between Taylor and Trinity Prep, who play on Friday. TC’s semifinal game will be at home on Nov. 20 at 7:30 p.m.

As the front runner out of Marion County, Dunnellon was scheduled to play Eastside in Gainesville on Thursday in a game that was likely to be postponed because of Hurricane Eta. Belleview and North Marion face off on Friday. 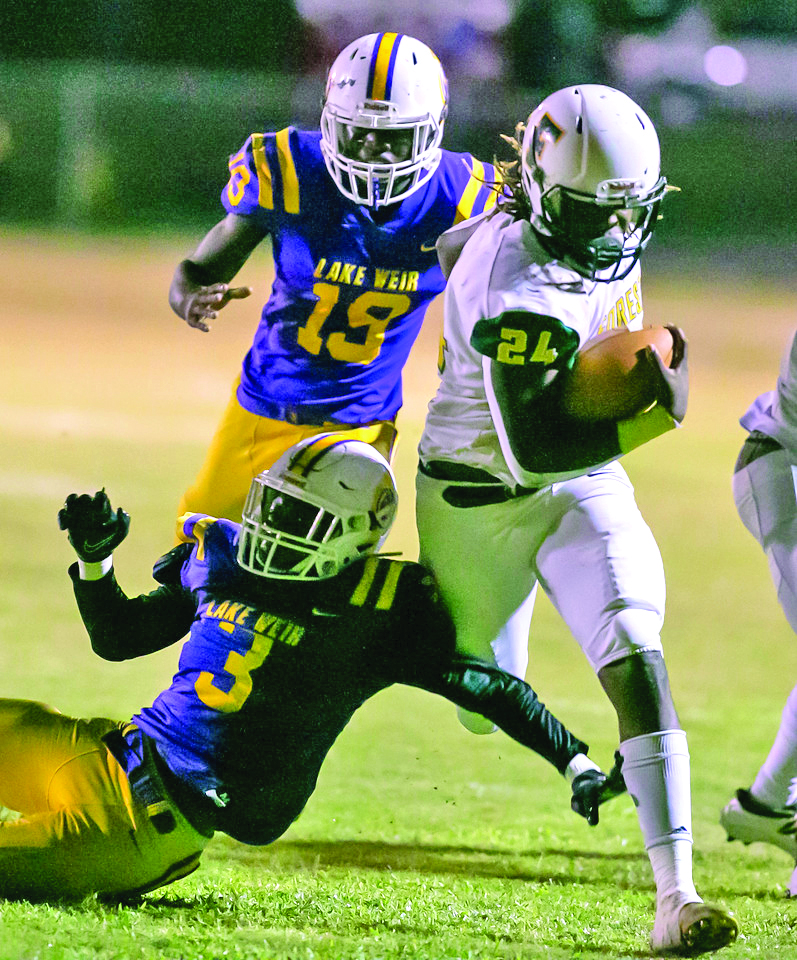 Forest High School running back Antonio Crim Jr (24) gets by Lake Weir High School Tyrese Terry for a touchdown as Forest blanked the Hurricane on Friday, Nov. 6. [Alan Youngblood/Special to the Ocala Gazette]

On the bottom half of the same side of the bracket in Class 5A are the Vanguard Knights, who play Crystal River on Friday. As Crystal River is currently at .500 with a record of 3-3, the Knights are heavily favored to move on to the quarterfinals, where they would face the winner of the matchup between Tavares and Ridgeview, who also played Friday.

Additionally in Class 5A, Lake Weir squares off against winless Atlantic out of Port Orange. If Lake Weir slips by Atlantic, they would proceed to the quarterfinals to play the victor between Clay and Leesburg.

As the sole team from Marion County in the Class 7A bracket, Forest will face Edgewater out of Orlando, who has a current record of 3-2. The two face off on Friday in Orlando.

Similarly, will see fresh teams in the playoffs, as the only Marion County team in Class 8A. With fewer teams in the bracket and a bye in round 1, West Port’s opening game of the postseason will be a quarterfinal game against the Hawks of Spruce Creek High School out of Port Orange. The Hawks have a current record of 3-3 and will travel to West Port on Nov. Game starts at 7:30 p.m.