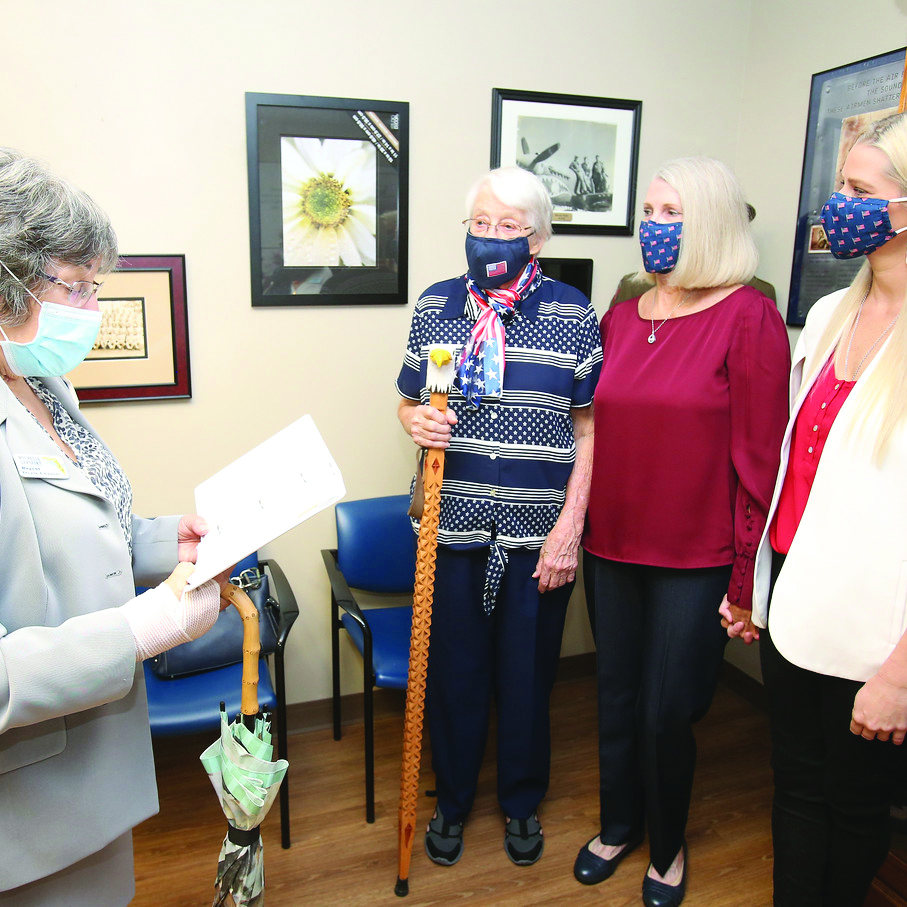 Rochelle Gerofsky, a regent with the Ocala Chapter of the Daughters of the American Revolution, left, reads a Proclamation to Betty Reeves, 96, second from left, and her daughter, Marsha Scott, third from left, before they were sworn in as members of the National Daughters of the American Revolution as Leslie Wengler, their granddaughter and daughter, right, looks on during a ceremony held by the Ocala Chapter of the DAR at the Marion County Veterans Exhibit and Education Center on East Silver Springs Boulevard in Ocala, Fla. on Wednesday, Nov. 11, 2020. Reeves, who will turn 97 on Jan. 6, is a veteran who served in the U.S. Navy Waves, the women’s branch of the United States Naval Reserve during World War II. She was married to her husband, Leslie Edgar Reeves, for nearly 70 years. Her husband passed away in October of 2015. The couple met on a blind date when he was on survivors leave from the U.S. Navy in Sebring. Leslie Reeves was aboard the U.S.S. Hugh L. Scott, a troop transport ship, when it was sunk by a U-Boat during The Naval Battle of Casablanca in 1942. After his blind date with his future wife, Betty Reeves, he was sent back into action in the Pacific Theater aboard the U.S.S. Alabama where he served as a gunner. [Bruce Ackerman/Ocala Gazette] 2020. 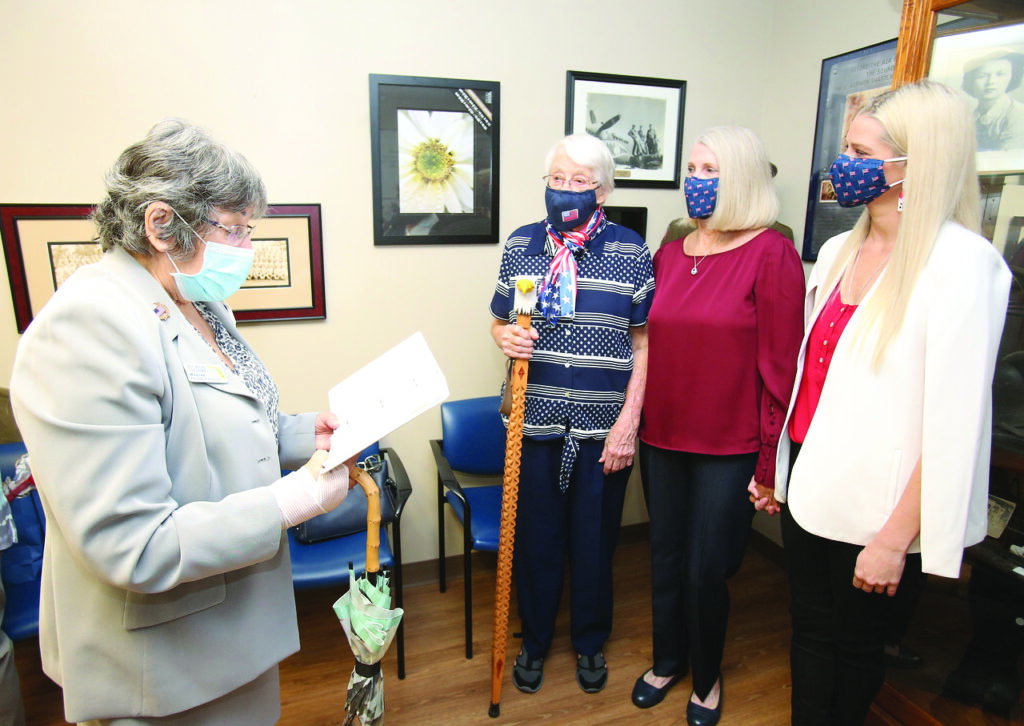 Reeves on Wednesday simultaneously became one of newest and one of the oldest members of the Ocala chapter of the Daughters of the American Revolution, or DAR.

Reeves was newly inducted into the organization along with her daughter, Marsha Reeves Scott. Joining the pair for the ceremony was Leslie Wengler, Reeves’s granddaughter, who also will become a DAR member in the near future.

Although junior in status within the group, Reeves is also one if its most senior members. That’s because she is also a 96-year-old World War II veteran.

Upon taking the oath, Reeves recalled that her aunt tried to get her interested in the DAR when she was 18, right after she graduated high school.

“I’m proud to be here. I should have done this years ago,” she said, but “my life got in the way.”

Part of that life included marrying and having three children with a young sweetheart who narrowly survived a German U-boat’s torpedo in World War II.

Before that, however, Reeves joined the U.S. Navy to do her part to defend our nation.

She said she felt it was her patriotic duty to serve her country. And, she added, “I wanted to help get the war over so he could come home and we could get married.” 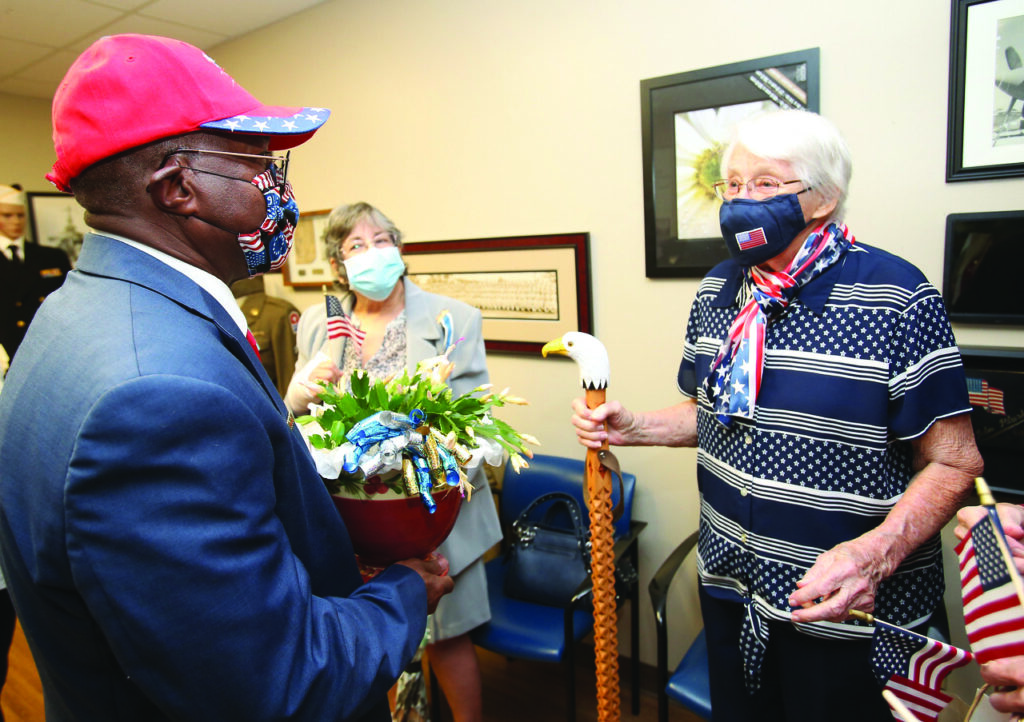 Betty Reeves receives a present from Jeffrey Askew, the director of Marion County Veterans Services, after she and her daughter, Marsha Scott, were sworn in as members of the National Daughters of the American Revolution. [Bruce Ackerman/Ocala Gazette] 2020

“He” was Leslie, her eventual husband, who in November 1942 was aboard the USS Hugh L. Scott, a troop transport ship that sank after being torpedoed off the coast of Casablanca while delivering U.S. forces during the invasion of North Africa. Fifty-nine of the ship’s sailors perished in the attack.

According to Reeves’s son-in-law, Circuit Judge Edward Scott, his future father-in-law was rescued and eventually sent back into combat aboard the battleship USS Alabama, spending the rest of the war manning an anti-aircraft gun while sailing the Pacific Ocean.

Betty Reeves’s two-year stint in the Navy was not as risky or dramatic.

After her initial training, she said, she was dispatched to Corpus Christi, Texas. There, Reeves served as a yeoman, working under the base’s gunnery officer. She said her duties included continually updating training manuals for aircraft and weaponry.

Reeves noted that military service was important to her family.

Her father was a World War I veteran who attributed his return home to the Spanish flu. Reeves recalled that her dad contracted the flu en route to Europe and was hospitalized for some time. He was set to be released for battlefield duty when the armistice was signed — 102 years ago on Wednesday.

It was another ancestor, David Alderman, whose service was responsible for her becoming a new member of the DAR.

Prospective members must prove a direct tie to a relative who fought in the American Revolution.

According to records verified by the national DAR leadership, Alderman, who is seven generations removed from Reeves, served in the militia in Duplin County, North Carolina, during the Revolutionary War.

Reeves’s journey to that began with her daughter. 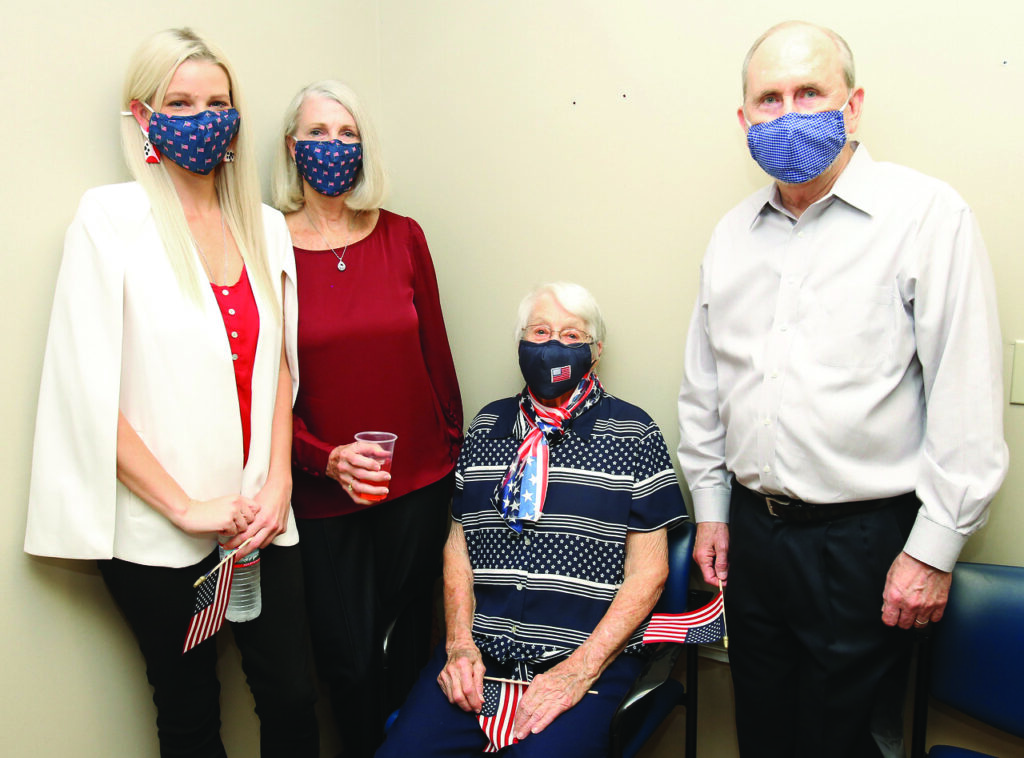 Betty Reeves, 96, seated, poses for a photo with her family, from left, Leslie Wengler, Marsha Scott and Judge Edward Scott, after she and her daughter, Marsha, were sworn in as members of the Daughters of the American Revolution during a ceremony at the Marion County Veterans Exhibit and Education Center on East Silver Springs Boulevard in Ocala on Wednesday. [Bruce Ackerman/Ocala Gazette] 2020

Marsha Scott said she became interested in joining the DAR after being in a Bible study group with Beth Coleman, the local DAR’s 1st vice regent. She said she was influenced by the fact that her mother’s aunt had been a DAR member in the 1950s, by her family’s long history of military service and by Coleman’s persistent lobbying.

“She’s a very proud veteran, and I thought it would be good for her,” Scott said of her mother.

“We’re absolutely thrilled to have her,” Coleman said after Reeves’s induction ceremony, which was held inside the World War II room of the Marion County Veterans Exhibit and Education Center.

Once the local Florida Highway Patrol station, and subsequently the headquarters of the county Veterans Services Department, the facility became a mini-museum last year.

“She embodies really what we’re all about. We are blessed and excited to have them,” Coleman continued, noting that adding Reeves, as well as her daughter and soon her granddaughter, promotes the DAR’s main principles: patriotism, history and education.

The Ocala DAR chapter turned 95 this year. It boasts about 140 members, according to Coleman. One of the organization’s first acts, in 1927, was to raise money to acquire the graveyard at Fort King.