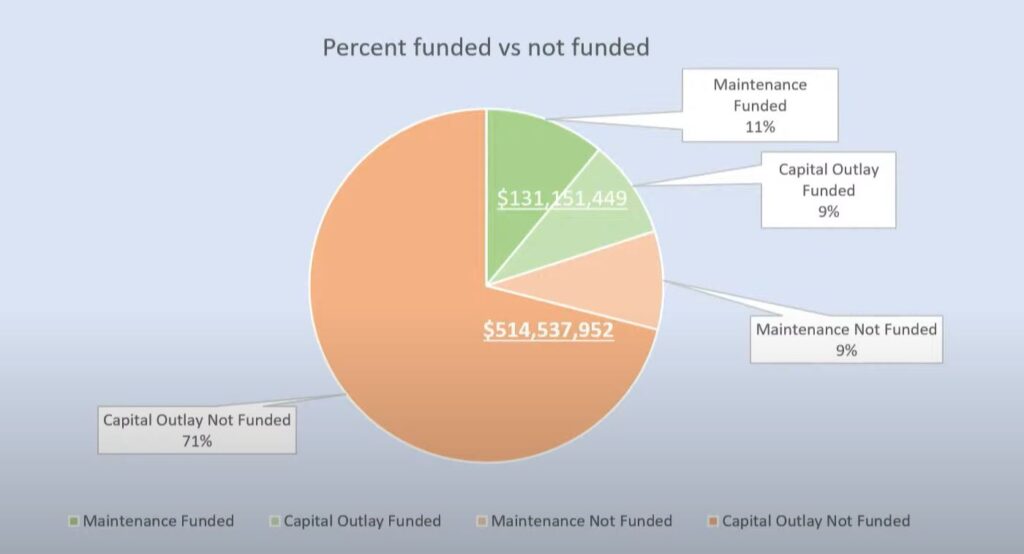 Marion County Public Schools has about $38 million worth of maintenance, repairs and renovations that are needed at school facilities this year, but they are more than $9 million short.

But the picture gets bleaker when the expected costs of all projects are extended over five years. The school system would have only 20% of the expected $654 million in needed and recommended projects.

The Marion County School Board reviewed the five-year facilities work program plan at a special workshop on Thursday.

Robert Knight, director of facilities for MCPS, said much of this year’s spending would cover air conditioning and roofing.

For the 2021-22 school year, maintenance, repairs and renovations that are fully funded total just over $28 million. The unfunded work totals just over $9.3 million.

The higher level of funding for this year is available because the school district had more than $30 million in rollover funds from previous years to use, Knight said.

Florida law and the Department of Education require school districts to complete a five-year work program budget every year.

Work program budgets are due by Oct. 1.

Despite the projected shortfalls, there is little the school board can do short of calling for higher taxes, an option not brought up on Thursday.

“Everything on this sheet could be justified and prioritized. When we circle back around though it’s what best for kids,” Thrower said of how best to spend the limited funds.

The estimated property tax revenue for schools is $36.7 million and is expected to grow about 2% each year over the next five years. But about $22 million of those tax dollars go to pay for the operational costs of running the schools, Knight said.

The total proposed work budget for the school year, including the capital costs for new construction, is more than $75.4 million, Only $43.3 million is funded, however.

School Board Chairwoman Nancy Thrower also felt there should be a higher priority placed on providing a covered space at every school without a gym. School Board Member Allison Campbell concurred with Thrower’s suggestions.

“There is so much, and I don’t envy your position because there’s obviously way more need than there is money. We have to be open to possibilities and do our best to prioritize,” Thrower said.

Future unfunded projects include the replacement school for Lake Weir Middle and a new classroom building for Ocala Springs Elementary.

The new middle school, with construction projected to start in 2023-24, is estimated to cost just over $61 million.

The new building at Ocala Springs, with eight new classrooms, is estimated to cost just $2.8 million.

Other projects, from major renovations of entire schools to covered dining and physical education areas, are set for future years.