Schools face ‘significant challenges’ as board votes to re-open 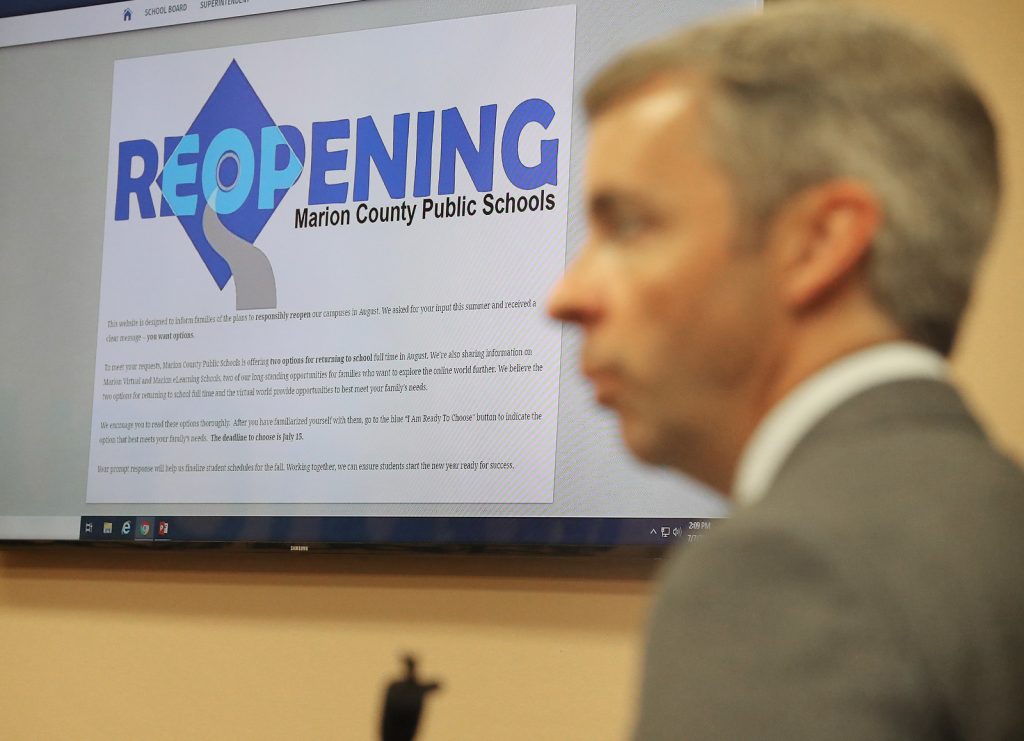 The Marion County School Board voted unanimously Tuesday to re-open all county schools on Aug. 10, approving a 73-page plan that gives parents a choice between enrolling their children in regular in-person classes or online instruction.

Parents have until July 15 to make a choice between in-person or online education for their children. After that, a student will be automatically be enrolled in their regular school.

The board based its decision on the recommendations of the 130-person Re-Opening Schools Task Force’s report that delved into four aspects of returning some semblance of normality to public education: instructional delivery, health and safety, scheduling and, in case the pandemic worsens, a second interruption.

“We have to get back to normalcy as soon as possible,’ said Mark Vianello, district deputy superintendent, who headed the task force.

In addition to facing an emergency order from state Education Commissioner Richard Corcoran to resume schools in August, Vianello said children need to be back in the classroom to restore the “emotional and social foundation” that all children need. This, despite the reality that COVID -19 cases are spiking in Florida, including Marion County, which saw it number of cases pass 1,000 this week.

While the re-opening plan calls for students and teachers to wear masks and face shields, as well as regular sanitizing and social distancing as much as possible, School Board members and administrators conceded they face “significant challenges.” Their own report includes provisions for “a second interruption,” the possibility that schools may have to be closed again if the number of coronavirus cases continue to surge.

Despite the obvious risks of resuming school – something school officials repeatedly acknowledged — a survey of 21,945 Marion County parents showed that 49 percent of them want their children back in school in August. Another 22 percent would rather wait until after Labor Day, while 16 percent favored waiting until January. About 13 percent said they did not want their children returning to school for face-to-face learning for the 2020-21 school year.

Under the plan, each child and teacher will be provided a plastic face mask. The school routine will include school five days a week, normal arrival and dismissal times, changing classes, breakfast and lunch and extracurricular activities. Those students taking online classes will also be expected to adhere to a regular school day routine, with regular classes limited in time, class changes, a lunch break and after-school activities.

Arrival times are likely to be staggered to avoid large gatherings of students before school. There will not, however, be special distancing on buses, although masks will be required.

Corcoran’s order calls on schools to open and offer “the full panoply of services” to students. He said opening is necessary to keep children from continuing to lose ground academically. That slide began when schools closed in March and school districts moved to online learning. According to Marion officials, half of local students showed a learning decline in a least one subject during the last nine-week period of the past school year.

A couple rules that will affect parents:

Visitors to school must have an appointment, wear a mask and social distance.

Outside food is prohibited.

If a student has a temperature of 100.4 degrees or higher, they will not be allowed back on campus for at least 72 hours, or three days.

Nine members of the public spoke at the meeting. Teachers were particularly vocal.

“We deserve and have earned respect, to be valued for our contribution, to be considered when this decision is made as we are the vulnerable ones – being asked again to give and do more than any other group. To risk our very lives.”

Vickie Treulieb, a Forest High teacher and a parent, echoed her remarks: “I’m supposed to go back to class with these local youth and risk my life to teach them? Let the weight of that set in. Teachers and staff will be risking their lives.”

Dr. Axel Martinez, an Ocala geriatrician, told board members the community is not ready to re-open schools because of the soaring number of virus cases and that employees would “take the biggest hit.” As for students, he said they would be spreaders who would take the virus home.

School Board member Beth McCall, noting that she also serves as executive director of the Marion County Children’s Alliance, said while the inherent risks of re-opening schools are obvious, too many children are at risk staying at home. She noted that child abuse reports are way down, largely because school officials are often the ones who call authorities to report abuse cases.

“We have children we have not had eyes on in months,” McCall lamented.

New Superintendent of Schools Diane Gullett, attending her first School Board meeting, assured board members and the community that the district would be flexible and ready to pivot when and if it needs to.

Board Chairman Eric Cummings likened the current school district response to preparing for a hurricane, calling the pandemic Hurricane Corona.