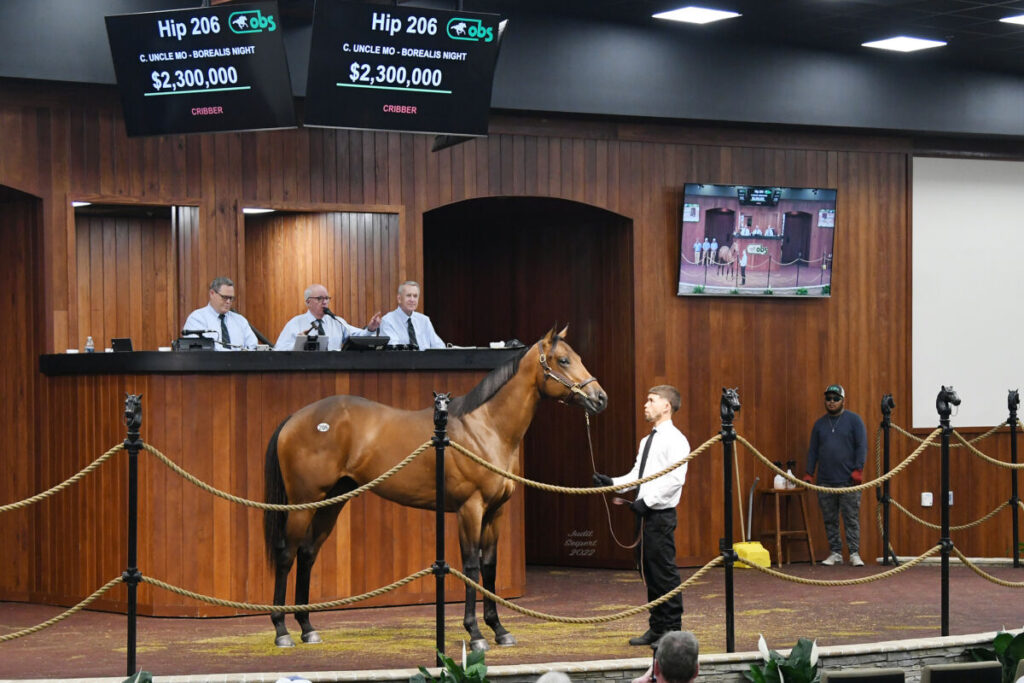 The sale-topping colt by Uncle Mo consigned by Top Line Sales and purchased by Gary Young, agent for Zedan Racing Stables, for $2.3 million at the OBS Spring Sale. [Judit Seipert]

The Ocala Breeders’ Sales Company’s Spring Sale of 2-Year-Olds in Training is the largest offering of juveniles in the Thoroughbred industry each sale season. With a catalog of more than 1,200 horses, this year’s renewal April 19-22, attracted an international buying bench and fueled by fierce demand at the top-end, established new sale records over the auction’s four days of trade.

Topping the sale was Hip 206, a Kentucky-bred colt by Uncle Mo consigned by Top Line Sales, agent, who sold for $2.3 million to Gary Young, agent for Zedan Racing Stables in the sale’s opening session on April 19. The bay colt, who breezed a fast furlong (an eighth mile) in :09 4/5 at the under tack preview, is produced from the Astrology mare Borealis Night, a half-sister to graded stakes-placed runners Kinsley Kisses and Spooky Woods. Bob Baffert will train the horse in Southern California.

Bred by Corser Thoroughbreds, the colt was purchased as a yearling last year by Scott and Evan Dilworth for $250,000 out of the Terrazas Thoroughbreds consignment at the Keeneland September Sale. Scott spoke with the media at OBS following the fall of the hammer and described what appealed to him about the colt last year.

“He walked out of the stall, and I went, ‘Wow,’ and that was that,” Scott said. “It’s funny when we went and looked at him a ton of times—you know when you like one, you go back and look at them a few times—and I remember (Eduardo) Terrazas said, ‘How come you are always smiling so big whenever you come see this horse?’ I said, ‘He just makes me smile.’”

Jimbo Gladwell, who consigned the colt along with his wife, Torie, on behalf of the Dilworths, said of the colt, “He is a superstar in the making; I have to give all the credit to Scott. He twisted my arm to buy him. All we did was get him ready. He’s easy (to work with) and is a smart colt.”

All told, five horses sold for seven figures. The second-highest-priced horse of the sale was Hip 401, a Medaglia d’Oro colt that sold to California-based Red Baron’s Barn/Rancho Temescal for $1,750,000. Consigned by de Meric Sales, agent, the colt is out of the unraced Ghostzapper mare Eltimaas and is a half-brother to multiple Grade 1 winner Drefong.

Hip 885, a gray or roan Tapit colt consigned by Eddie Woods, agent, brought $1,700,000 from Lane’s End Racing and West Point Thoroughbreds. Produced from the winning Seeking the Gold mare Pension, the colt is a full brother to graded stakes winner Thoughtfully and a half-brother to two other stakes winners in Annual Report and Giant Payday.

Hip 1174, a filly by Munnings, sold to Larry Best’s OXO Equine for $1,600,000 in the sale’s final session on April 22. Consigned by Eddie Woods, agent, the filly’s dam is multiple stakes winner Tensas Harbor, by Private Vow. Rounding out the seven-figure horses was Hip 490, a Mendelssohn colt consigned by Scanlon Training and Sales, agent, that sold to Japanese trainer Mitsu Nakauchida for $1,300,000. Bred in Kentucky by Marcus Stables, the colt is out of the Malibu Moon mare Grace Is Gone. David Scanlon acquired the colt out of last year’s Fasig-Tipton Midlantic Eastern Fall Yearling Sale for $235,000.

“He was a bit immature when we brought him in,” Scanlon related. “We took our time with him, and he started developing for us. He did everything right; he’s just a dream. The colt is the entire package. 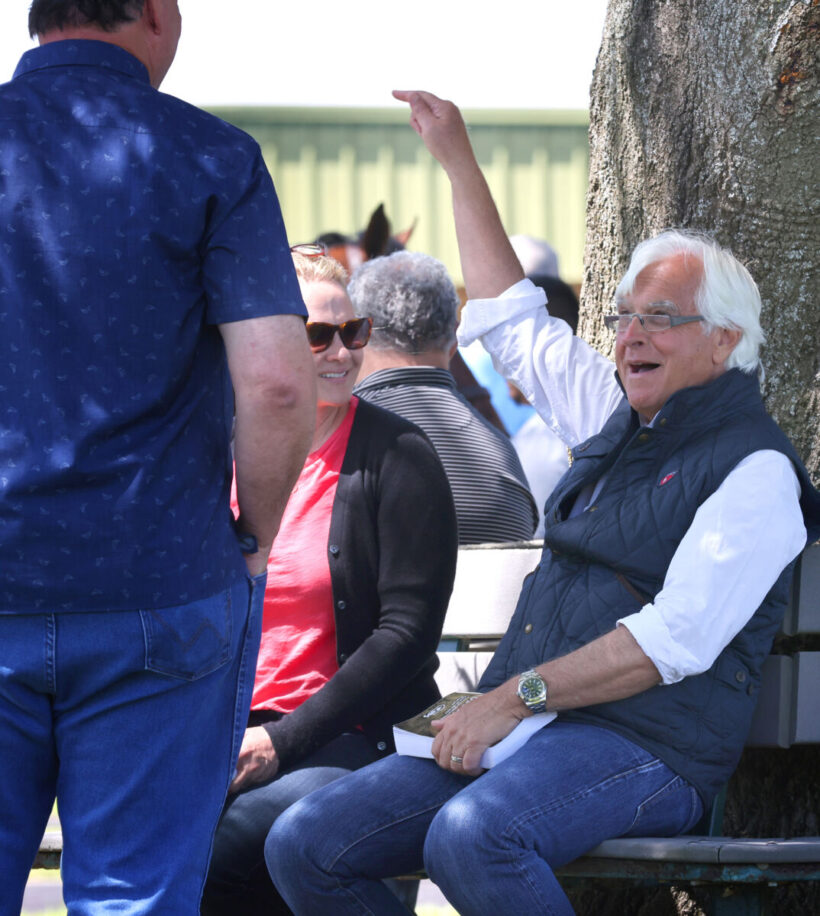 Hall of Fame Horse Trainer Bob Baffert talks to people with his wife, Jill, by his side on the first day of the OBS Spring Sale of Two-Year-Olds In Training at the Ocala Breeders‘ Sales Company in Ocala on April 19. [Bruce Ackerman/Ocala Gazette] 2022.

“I have to credit my partners on the horse, Gabriel ‘Spider’ Duignan and Bruno DeBerdt,” Scanlon added. “I called them when I found the horse (as a yearling), and they supported me. We took a chance. It was a lot for us to spend on him, but he had a beautiful frame and a great walk. He has a beautiful demeanor about him, and I love the sire. I think Mendelssohn is going to be a hit.”

The top-selling Florida-bred colt of the sale was Hip 899, a son of Bolt d’Oro who fetched $675,000 from Karl and Cathi Glassman. Consigned by de Meric Sales, agent, the Sunshine State product was bred by France and Irwin Weiner, and Tristan and Valerie de Meric, and will be raced in partnership with Leon Ellman and Laurie Plesa; Eddie Plesa Jr. will train the horse in South Florida.

The colt breezed an eighth mile in :10 at the under tack preview, and he is out of the unraced Tiz Wonderful mare Polyester, making him a half-brother to graded stakes winner Harpers First Ride.

“He is put together,” said Karl. “The de Merics do a great job of conditioning, and we’ve done business with them before. They stand behind their product and treat everything really well. They have a good program, and that’s important to us.”

Among additional noteworthy storylines was the sale of Hip 66, a Curlin colt that sold for $510,000 to David Ingordo, agent for Mayberry Farm. The colt was pinhooked (bought as a yearling with the intent of selling as a 2-year-old) by First Finds for just $40,000 at last year’s Keeneland September Sale.

“I saw him in the back ring at Keeneland and I liked the horse right away,” said Tami Bobo, who operates First Finds with her husband, Fernando De Jesus. “I thought he had an amazing walk. I asked the consignor what they needed for the horse, what they were thinking, and I stood there and bought him. He’s been a great horse all year for us. He had an amazing winter. The de Merics have been very proud of him, and they enjoyed having him. It’s a blessing to be able to buy him at that price and then turn around and send him here to be a solid 2-year-old.”

For Raffaele Centofanti of Centofanti Thoroughbreds, the sale of Hip 306 to Red Baron’s Barn/Rancho Temescal for $525,000 helped the horseman realize a goal that he has aimed for since starting his public operation two years ago. The Union Rags filly, who breezed a fast eighth-mile in :09 4/5, is produced from the graded stakes-placed Aldebaran mare Corderosa and is a half-sister to stakes-placed runners Orecchiette and Lane Way.

“My goal when I started consigning was to sell a horse for $300,000,” said Centofanti who along with his father and mother operates a private training center in nearby Citra, Fla. “This is the most expensive horse I have sold. It feels awesome.”

Next up for OBS is the June Sale of 2-Year-Olds and Horses of Racing Age, slated for June 7-9. The sale’s under tack show is scheduled for May 31-June 4.