The trees bend down along the stream,

Where anchored swings my tiny boat.

The day is one to drowse and dream

When music from his bosom bleeds

Among the river’s rustling reeds.

No ripple stirs the placid pool,

When my adventurous line is cast,

A truce to sport, while clear and cool,

The mirrored clouds slide softly past.

The sky gives back a blue divine,

And all the world’s wide wealth is mine.

A pickerel leaps, a bow of light,

The minnows shine from side to side.

The first faint breeze comes up the tide—

I pause with half uplifted oar,

While night drifts down to claim the shore. 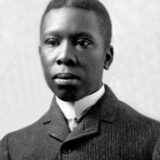 Paul Laurence Dunbar, born in 1872 and the author of numerous collections of poetry and prose, was one of the first Black poets to gain national recognition. In 1893, Dunbar self-published a collection called “Oak and Ivy.” Two years later, his poems began appearing in major national newspapers and magazines, such as “The New York Times.” Dunbar’s steadily deteriorating health caused him to return to his mother’s home in Dayton, Ohio, where he died on February 9, 1906, at the age of 33.