Findings from investigative report are headed to the governor 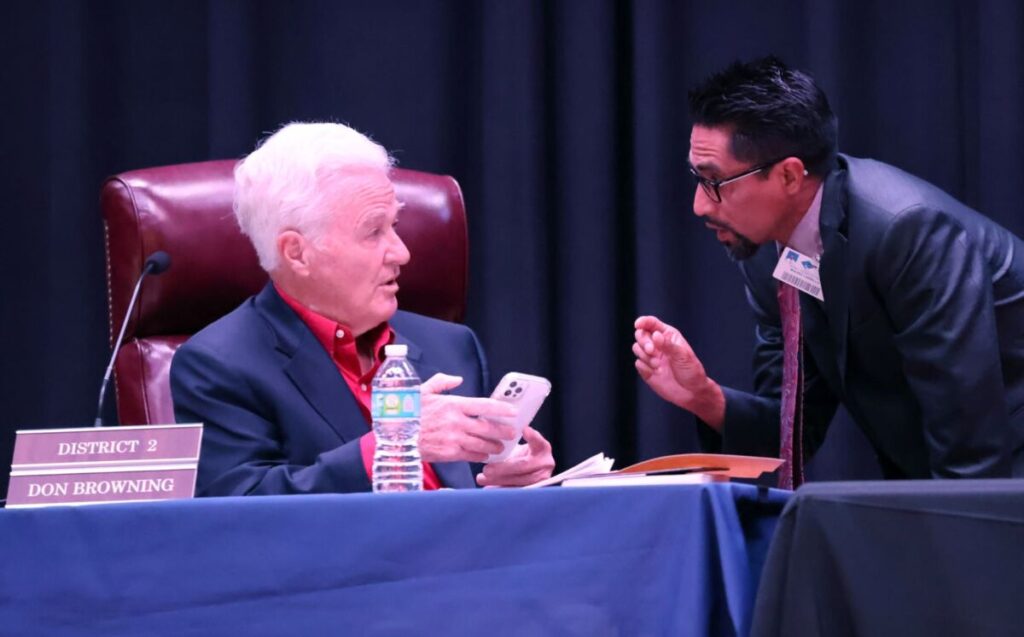 After an investigation into complaints filed against a Marion County School Board member was completed by an independent source, the board unanimously decided on Tuesday that the findings should be sent to the office of the governor for further review.

The investigation lasted for several months and was conducted in response to a Title VII complaint accusing Board member Don Browning of causing hostility in the workplace. Browning was found to have not contributed to a ‘hostile work environment,” but his words and actions were found to have amounted to ‘bullying and harassment’ as defined by the school board’s policy.

The complaint that began the investigation was filed by an anonymous school board employee in January of 2022. The board opted to have an outside neutral party to conduct the investigation and sum up the findings, which was done by Stephanie Marchman, attorney at law for Gray-Robinson, P.A.

“It was reported by various witnesses in this case that they have never been treated in the manner Member Browning has treated them,” said Marchman in the final investigative report. “These dedicated public servants deserve better.”

The report assessed allegations made by the complainant in comparison to the factual findings discovered during the investigation, which include a variety of sexist and racist remarks that witnesses claimed under oath that Browning had made.

“It is substantiated that Member Browning’s behavior has caused the complainant to become distressed and upset while at work, so much so that [redacted] has requested to no longer work with him,” according to the report.

Other notable factual findings include but are not limited to the determination that Browning would ask school board employees for additional favors, needlessly extend the duration of board meetings, publicly embarrass other board members and ignore and invalidate both Black and female employees, according to the report.

Another statement a witness claimed during an interview was that “Member Browning looked up and down a female school board member, telling her ‘That is a great dress, and I’ve seen a lot of great dresses,’” according to the report.

The school board did not have any authority to enact disciplinary action against the member in question and could only offer statements and send any allegations of malfeasance, impropriety or misfeasance to the office of the governor for further review and determination, according to Board attorney Jeremy Powers.

“This has very serious implications to my ability to perform my duties as assigned by the governor and as I swore to uphold,” Browning said. “I’m very happy to include the governor in this entire scenario, and let’s move forward and follow our policy of treating individual board members with the highest level of professionalism and respect.”

Eighteen individuals were interviewed throughout the course of the investigation, including Browning himself, and a variety of written documentation was received and reviewed. Browning said that he felt that the claims were unprecedented, and since he was found to not have created a hostile work environment, the investigation caused harm to his reputation and made him the victim of harassment.

“One of my primary concerns was how people considering running for office would say ‘I’m not going into that venue,’” Browning said. “I would request the governor wholeheartedly to make a thorough investigation of the parties involved in the context of what I consider to be gross harassment.”

Browning said that he has already filed a human resources complaint against the school board itself and would possibly be taking further action.

The other members of the school board were able to offer comments and participate in discussion both about the findings of the investigation and their opinions on what action should be taken. Board Member Kelly King used a portion of her comments as an opportunity to speak directly to Browning and express her disapproval of his actions and of his response to the complaints.

“I have looked at this as a distraction from the education of our Marion County public students,” King said. “I think you trying to put a complaint against this board is fine if that’s what you need to do. But that is to deflect your actions and your complaints and to deflect what you have done—because you, sir, have a bruised ego. You are the one that has harassed our employees.”

School Board chair Rev. Eric Cummings emphasized clarity in the fact that the board could not have investigated the matter internally. He said that since the complaint was against an elected or appointed official rather than between two employees, the board opted to have a neutral third party investigate any possible wrongdoing in accordance with board policy. The only decision on the table for discussion was whether to pass on the findings to a higher authority, he said.

“It was in the authority of this district to handle this situation with all due diligence and professionalism and to make sure that this investigation went forward in such a way that it would not be tilted in either direction,” Cummings said. “Yes the ‘hostile work environment’ was unsubstantiated, but there’s a ‘but’ here. Member Browning’s conduct amounts to bullying and harassment as defined by school board Bullying and Harassment Policy 2.15.”

Cummings emphasized that the matter would have been investigated with equal thoroughness if it had been any other member of the school board and said that the board would have dealt with any Title VII complaint with a similar amount of seriousness and severity.

“As a board we have to support our staff. We support our staff by following the process of what should happen. Because it’s a board member, it should be processed all the way through and let due process handle it. Let the governor make a determination on whatever he wants to do or not do—it’s out of our hands,” said Cummings.

Board Member Nancy Thrower said that her hope, now that the investigation is over, is that the school board may return to its normal operations and focus on the responsibilities they have as public officials.

“In emotionally charged situations I try to shift my mind more toward the facts as much as I can, which I’ll admit is difficult,” Thrower said. “I’m really passionate about my role as a school board member, and I’ve been steadfast in saying that each of us is individually responsible for our words and our deeds—and I stand by that.”

Thrower recommended that the board institute a policy that the findings from any investigation based on complaints against members of the board be automatically reported to the governor, rather than giving the school board an option.

“In this situation, the governor has the power, and it is what it is,” Thrower said. “I’ll finish by saying I found this whole thing extremely distasteful.”