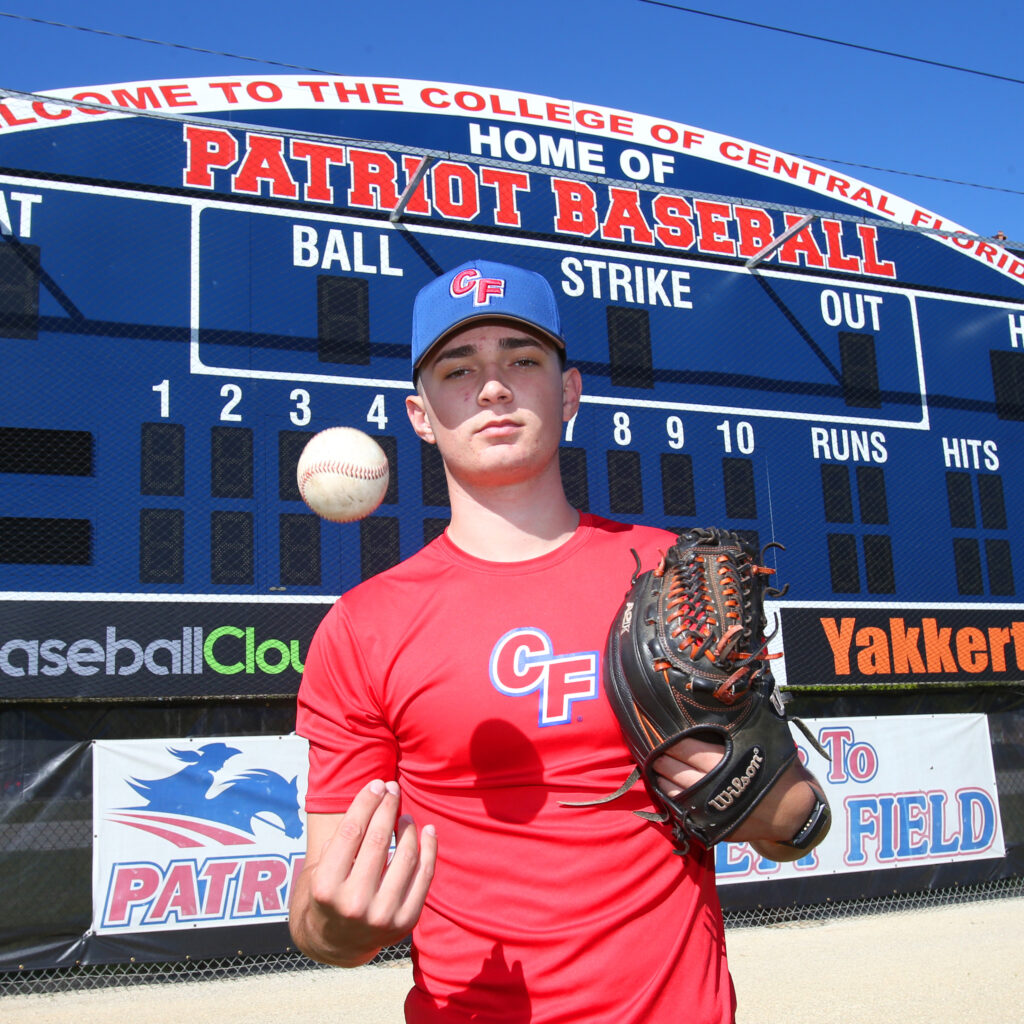 Shawn Guilliams, 18, poses for a photo at Goodlett Field at the College of Central Florida in Ocala, Fla. on Tuesday, Feb. 23, 2021. The Central Florida pitcher throws a 96 mph fastball. [Bruce Ackerman/Ocala Gazette] 2021.

On a recent brisk afternoon at Goodlett Field on the campus of the College of Central Florida, 39 baseball scouts armed with stopwatches and radar guns huddled together in the bleachers just behind home plate, ignoring any social distancing recommendations.

The threat of coronavirus was nothing compared to getting a clear look at Shawn Guilliams, a freshman, 6-foot-1 righthander for the CF Patriots baseball team.

While the conglomeration of scouts was an unusual sight at the Ocala campus, Guilliams is used to the attention.

He’s the guy who, at the age of four, wasn’t allowed to play T-ball with kids his age because coaches were afraid his arm would hurt the other kids. He’s the guy whose arm longtime Central Florida coach Marty Smith described as “electric.”

The Belleview native’s baseball potential has been debated since he could walk.

“When he was about 18 months, we had a plastic ball and bat, he actually bruised my forehead with a ball when he hit a line drive back to me,” said Brian Guilliams, Shawn’s father.

While his arm has scouts salivating, Shawn didn’t start pitching regularly until he was a junior at The Villages Charter High School. He started playing shortstop and catcher, but his arm strength was obvious, even if it wasn’t always under control.

“At a young age, we didn’t know where it was always going,” Brian Guilliams said. “It was kind of all over the place, but he’s always had a pretty special arm ever since he was a little kid.”

His arm might have screamed pitcher, but his athleticism and stature guided him to shortstop instead, where the then-5-foot-2, 115-pound freshman became a starter on the The Villages’ varsity baseball team.

But things changed in his junior year. He shot up to six feet and he started learning the finer points of pitching.

“I had a pretty decent breaking ball, so I was like, why not just try to stick to it and see what I could do with it?” Shawn said. “I had the support of my family, and they thought I would be a pitcher from the time I was teeny tiny.”

With a solid curveball and a fastball in the high 80s to low 90s, it didn’t take long for scouts to take notice. Within a couple weeks of him touching 88 mph for the first time with his fastball, Shawn started to receive offers from Division I colleges.

But he had his eyes on the MLB Draft. After his senior year at The Villages ended prematurely due to the outbreak of COVID-19, he hoped for a selection in the draft. But the pandemic also affected those plans.

Normally, the MLB Draft takes place in June and lasts 40 rounds. However, the league shortened the draft to just five rounds in 2020. Shawn went undrafted and he signed with the University of North Florida.

After his focus turned to pitching, he started working on developing his strength and velocity. While he shot up vertically, he carried a slender frame.

So, he joined Cressey Sports Performance in Jupiter. There, he started a workout program and said he got his fastball to 93 mph.

But his emphasis on gaining weight and developing velocity were not what UNF wanted. There wouldn’t be any weightlifting, and the program focused on running and command. Shawn started losing weight.

Unhappy with North Florida’s development program, Shawn decided to look elsewhere before he ever played a game.

“Initially, we weren’t a fan,” Brian Guilliams said of his son’s decision to leave UNF.

“We wanted him to honor his commitment,” he said. “I think at that point we just realized we had to step back and support him, that this is the journey that he’s going on.”

Despite the support of his family, MLB Draft eligibility and NCAA transfer rules made his next step more complicated.

Shawn had to stay at UNF for three years before he could be drafted again. Transferring to another Division I school meant sitting out a year before he could play again.

That’s when he sent a direct message to Zac Cole, the College of Central Florida’s pitching coach.

“Hey, I’m interested. I’m leaving UNF,” he messaged Cole. “Do you got anything for me?”

Central Florida and beyond

It didn’t take long for Central Florida to welcome Shawn into the fold.

“I want to say the next day, I came here, got the offer, signed the paperwork, and it was a done deal,” Shawn said.

Central Florida was exactly what Shawn was looking for in a program. For one, it’s a lot easier for him to gain weight now.

“I’m living at home, eating Mom’s home cooking,” Shawn said. “I left UNF, I was 171 pounds because of all the running. I was losing weight. As soon as I got back, I gained 10 pounds like it was nothing. So, it just feels good to be back at home around my family.” 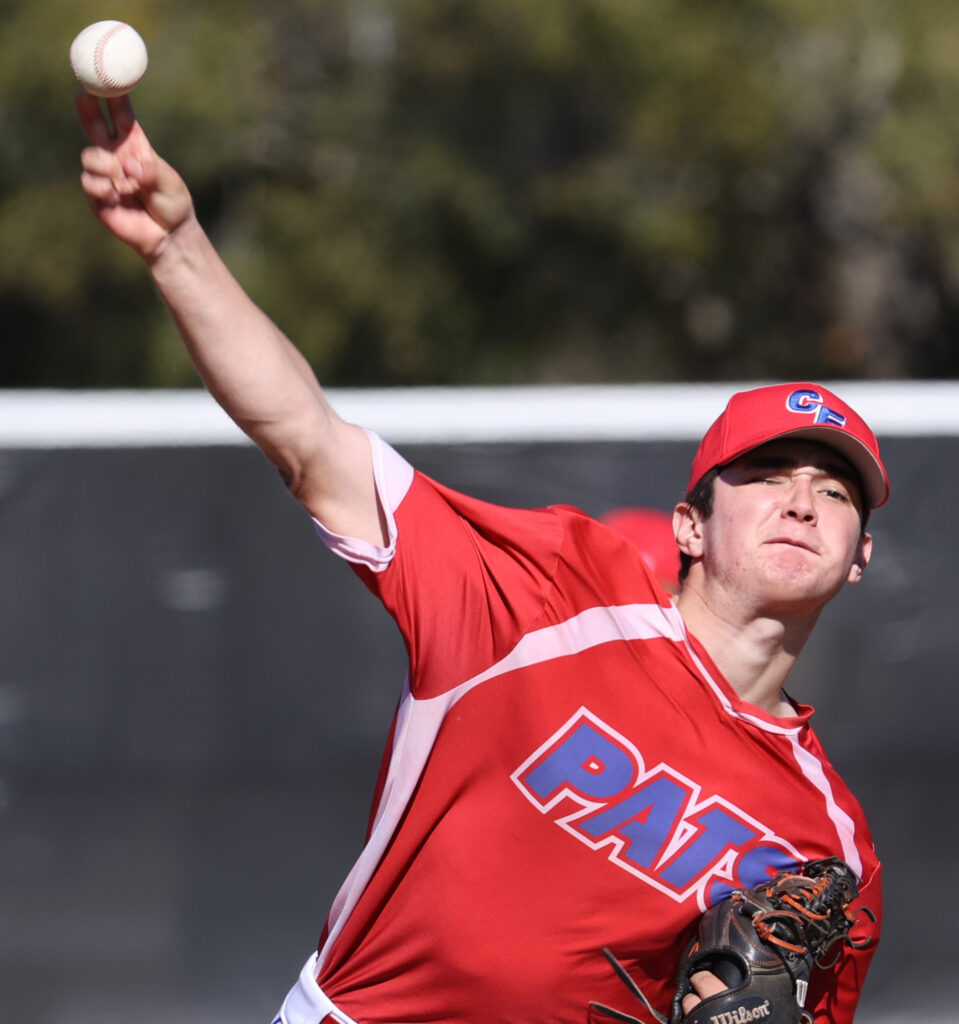 Marty Smith is supportive of his players gaining weight. It’s not uncommon to see Uber Eats or Jimmy John’s make deliveries to the Central Florida dugout.

“Basically, there’s a saying out there, ‘mass equals gas,’ meaning the heavier and stronger you are, the harder you throw, to a certain extent,” Smith said. “If you’re 170, 175 pounds, and your frame says you can put on 20-25 pounds, we’re going to try to do that here in two years by eating, by lifting, by doing everything that we can.”

On the Patriots’ roster, Shawn now stands at 6-foot-1 and 185 pounds. He’s seen a noticeable uptick in his velocity as well. He topped out at 96 mph, a personal best, on Feb. 3 against State College of Florida, Manatee-Sarasota. Shawn credits the coaching staff for his improvement.

“When I came to Zac, he pretty much was drooling at the thought of being able to work with me,” Shawn said. “I love the atmosphere here and I think the development is crazy.”

So far, Shawn has been dominant for Central Florida.

“And then Sully calls my high school coach, he calls my travel ball coach and he called my 14U coach and said ‘Get him in the transfer portal,’” Shawn said. “I want to say I was in for about 15 minutes and I had talked to Clemson, Kentucky, Notre Dame and then Florida called the next day. They called, ran me down the offer and, I mean, it’s a deal that was too good to be true, had to take it.”

Currently, Shawn is committed to transfer to Florida, but the draft could alter those plans. There’s a chance he could be drafted high enough to skip school entirely.

“It’s going to be tough to get to the University of Florida with the draft because he’s moving up big time,” Smith said.

Shawn reminds Smith and Cole of Los Angeles Dodgers ace Walker Buehler, the 6-foot-2, 185-pound righty has a hard curveball and a fastball in the mid-90s.

And as a late bloomer, pitching wise, there’s a chance his arm strength and velocity could increase.

“There’s just a lot of variables,” Cole said. “I think you’re still pretty early in the process. And for a guy like Shawn, you know, I think who he is right now … is not the same guy he’s going to be at the end of May, if we’re fortunate to be in the postseason.”

It’s not the first time that Central Florida has had a highly touted prospect in its program recently. Nate Pearson was selected with the 28th overall pick in the 2017 draft by the Toronto Blue Jays after a stint with the Patriots. Shawn has the opportunity to be the next Central Florida product to sign a professional contract.

“Can he touch a 98 (mph pitch) this year? Probably,” Smith said. “Would that necessarily be a good thing for him? I don’t know. But he’s going to train and he’s going to try to because that’s what the game is today. I think it might take some time for his body and his arm to mature into that.”

But for now, he’s the local guy playing for the junior college in his backyard. All the concerns about size, college and the looming draft are tomorrow’s problems. Today is just about playing baseball.