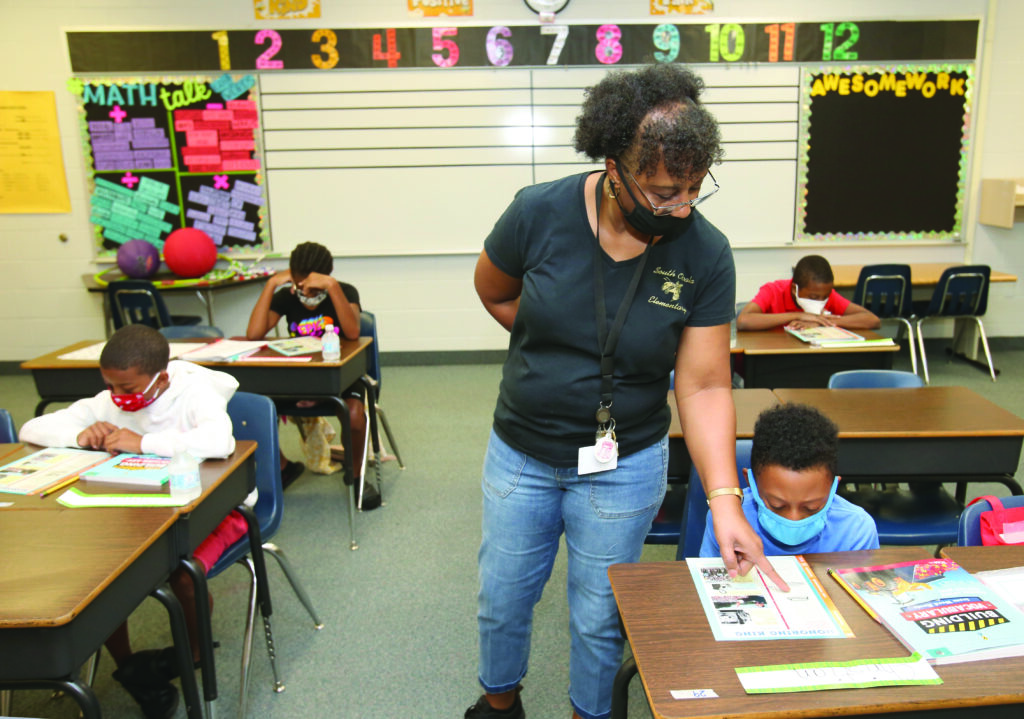 Carolyn King, a teacher, works with fourth and fifth grade students in her classroom where social distancing was being observed during the last week of a three-week summer enrichment program for students at South Ocala Elementary School in Ocala, Fla. on Wednesday, July 29, 2020. Classes are scheduled to begin on August 24 for students in the Marion County Public School System amid the COVID-19 pandemic. [Bruce Ackerman/Ocala Gazette] 2020.

Under the new contract, the pay for beginning teachers in Marion County is being hiked 14.6 percent to $44,750 a year, while veteran teachers will receive a 2.3 percent raise.

The School Board decision came on Nov. 11 at an impasse hearing that had been called after the school district and the Marion Education Association, the teachers’ union, could not reach a compromise through normal negotiations.

The road to last week’s decision is a long and complicated one.

Last spring, the Florida Legislature approved spending $600 million so Florida’s 67 school district could raise every teacher’s salary, including starting ones, to $47,500. Problem is, the $600 million was not enough, so school districts were instructed to get as close to $47,500 as possible. In Marion County’s case, that was $44,750.

The state also mandated that school districts give veteran teachers a 2 percent raise.

The union initially asked for a 4 percent raise for veteran teachers. The reason was two-fold, Altobello said – to give veteran teachers more money and separation from beginning teachers and because there is no performance pay for teachers this year. The School Board countered with an offer of 2.1 percent. The union came down to 3 percent and the district inched up to 2.3 percent. Negotiations reached a deadlock, and an impasse was declared.

Altobello said whatever savings the district secured in the deal will likely be costly to our schools in the long run.

“They were not willing to budge, and it’s going to cost us veteran teachers,” he said, adding “we know what they’ve been going through.”

Moreover, Altobello said the board’s decision “doesn’t move us anywhere around where we need to be to compete” when recruiting teachers. He said several neighboring counties pay much higher starting salaries, including Citrus ($46,000), Hernando ($46,150) and Sumter ($47,500).

“At the end of the day we were asking for a $2 million commitment from the district and they were willing to give $1.3 (million),” Altobello said.

“I asked the board one question: How are you selling Marion County when recruiting. That is the big question. I don’t see this offer moving the needle much. We’ve got work to do.”

The raises are retroactive to July 1, according to the agreement, but Altobello said the Florida Department of Education has yet to release the funds to Marion County, so no one knows exactly when the raises will show up in paychecks.