Not a token reading program 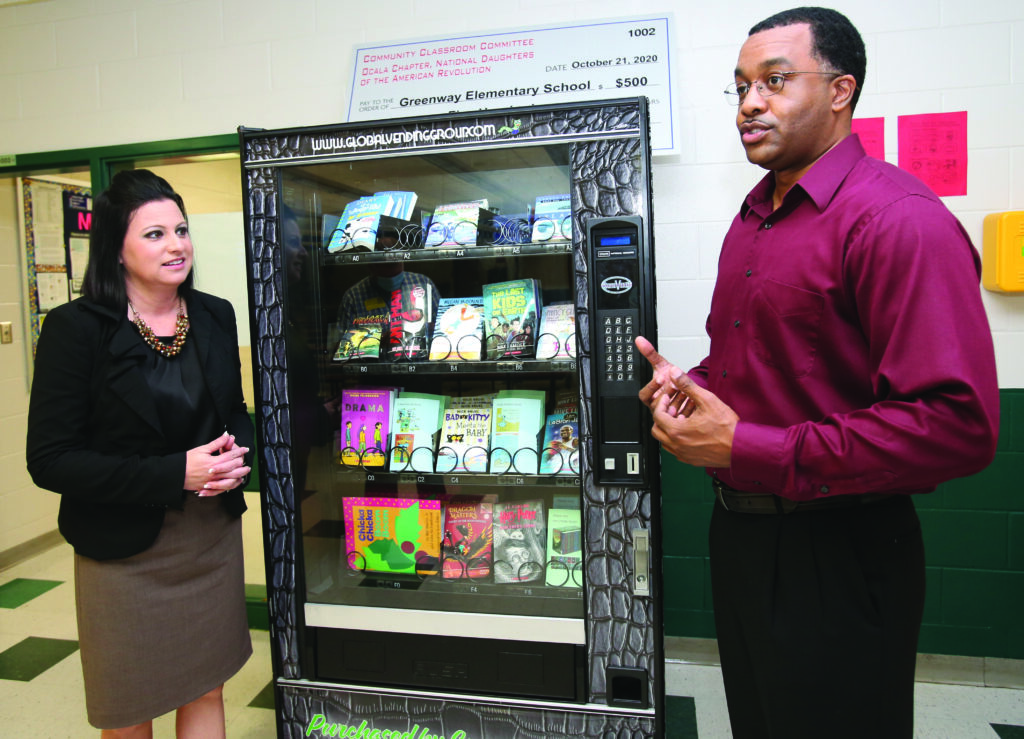 Tucked inside the cafeteria at Greenway Elementary School is arguably the most unique vending machine in Marion County.

Instead of cookies or chips, sodas or juice, sandwiches or even lottery tickets, this particular inanimate token-swallower dishes up something that its sponsors believe is far healthier for users—for both their minds and bodies.

Through an innovative technique, Greenway Elementary Principal Jamie North and Greg Wilson, the school’s librarian, are promoting literacy with a vending machine.

Through the “Book ATM,” as the machine’s side panel says, the educators say they have a few goals.

They want to boost their students’ reading proficiency on state standardized tests. They want to provide books to underprivileged families for whom reading materials can be a luxury. And they want a more literate student body by instilling a lifelong love of books.

“If this doesn’t keep them interested, we’ve kind of lost our purpose,” North said.

The principal said she got the vending machine idea from a school in South Florida, whose experience with one had been posted on social media.

Work on the project began about a year ago, North said. And there was a stumbling block.

Global Vending Group, the New York company that makes the machine, was not approved as a vendor for Marion County Public Schools.

After slicing through considerable red tape, the next challenge was finding $4,000 to buy the vending machine—a price, said North, that included the machine itself, its delivery, the decorative alligator-skin wrapping that commemorates the school’s mascot and the tokens.

The school, North said, subsequently dipped into the profits of its previous book fairs, which are popular events with students, parents and faculty.

The machine advertises paperback materials to all grades at the Silver Springs Shores school, from offerings like “Chicka Chicka Boom Boom” for younger pupils to the series of “Diary of a Wimpy Kid” for older ones.

Wilson said the cafeteria was chosen as the machine’s home because it is a high-traffic, centralized location all students visit.

“They’re seeing it every day,” he said, “and it’s kind of fun to see their eyes turn into saucers” when new books are stocked each week.

To obtain its wares, students must feed the machine three tokens, which they earn by meeting reading goals set by their classroom teachers. North said they are best positioned to evaluate how each child is progressing, considering that reading proficiency is not evenly distributed. 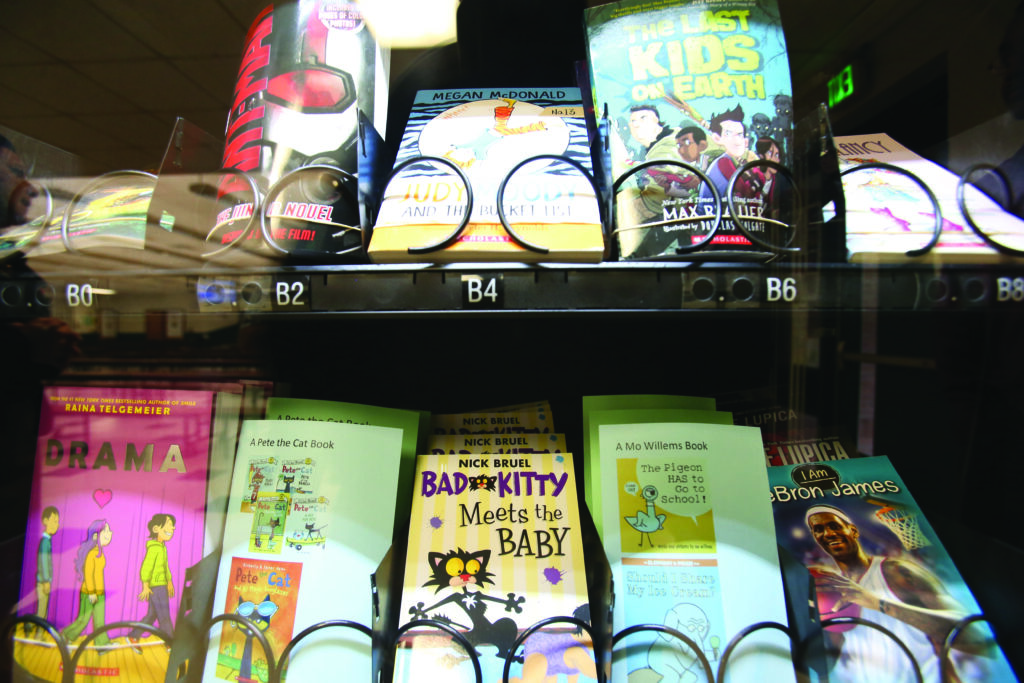 Books are shown in the Greenway Book ATM where students can buy books in exchange for reading tokens at Greenway Elementary School in Silver Springs Shores, Fla. on Wednesday, Nov. 11, 2020. The Global Vending Group book vending machine was the brainchild of Principal Jamie North, who noticed a similar machine that was installed at another school not in Ocala/Marion County. Students need 300 points in their reading goals set by their teachers to get three tokens to get a free book from the machine. The Greenway Book ATM was partially funded by the Community Classroom Committee of the Ocala Chapter of the National Daughters of the American Revolution. Other funding has come from book fairs that the school holds. [Bruce Ackerman/Ocala Gazette] 2020.

To earn three tokens, each child must attain 300 points. Points vary by each reading task accomplished.

So far, said Wilson, 22 children have reached that goal and bought books.

“We emphasize hands-on reading,” Wilson said. “It’s definitely something we want to encourage.”

Wilson noted that the concept touches more than those who meet the goals.

“One thing our teachers are seeing is that they are starting to work harder,” he said.

The books themselves are purchased at discounted rates through publishers and retailers. North and Wilson both said it’s critical for children to have new books as they build home libraries.

“There’s something about having your own stuff,” North observed.

The group that recently helped restock the machine’s supply agrees with such thinking.

Last month the Ocala chapter of the Daughters of the American Revolution (DAR), gave North $500 to buy new books.

The DAR adopted the school because, unlike others, Greenway Elementary does not have a dedicated business partner, said Beth Coleman, the local DAR 1st vice regent. That came at the suggestion of former Superintendent Heidi Maier, Coleman said.

That idea hit home with Coleman because she is a retired teacher who spent 14 years teaching at Greenway Elementary.

“I love Greenway. It’s a great school. It’s a great neighborhood. That school really services families,” said Coleman. “They are our community school and we are proud to support students’ success.”

And in this case, she said, a literacy initiative also resonated because of her involvement with the DAR’s Community Classroom initiative, which promotes educational projects. Coleman is now the DAR’s statewide chairwoman of that effort.

The DAR raised the funding for Greenway Elementary’s books last year by selling Christmas-themed socks and ornaments made by two of its members, Diana Harris and Eileen Kines, respectively.

“It’s really powerful for kids to be able to purchase their own books, select the one they want. It’s brand new. It’s not been used. So, there’s value. That’s important,” she said.

While appreciative of the DAR’s support, North said she would welcome others who want to promote literacy among her students.

“We’re actively seeking a business partner to help maintain this vision and to support us with our reading initiatives,” she said. “We have to stay committed to keep it going.”