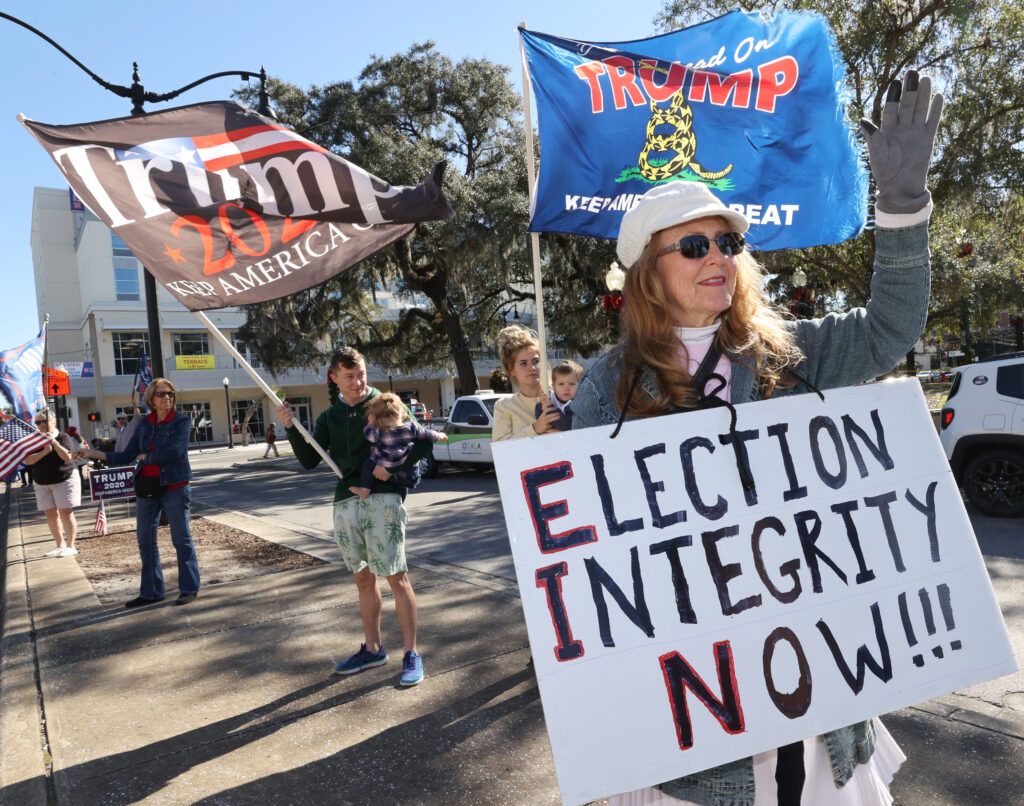 Vicki Stewart of Melrose holds a sign as she waves to passing motorists during a President Donald Trump rally on the Ocala downtown square on Wednesday. [Bruce Ackerman/Ocala Gazette]

Vicki Stewart of Melrose holds a sign as she waves to passing motorists during a President Donald Trump rally on the Ocala downtown square on Wednesday. [Bruce Ackerman/Ocala Gazette]

Some Marion County supporters of President Donald Trump say they are being painted with too broad a brush after Wednesday’s protest in Washington D.C. turned deadly when some in the crowd stormed the U.S. Capitol.

Glen Fiorello, chairman of the Trump Club of Marion County, wondered if those who spurred the violence were even legitimate Trump supporters.

“From what I can determine, the violent actors have very close resemblances to some of those Antifa members from the past,” Fiorello said.

“The whole thing was a set up by Antifa. That’s the way these people operate,” Stacy said.

Law enforcement has not linked Antifa to the Capitol takeover, however.

The violence erupted after thousands descended on Washington ahead of Congress confirming President-elect Joe Biden won the election.

Millions of Trump supporters have continued to argue the election was not fair and point to possible voting machine inconsistencies, as well as other largely unsubstantiated voter fraud allegations.

But for Fiorello, who helped organize a gathering in downtown Ocala on Wednesday in connection with other rallies across the country, violence is never the answer.

In Ocala, several people showed up waving flags and signs in support of Trump. The gathering remained largely peaceful. He bristled at the gathering even being called a protester.

“We weren’t protesting. We were supporting our president. The two things that were required for attending was support for our president and to be respectful. We’ve always taken the high road,” Fiorello said.

Stacy said even the Washington gathering was not a protest.

“It was a rally to support the president and bring the fact that they stole an election to everyone’s attention. It was not a protest,” he said.

At least one Ocala resident was in Washington on Wednesday. Bridgitte Smith, who lives in Ocala and is active in local politics, including having run for office at least twice, said she didn’t fully realize what had happened until Friday.

“We had no idea what was going on in the front. We’re a mile away, and it was wall-to-wall,” Smith said. “We started hearing rumors. But all I experienced were people praying, singing and exercising their right to independence. It’s upsetting that they are painting everyone that was there as an insurrectionist.”

Smith said she didn’t get the full grasp of what happened until she sat down and watched the videos on Friday. She and two friends were on the road most of the time, having driven to Washington and back.

“It’s disgusting. Those responsible should all be prosecuted,” Smith said. “I hope they do find out who they are and arrest them all. They need to be held accountable.”

Another Marion County resident was arrested during the demonstration. Michael Curzio was charged with unlawful entry by U.S. Capitol Police.

In 2012, Curzio shot another man in a dispute over a woman. He served eight years on a conviction for attempted first degree murder. He was released from prison in February 2019.

Kat Cammack, recently sworn-in U.S. Representative whose 3rd Congressional District covers part of Marion County, was inside the Capitol when it was breached.

“Today, while objecting to the electoral college certification of states with explicit election irregularities, the Capitol was breached by protesters. The situation escalated quickly with members being notified that nearby buildings were being breached,” Cammack said in a press release.

She said as debate continued, protestors reached the doors to the house floor.

“As attempts to gain entry into the chamber grew in intensity, I witnessed fellow members joining with Capitol Police to further barricade doors by piling furniture. They also began breaking furniture to provide themselves with any means of defense they could find. Within minutes, the sounds of shots began coming through the door,” she wrote.

She and the other members of congress got out safely.

“In the midst of fighting a legitimate and most serious objection to the certification of the states with egregious election violations, we were stopped. We were stopped by people not intent on fighting for our Constitutional Republic and our constitution; instead, they wanted to tear it down,” according to her statement.

Fiorello said the local Trump Club will continue supporting the president in a non-violent manner.

“We’re not out to do damage or anything. I’m not about to be throwing rocks or burning anything,” he said.

For Smith, the experience convinced her to focus more on local and state politics in the future.