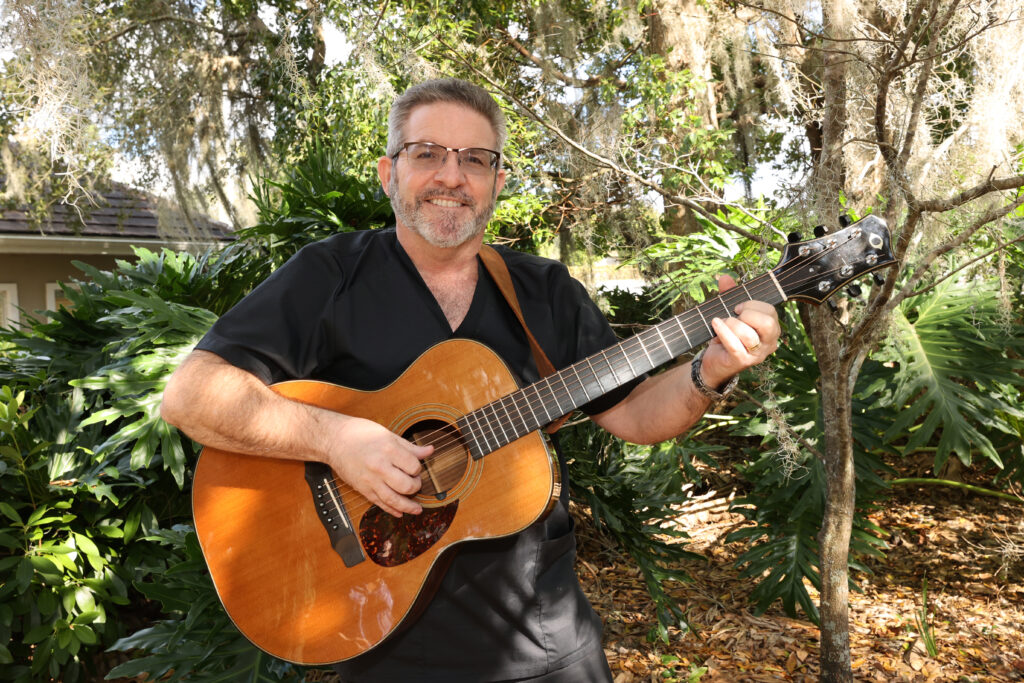 Dr. Scott Jackson poses for a photo at Jackson and Joyce Family Dentistry on Southeast 18th Avenue in Ocala on Tuesday. Jackson won the best Florida song of 2021 at the Will McLean Festival. He won with “Florida Highway,” but also took second place with “Freedom Had To Wait.” [Bruce Ackerman/Ocala Gazette]

Dr. Scott Jackson poses for a photo at Jackson and Joyce Family Dentistry on Southeast 18th Avenue in Ocala on Tuesday. Jackson won the best Florida song of 2021 at the Will McLean Festival. He won with “Florida Highway,” but also took second place with “Freedom Had To Wait.” [Bruce Ackerman/Ocala Gazette]

Scott Jackson has been playing music since he learned the banjo and guitar from his dad when he was a kid.

Now, at age 56, the Ocala dentist is an award-winning singer-songwriter.

Jackson recently won first- and second-place awards in the Best New Florida Song Contest at the Will McLean Festival.

It was a big achievement for a singer who has only been writing his own songs for the last five or six years.

“I couldn’t believe it when I got the phone call. I was floored when she told me I won,” Jackson said. “I was very surprised; I did not expect it at all.”

It was the second time Jackson entered the songwriting contest held in conjunction with the annual Brooksville folk music festival.

“I think I’ve always wanted to (write music); I just never took the leap to do it,” Jackson said.

The inspiration for the song came during a road trip to the South Florida neighborhood where he grew up. In the smooth, melodic refrain, he reminisces about his childhood home and the rosewood tree on the corner, concluding that “no matter where you’re from or where you roam, it’s friends and family that make it home.”

“I was just thinking about that nostalgic feeling that you get when you go back home to somewhere that you haven’t been in a long time,” he said. “And how sometimes you go back and realize it’s not necessarily the place but the people and the family that were there that made it yet special, not just the place.”

Jackson’s second-place tune, “Freedom Had to Wait,” is a Civil War ballad about the Battle of Olustee, fought near Jacksonville. He’s looking forward to performing both songs at next year’s Will McLean Music Festival in March 2022. As a partner in a busy dental practice, he doesn’t get many opportunities to perform.

“I’ll be there next year to play,” Jackson said. “It’s my only hobby. I don’t play golf or hunt or anything like that, so basically, it is my only outlet.”

He said winning the McLean contest, named after “the father of Florida folk,” has convinced him to focus more on writing new music.

“I definitely have confidence now to do more of it,” he said. “I try to create a visual thing. If I’m writing a song, I kind of see visuals.”

Jackson said the music his sister introduced him to growing up, including James Taylor and Jim Croce, influences the songs he writes. He’s currently working on a couple of new songs he plans to introduce on his YouTube channel. He hopes his feel-good folk music can bring listeners a bit of the escape it provides him. Winning the song contest, he said, “was the best thing that happened to me in the whole year.”