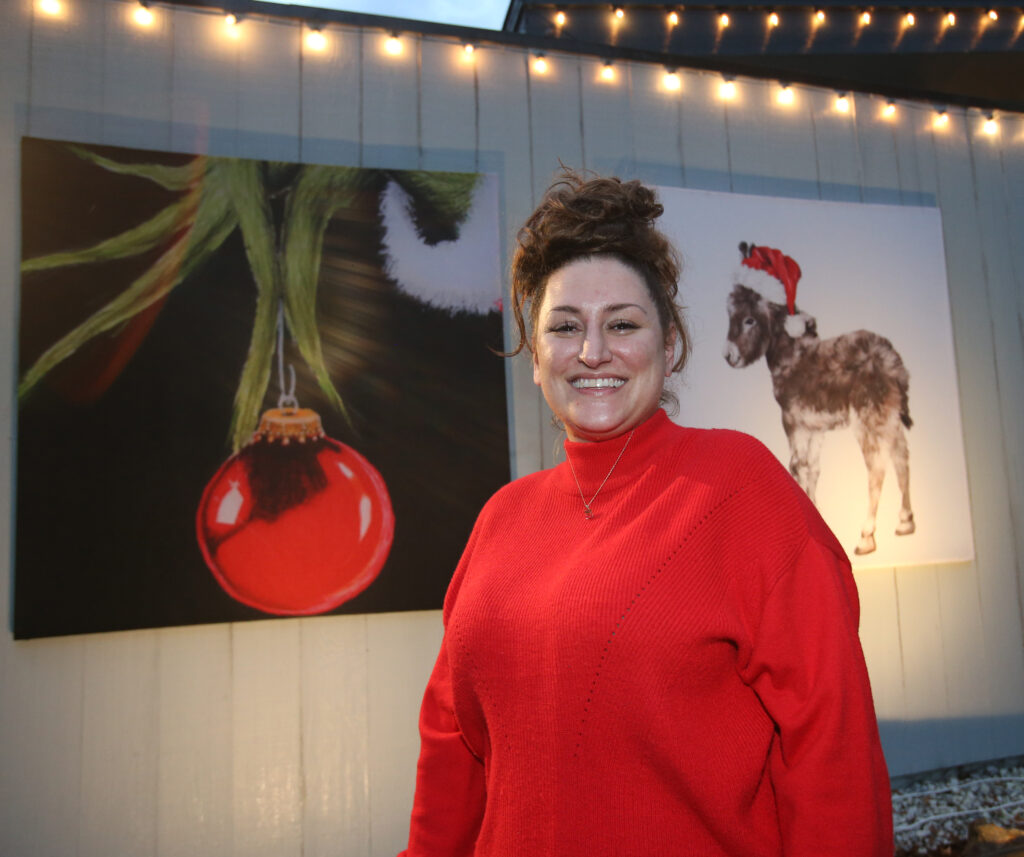 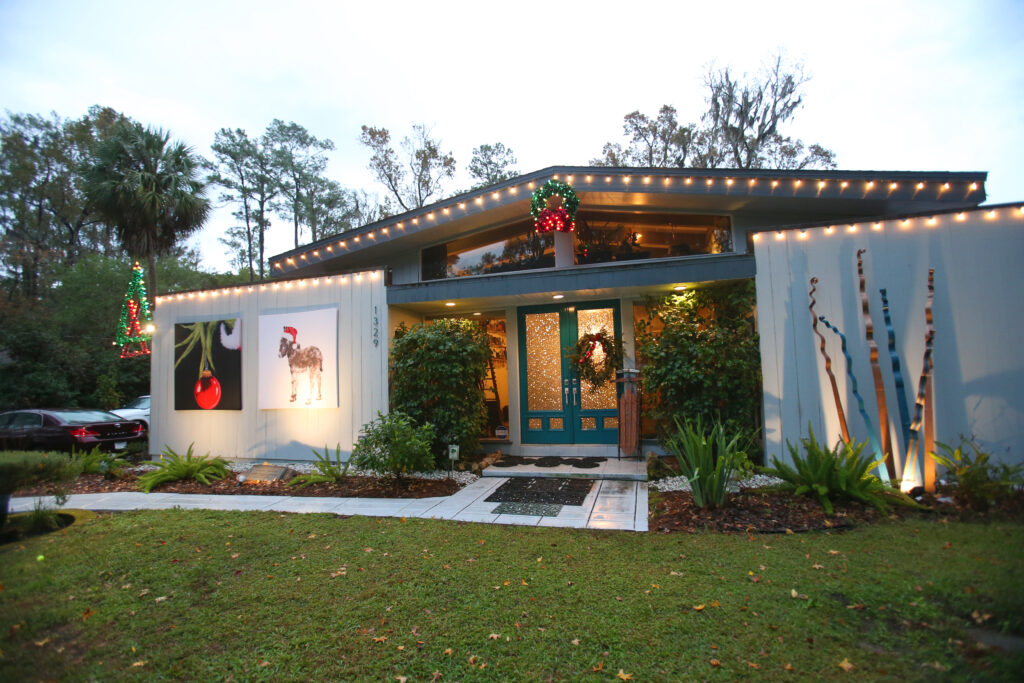 On a quiet street in Ocala’s Woodfields neighborhood, one resident is drawing second looks at her mid-century home, which sits back on an expansive lawn amid towering oaks and palm trees.

Leena Williams calls the plain wooden paneling on the front of her 1960s home very brutalist and squared off.

The area currently features two large Christmas-themed artworks: A fuzzy donkey wearing a Santa hat and another of the Grinch’s long, green fingers holding an ornament.

Growing up one street over, Williams said she admired the house with all the glass nestled among the trees.

When she moved in a few years ago, she and her sister, Diana, decided she needed to find a way to display art outside.

“I like to drive up and have a pop of color,” Williams said. “My sister was like, ‘Everything in your house is like a museum; you should try to make the outside reflect a little bit more of your personality.’”

The challenge was figuring out how to display art outdoors. The solution?

Williams stretches the lightweight fabric onto wooden frames. Her collection stands at around 24 – two for each month.

“It’s themed to the month, but I would say they have a little bit of a statement attached,” Williams said. “It’s all about what you associate with that month or that holiday. I am an Ocala girl, born and raised here, fifth-generation Ocalan on my dad’s side… I really care about wanting to highlight things that are Florida native or are in that vein.”

In September, for Labor Day – alongside Rosie the Riveter – she displayed an image of Citra’s iconic Orange Shop.

“Migrant farm laborers were one of the first labor unions to exist in the country,” she explained. “We have a citrus industry that is comprised of a lot of that kind of labor force. So you have your Rosie, and you have your Orange Shop, and no one gets it. But it doesn’t matter because I get it, and I love it,” she said with a laugh. “But if you drive by, it can be a little bit of a puzzle.”

With her love of fine art and her background as an English teacher, Williams can’t resist displaying images including famous Van Gogh and Dalí works as well as her literary collection. 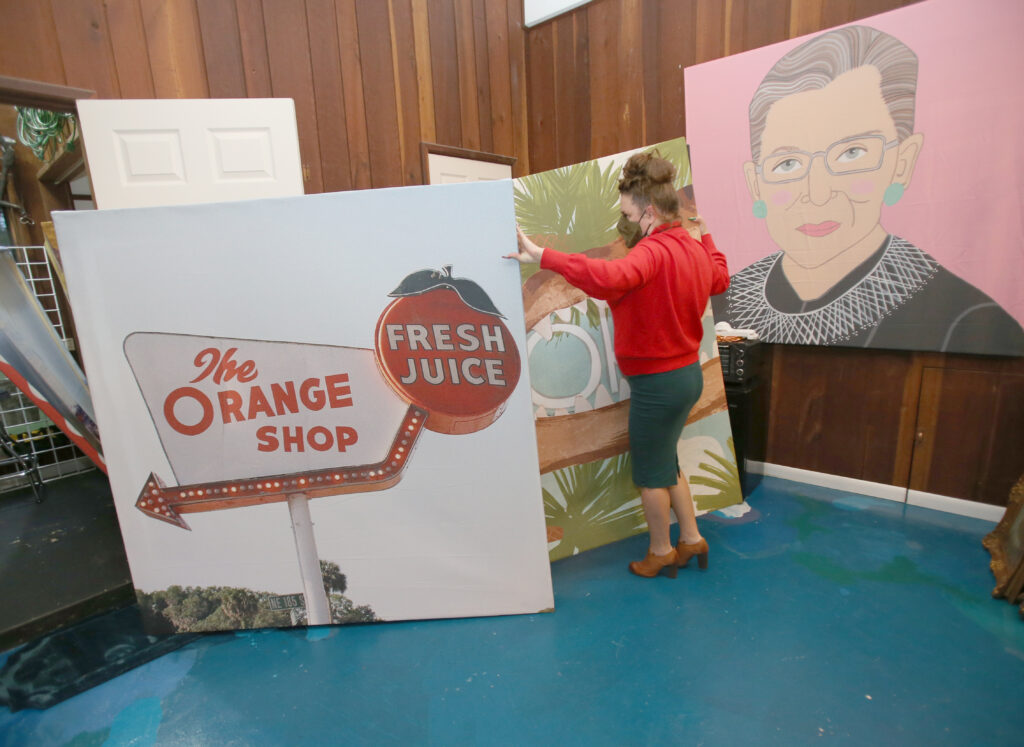 Leena Williams looks over artwork that is in storage inside her home in Ocala, Fla. on Wednesday, Dec. 16, 2020. Williams has numerous pieces of artwork which she displays outside her home for different seasons during the year. The artwork is actually displayed on shower curtains, which she said that she orders from Society6.com. [Bruce Ackerman/Ocala Gazette] 2020.

“For Halloween, all of them were literary in nature, like Edgar Allan Poe and the play ‘Wicked,’ which is about the Wicked Witch of the West,” she noted. “And I like all different kinds of the arts. I often look for things with a literary connection or a historical connection or some kind of academic meaning.”

She orders many of the shower curtains from the Society 6 website, which offers art printed on a wide range of textiles and home goods.

Like Oscar Wilde, Williams believes “imitation is the sincerest form of flattery,” and she was touched when an anonymous neighbor left rocks painted to match her displayed art on her porch. When a couple down the street asked if they could “steal her idea,” Williams encouraged them.

“I was like, ‘go for it!’,” she remembered. “I would love to see more people doing it. Everybody would put up something different. I would love to drive around and see what other people do.”

Williams, who said she dabbles in arts and crafts but isn’t “shower-curtain good,” said she is trying to give the neighborhood “something beautiful to look at.”

“Art is really amazing and beautiful,” she remarked. “It’s thriving, and I’m so proud of our community for prioritizing that. It’s about supporting the arts and supporting the culture of where you live. And it’s been such a tough year. We can’t connect physically right now, so being able to drive by and just say, ‘that’s a kindred spirit,’ can be really powerful for people, I think.”