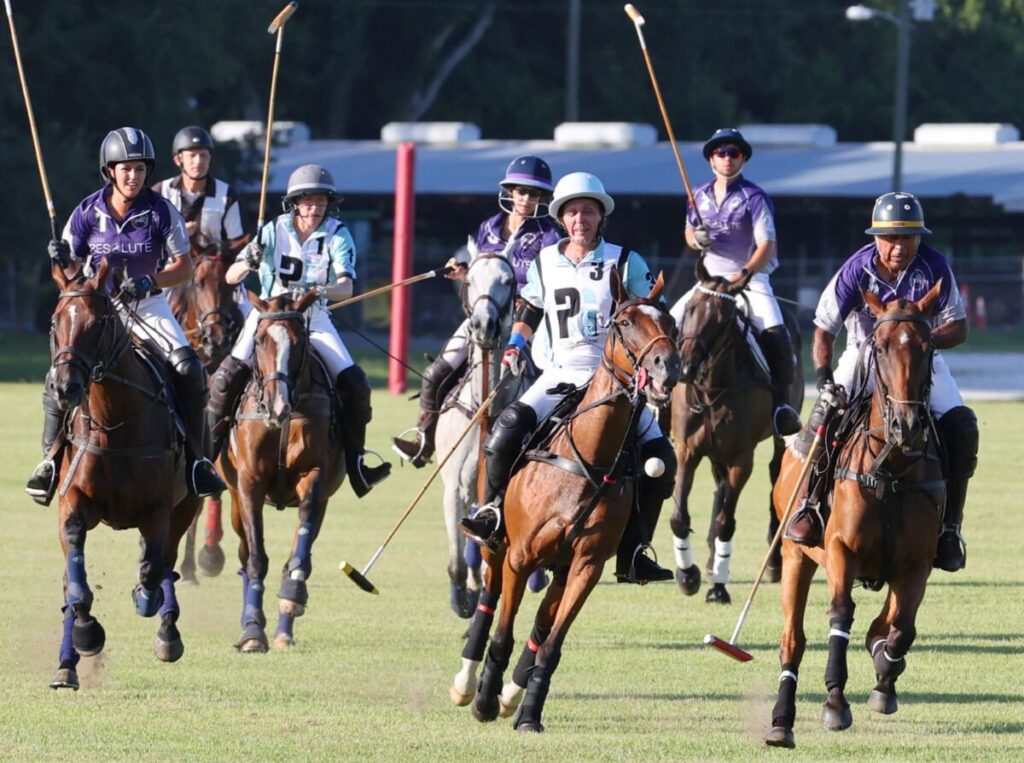 Guillermo Jeime of the Piccin and Glynn team, third from right, battles for the ball with Lupe Castro of the Resolute team, right, as other players charge in behind them in a herd of ponies during an Ocala Polo Club Sunset Polo Match at the Florida Agriculture Center and Horse Park south of Ocala, Fla. on Saturday, July 30, 2022. [Bruce Ackerman/Ocala Gazette] 2022.

The fast-paced and competitive sport of polo, widely considered among the oldest organized sports ever played and traditionally considered a society game, has evolved over the years to where it now reaches a much broader base of enthusiasts. Thanks to Dr. Lauren Proctor-Brown, who operates Resolute Equine Sports Medicine, and her business partner David Eldredge, a former Cornell University polo coach, the historic sport of polo is enjoying a resurgence in Ocala/Marion County.

“There was a lot more polo here in the early 2000s,” said Proctor-Brown, who is originally from Wisconsin and who was introduced to polo while attending veterinarian school at Cornell where she met Eldredge. “There were a couple of other clubs around and then this one (Ocala Polo Club) eventually fell dormant. Ocala is horse paradise. I grew up with horses doing Hunter-Jumpers and eventing and then got into polo when I was in vet school.

“We got the club started back up in 2020. Not quite the perfect time to start a polo club and bring people together,” Proctor-Brown added. “Honestly, it has worked out pretty well, though. Because of the pandemic, we ended up staying in Ocala year-round that first year. Polo up north was canceled; the northern states canceled everything, including all sports events. So, we had normally gone back to New England for polo in the summer, but since it looked like there wouldn’t be anything, we stayed in Florida. We played around and dabbled with a close group of people. We played later on in the day over the summer, just trying to be smart about it. We realized playing in Florida year-round isn’t that bad. It kind of blossomed from there.”

Safe to say the future of the Ocala Polo Club is in good hands with Proctor-Brown and Eldredge who both play, coach, and offer lessons.

Proctor-Brown, a Division I athlete at the University of Louisville where she attended school on a rowing scholarship, obtained a BA in Biology and a BSBA in Equine Business. From there, she earned her Doctor of Veterinary Medicine degree from Cornell University, where she discovered polo in earnest. Her love of the game has continued to grow over the last six years and today she is enjoying life in the “Horse Capital of the World” where she competes with Team Resolute on the polo field and offers her veterinary services to horses of all disciplines through her Resolute Equine Sports Medicine.

“When I was an undergrad at Louisville, I was rowing, and they found out I could ride,’’ she said. “My coach understandably told me no. When you’re on a full (scholarship), they don’t want you getting hurt playing a different sport. So, of course, when someone tells you no, it’s like, ‘Now, I want to do it.’ I went to Cornell for vet school, and I ended up having my horse at the equestrian center where the polo team practiced.

“The winters are long there, and at one point, I picked up a mallet and was just messing around with my jumper and someone saw me and said, ‘I can teach you how to do that correctly.’ That someone might have been David. Once you get into it, it is a really cool horse discipline. I was a rower and that is a team sport, but in most other horse disciplines you don’t have a team. It’s just you and your horse. So, for polo, you have you and your horse, and you’re working as a team and have teammates to compete with. It’s one of the only horse disciplines where you compete as a team. Polo marries all of it for me.”

Eldredge, who started playing polo at the age of 9 and was competing in his first game by age 10, boasts 50 years of experience playing and coaching both in arena and outdoor polo. He is recognized as an honorary certified polo instructor by the USPA and he competed in intercollegiate polo for Cornell University, starting for all four years and as captain of the team for three. He then served as the assistant coach at Cornell from 1981-85 and served 33 years as the head coach. During his tenure at Cornell, Eldredge led the men’s and women’s polo teams to a combined 14 national titles and 37 national championship appearances. He also held his own during his professional career and gives back to the polo community by serving the USPA on both the arena and outdoor rules committees.

“When David was growing up on a dairy farm, there were a lot of little polo clubs in small communities, and they would compete against each other in the area, and it was friendly low-goal community polo,’’ Proctor-Brown said. “Then you had the high-goal (polo is divided into three levels—low-, medium-, and high-goal), high-level polo where all the multimillionaires competed, and that’s a different kind of game. That is major leagues versus your minor league baseball team, and that’s just not inviting to bring more people in. It has also alienated a lot of people.”

According to Proctor-Brown, polo is no longer just a game for the posh. Thanks in part to communities like the Ocala Polo Club, the sport is more welcoming these days with people of all ages and backgrounds getting involved.

“Polo has been undergoing changes. The number of players has decreased, and the number of clubs has also decreased,” she pointed out. “So, looking at it, we thought let’s bring people back together and let’s build a community to compete together and have people be successful. If they are successful and move up in the ranks and go play at a high-goal level, we love that, and we can all grow together. There are also a lot more women in the USPA playing polo now, so building a safe place for women where they feel they can get out there and compete and take some risks and learn a new sport and play on coed teams was important.”

As far as fan growth and expansion are concerned, Ocala Polo Club is making great strides within the local community.

“In the summer, we do matches at 6 p.m. after the sun begins to go down and after the storms have come through and cooled everything off,” Proctor-Brown shared. “In the winter, we do Sundays at 1 p.m., which is a typical time for Sunday afternoon polo and tailgating. It’s great.

“I think the fans love it,” she added. “Our spectatorship has grown like 20-fold. When we first started, it was me and a couple of friends. That’s how it felt. Now, in the winter, we can fill the sideline (300 yards). This coming winter, we’re going to start opening the far side, the other sideline. We’ve really grown a lot. It’s exciting for us, and we love our spectators. It makes for a fun day for people. It’s family-friendly, it’s still reasonably affordable, and it’s easy to just drive up and tailgate and spend a couple of hours outside in the fresh air with friends. We have retired people come out who’ve never seen a horse sport in person. We see families with kids and even college students from the University of Florida.’’

For those new to the sport, the announcers at the matches do everything they can from the booth to make sure the action on the field is thoroughly explained.

“Our announcers are really good at teaching spectators about the game,” Proctor-Brown said. “We expect that a lot of first-time spectators may not know the sport, so (the announcers) walk you through it, keep you engaged, and explain fouls when they happen. They make it inviting for new people. I understand more about polo listening to our announcers than I ever learned watching a football game.

“We also have a booster club and those members love talking to new people about polo and explaining things to them. We have a lot of season-pass people as well, and they enjoy following the teams and the players. This is your hometown, and your local doctor or veterinarian going at it and competing on the weekends. It isn’t Tom Brady or professional athletes. You can watch people from your town go out and compete and grow and get better. It’s a lot of fun, and maybe more like minor league baseball in that respect as opposed to the pros. There is a little more interaction with fans and players.”

Ocala Polo Club’s relationship with the Florida Horse Park is proving to be an ideal union in bringing together equestrian enthusiasts.

“The Florida Horse Park is just great,” Proctor-Brown said. “We love that it is multidisciplined. We love seeing all the different disciplines come through here. We love when we get opportunities to work with them and we like being involved in a horse community. A lot of people who play polo have done other (equestrian) disciplines in the past or currently. Some people are really involved in the racing community or involved with jumpers. Polo brings a lot of people together, and that’s what we like.

“At the Horse Park, we see different disciplines every week and we get to talk to everybody,” she continued. “At the Horse Park, you can see polo, cutters, dressage, eventing, and even dog shows. Ocala is amazing. You can do so many different disciplines here that you just can’t do in many other places, and you can do them at a high level here. You just can’t find that everywhere, and that’s what makes it cool.”

For those interested in attending a match or possibly giving polo a whirl, Proctor-Brown suggests attending an upcoming match and sticking around after the contest to speak with the participants.

“Come out and check out a match,” Proctor-Brown said. “We usually have a wooden horse at the field, so you can check out how to swing a stroke. You can hold a mallet and see what the balls are like and meet and talk to the people involved. If you come to a match, hang out afterward so you can talk to the players following the awards. We can get you going in any direction, whether you want season passes or to get involved in lessons.

“Players on Team Resolute end up playing with and against everybody,” she added. “Depending on the different skill levels and different leagues that we are doing, we mix everyone up frequently. So, today, you might be competing against this person and then next week you are competing alongside them. That kind of helps build the club community aspect of it. We get new people joining all the time, even over the summer. We’ve had people join us from Texas, and New England, and we even had a player from Colombia who was in Ocala for other reasons, and she played with us for a bit. We welcome new people to the club very fluidly. We welcome them with open arms, and that’s a beautiful thing because it’s not like that with all polo clubs.”

Visit Ocalapolo.com for tickets and more information.
Season tickets and single match tailgate spaces can be reserved. Community spaces are on a first-come, first-served basis and free.