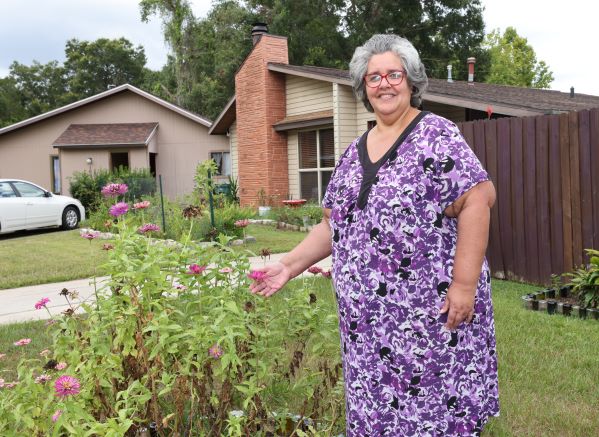 Laura Miner poses for a photo by her home in the La Jolla subdivision in southwest Ocala, Fla. on Monday, August 8, 2022. [Bruce Ackerman/Ocala Gazette] 2022.

Laura Miner did not set out to move to Ocala on purpose. Her family’s story has several unusual occurrences that brought them to this locale.

Born in Miami Beach to immigrant parents–her dad from Cuba, and her mother from Colombia–Laura spent most of her life in South Florida. The family moved to Ft. Lauderdale, then to Pembroke Pines, close to the Everglades, where they lived for 19 years. Laura married and had a son, Peter, who is now 34, and lives in Jacksonville area. She and her husband later divorced.

Laura met Howard Miner, who was an insurance agent, while she was working as a secretary in a broker’s office. The pair dated and decided to go to the courthouse in Pembroke Pines to get a marriage license.

It had seemed like an otherwise ordinary day when suddenly there was a flurry of activity in the courthouse, with people running to and fro. The couple asked what was going on and were told an airliner had struck the World Trade Center tower in New York City. While they completed the paperwork for their marriage license, they heard that a second airliner had hit the second WTC tower. They were able to get the license completed before the courthouse was shut down and evacuated.

They had expected this would be a special day for them, but they never dreamed that Sept. 11, 2001 would go down in history, a day with worldwide implications. They married on Sept. 30 of that year.

The couple has two children: Daniel, 25, who lives in Oldsmar, in Pinellas County, and Sara, 24, who lives at home. The children, who were so close in age, were inseparable growing up, Laura recalled.

Laura began a career as a body shop manager at a Lexus dealership in Pembroke Pines.

In uncanny timing, both of Laura’s parents became ill at the same time. Her father developed a blood clot requiring surgery, and the procedure became complicated. The family believes the anesthesia he received caused dementia, from which he did not totally recover.

Her mother was diagnosed with rapidly progressing Alzheimer’s disease. She had to be watched constantly so she did not wander outside of the house or get into other dangerous situations.

With her parents not being able to care for each other or themselves, Laura felt she had no choice but to resign her position at the dealership and move into her parents’ home to care for them. They could not accommodate them in her family’s home. Laura would try to go home for the weekends to be with her own family, and Howard became “Mr. Mom” for their children and the home.

Laura began to suffer from sleep deprivation as well as stress, a situation to which many caregivers can relate. It became evident, because of the level of care her mother required, that she had to be placed in a facility. Laura’s father began having seizures and was diagnosed with epilepsy. While he was hospitalized, he passed away. Her mother passed 27 days later.

The couple’s son graduated from high school and decided to go to college.

After “recuperating” for a time, Laura worked for about a year for a call center for Disney World, a job that she could do from her home.

Then, their daughter, Sara, became ill.

“My world stopped,” Laura said. Sara has been diagnosed with neurocardiogenic syncope, which is a condition in which a person experiences a sudden drop in blood pressure and heart rate. “She faints,” Laura explained.

Doctors said the illness is stress-related, and it overwhelmed Sara when her grandparents passed away, and soon after, her brother, who she was so close to, moved away to college. Sara went from being an “A” student to one who at least one of her teachers thought was in danger of failing. She sometimes fainted at school and began to be less social and less academically able.

Counselors recommended she be home schooled, and she was enrolled in Florida Virtual School (FVS). Her classes were basic and offered no social events. Sara would become frightened if faced with unknown situations, and developed agoraphobia, a fear of everything, becoming more reclusive. Despite her challenges, Sara graduated in 2017. She is receiving exposure therapy. Therapists believed that if the family lived in a smaller geographic environment than Pembroke Pines, Sara would be better able to function.

Howard had retired, so the couple sold their large, four-bedroom house in Pembroke Pines, packed everything into a storage unit, got an RV, and headed toward northern Florida to explore places where they might like to live. This was not a small feat since they were also traveling with three bearded dragons (lizards), all rescues, and two large dogs.

They stopped in Ocala at an RV park and were immediately drawn to the area.

“Then Covid hit,” Laura exclaimed, and the family found themselves confined to the RV. “This, too, turned out to be a blessing in disguise,” she said. Sara was comfortable with the small space. “I loved the RV park here,” Laura said. “The people are so friendly, and there were many activities available for tenants.”

The family contacted a real estate agent and in 2020 bought a home in the La Jolla development in southwest Ocala. “Ocala is a little, hidden-away area, close to everything. And we can take I-75 to visit our son,” Laura said.

Sara is showing interest in continuing her education here. Her interests are in both cinematography and history.

Meanwhile, Laura is using her business acumen as president of her homeowners association board. “I’m all about people and want to do the best I can for the community,” she said, admitting she has ideas to bring to the area where she lives. “I’m not moving again,” she emphatically said.