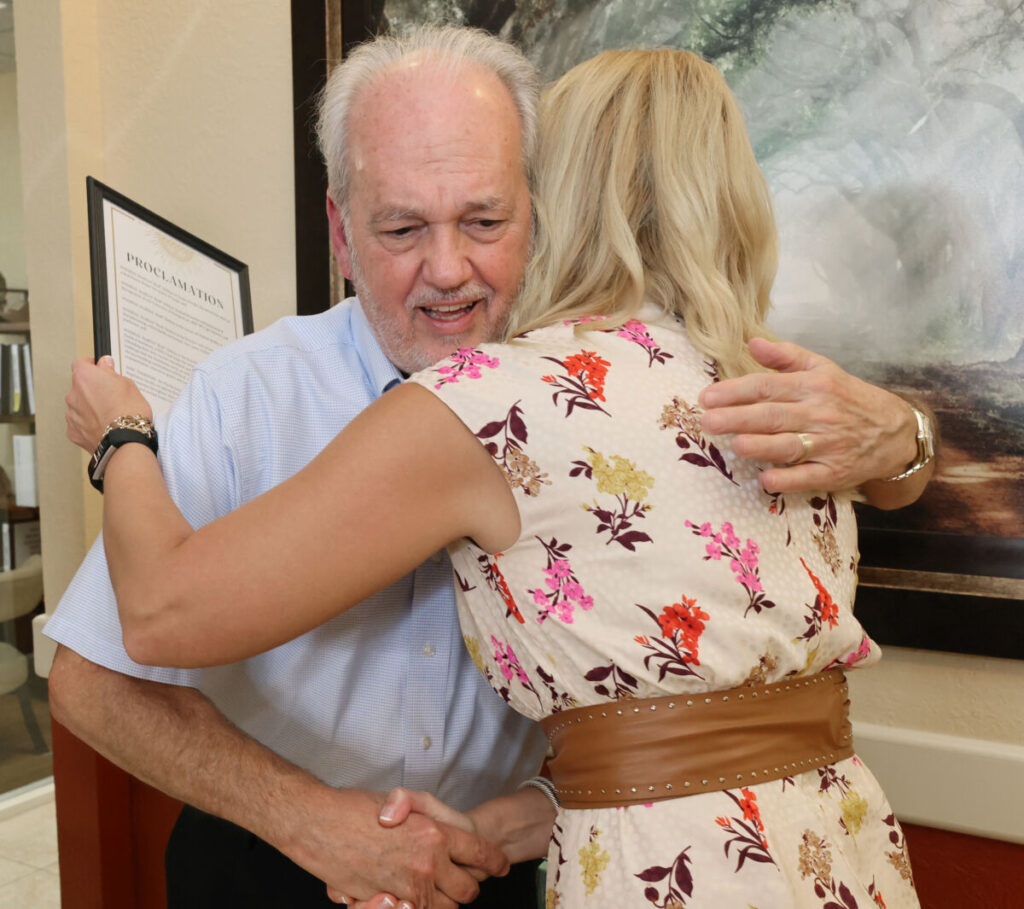 Brad Dinkins gets a hug from Melanie Griffin, the Secretary of the Florida Department of Business and Professional Regulation, as she honors Dinkins with a proclamation for 30 years of service to the state of Florida and Marion County at Dinkins Realty on Northeast 16th Avenue in Ocala, Fla. on Friday, Sept. 2, 2022. Griffin also honored Counts Construction and Rashad Jones of Big Lee’s Serious About BBQ. [Bruce Ackerman/Ocala Gazette] 2022.

Sometimes it takes a newbie on the job to help us recognize those who’ve been around a little longer. Such is the case for a thorough state official and three reputable Ocala businesses: Counts Construction Inc., Dinkins Realty and Big Lee’s Serious About Barbecue.

Melanie S. Griffin, the recently appointed Secretary of the Florida Department of Business and Regulation (DBPR), has been in her position less than a year but has quickly gotten busy traveling the state to present proclamations to “stellar licensees” across Florida.

The triple Florida State grad initiated the agency’s recognition process and stopped in Ocala earlier this month to honor three of the city’s most popular and enduring businesses.

On Sept. 2, she presented a proclamation in honor of Glenn Counts and his two sons, Toby and Todd, at Counts Construction Inc., for the family’s 62 years of service as certified general contractors. Secretary Griffin visited them onsite at 3021 NW 21st St., Ocala.

“I think the biggest edge we have is that we are friends with our employees and we’re — I guess the word is — entangled with their lives,” Glenn Counts said about his employees’ loyalty, which he credits as a major contributing factor to his company’s success.

“We check on their families, we check on everything about them and their personal lives,” Counts added, “and that brings you something special from the employees.”

The company’s BuildZoom score of 103 ranks among the top 10 percent of 191,428 Florida licensed contractors.

Later that afternoon, Griffin presented a proclamation to honor Brad Dinkins for 50 years of service as a real estate broker at Dinkins Realty, 101 NE 16th Ave.

In addition to assisting in the purchase and sale of Marion County-area parcels, Dinkins runs Helping Hands, a nonprofit charity established to provide shelter and related assistance for the unhoused and others in difficult situations. Helping Hands assists residents with jobs, food, clothes, medical, dental, transportation, counseling, Bible study and fellowship, and other needed services.

“I was born here in Ocala 71 years ago, and my dad (Clarence Lewis ‘C.L.’ Dinkins Jr.) started the business,” Dinkins explained. “I got involved in 1973, and we own 99 percent of the properties we sell, which came about from our construction business. In fact, we’re building some homes right now that offer affordable housing to make the cost of living less expensive for people in need.”

The Florida DBPR secretary also stopped by Big Lee’s Serious About Barbecue, at 343 NE First Ave., to honor Rashad Jones for his many accomplishments in the food/barbecue industry.

The proclamation for Big Lee’s praised the business serving Central Florida residents and visitors for eight years, honoring the menu’s roots in the Mississippi Delta with Leon “Big Lee,” uncle of Patrice, the wife of owner Rashad Jones. 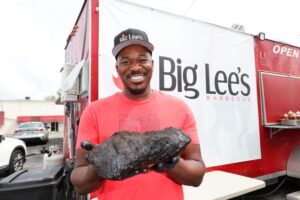 The Big Lee’s decree also credited Rashad for spending “at least 24 hours to prepare, smoke and serve,” and praised how only kiln-dried oak from Central Florida is used in their smokers. The document even mentioned the restaurant’s unanimous win in the “Bad to the Bone” barbeque contest in 2013 and how one judge remarked that it was not the best barbeque she’d judged but the best she’d ever eaten in her life.

According to Griffin, the nomination process involves exhaustive in-house research online as well as referrals from the public.

“For Counts Construction, we know that they do great transportation roadwork projects. They don’t require an electronic presence to receive the referrals for the type of work that they do,” Griffin explained. “So, that’s where we ended up doing more of a certificate and celebration of their multi-generational family business.”

Whereas with Big Lee’s and Brad Dinkins, which have a heavy internet presence, the DBPR was able to research online the specific projects’ initiatives that they have done for the community and within their profession, Griffin added.

“We’re not only looking for a cross-section of the geographic areas we’ll be visiting and the businesses who are outstanding or celebrating milestones, like five-, 10-, 15-year anniversaries, we’re also doing a good job of celebrating the more than 30 industries that we regulate,” the official said.

Among the honorees are trade organizations such as the Florida Roofers Association, which recently celebrated its 100th convention this year.

For more information about the Florida Department of Business and Regulation, visit facebook.com/FloridaDBPR.