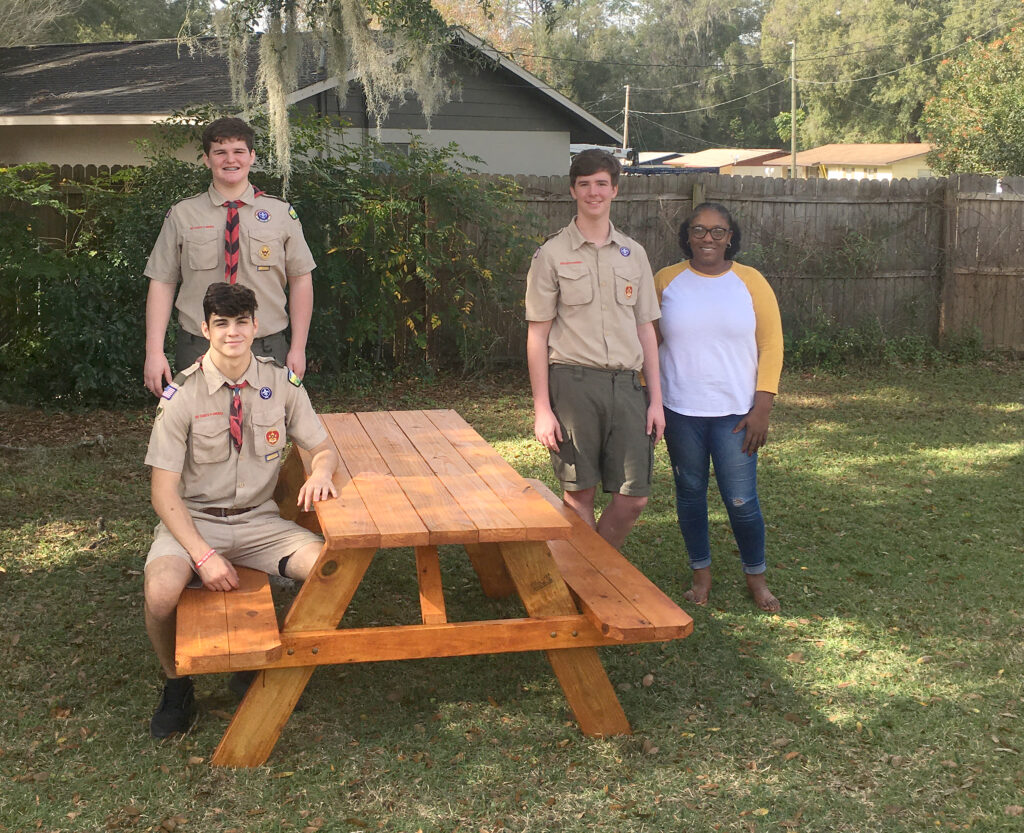 Eagle Scout Brock Ramey, 18, of Boy Scout Troop 72, second from right, poses with Brayden Ramey, 15, standing, on left, and Breyden Marquis, 17, sitting, on left, both also of Boy Scout Troop 72, and an unidentified Habitat For Humanity homeowner, right, as they deliver one of the picnic benches that were built in Ocala, Fla. recently. Brock’s Eagle Scout Project was to build picnic benches for some Habitat For Humanity homeowners in the Ocala/Marion County area. [Courtesy Photo by Jason Ramey] 2020.

Eagle Scout Brock Ramey, 18, of Boy Scout Troop 72, second from right, poses with Brayden Ramey, 15, standing, on left, and Breyden Marquis, 17, sitting, on left, both also of Boy Scout Troop 72, and an unidentified Habitat For Humanity homeowner, right, as they deliver one of the picnic benches that were built in Ocala, Fla. recently. Brock’s Eagle Scout Project was to build picnic benches for some Habitat For Humanity homeowners in the Ocala/Marion County area. [Courtesy Photo by Jason Ramey] 2020.

From the time he joined the Cub Scouts in first grade, Brock N. Ramey always knew he wanted to become an Eagle Scout, the highest rank in Boy Scouts of America.

After successfully completing all the requirements, including the lengthy review process and a service project benefitting the community, Ramey achieved this goal. He received his Eagle Scout Award in a Court of Honor ceremony at the Ocala/Marion County Veterans Memorial Park on Saturday, Dec. 12.

Due to COVID-19 restrictions, it was the first outdoor ceremony for Troop 72, which is sponsored by First Presbyterian Church of Ocala with Sandy Clardy as Scout Master.

For his Eagle Scout service project, Ramey provided picnic tables to six families residing in homes made available through Habitat for Humanity of Marion County’s Homeownership program. Ramey, 18, said he originally thought of providing benches for the families but then decided upon picnic tables.

“I thought the picnic tables would be a nice, small addition to their home,” he said. After his project received approval through the Eagle Scout board of review, Ramey obtained donations for the materials and with the help of fellow scouts, he assembled, stained and delivered the picnic tables to the recipients.

“All of the families except one were home when we delivered them, so they came out and said hi and thank you,” he said. “It was rewarding because you could tell from their responses that they were very appreciative.”

Habitat for Humanity of Marion County’s Volunteer Coordinator Tyler Starr said, “Our homeowners were so thrilled when Brock and the other scouts delivered these picnic tables. These families were in our Homeownership Program for 12-18 months helping volunteer and build their home, so the picnic tables were a beautiful addition for these families’ new homes.

“It’s such a blessing to see the compassion and hard work these young men put forward in helping in our community. We want to give a huge thanks to Brock and his troop for helping make these homes just a little extra special,” he added.

Throughout the process of completing his project, Ramey faced a few challenges. COVID-19 restrictions delayed some aspects, he said, but the most frustrating occurrence happened when the purchased materials and the borrowed trailer they were stored in were stolen.

“The theft was devastating,” said Lyndon Bonner, Troop 72’s Life Scout Mentor for Ramey’s troop. “But true to Brock’s nature, he stepped up and was able to complete the project anyway,” he added, making mention of the generosity of troop members and family members and friends who helped fundraise a second time. “It was remarkable how (Ramey) overcame adversity and stayed on schedule, and he was an inspiration to a lot of folks,” said Bonner. “I’m very proud of him.”

Brock graduated from West Port High School this past spring, where he was a member of the school band’s drumline. He currently attends the University of South Florida, and is pursuing a degree in mechanical engineering.

He said he was originally inspired to become an Eagle Scout by his father, who became an Eagle Scout years ago, and that he thoroughly enjoyed his scouting experience, especially because his troop was heavily outdoor-focused. Although 21 merit badges are required for aspiring Eagle Scouts, Raney earned 29, and his favorite was for sailing.

“In the Scouts, we all feel like family, and it was a fun experience learning all the leadership skills,” he said. He admitted that there were times he became unmotivated to complete his Eagle project, but he received a lot of support from fellow scouts, including his brother Brayden Ramey, 15, and a few who already achieved Eagle rank, as well as scout leaders and especially his parents, Jason and Melanie Ramey. “I really appreciate their encouragement to stick with it. In the end, it was definitely worth it,” he said.