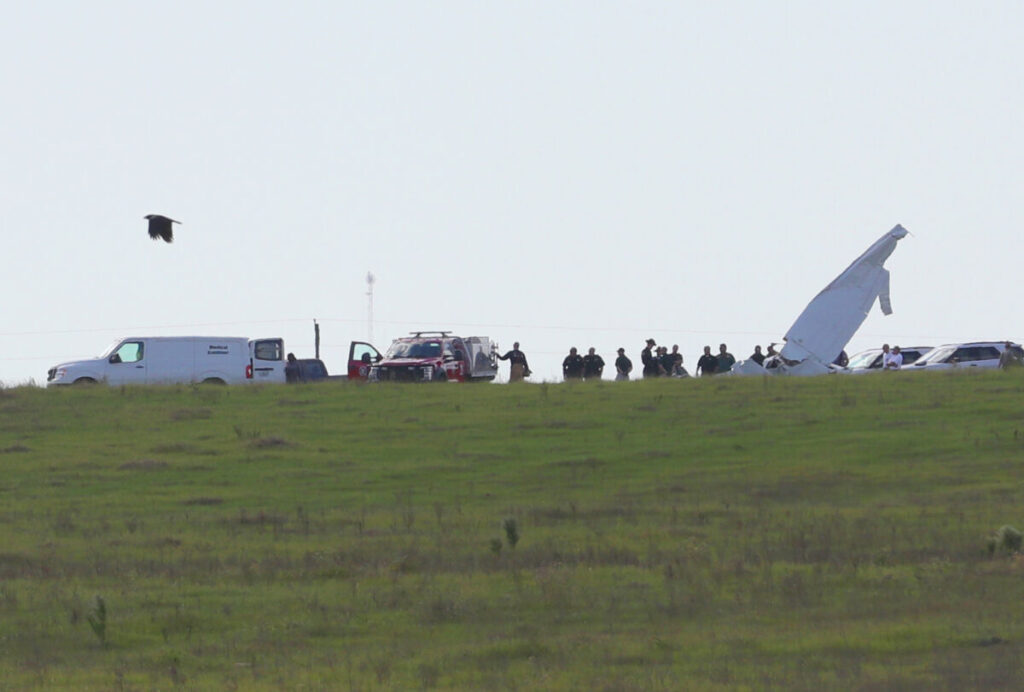 Emergency workers work at the scene of a plane crash where Ocala Police Chief Greg Graham was killed near the Dunnellon Airport in a field opposite the 9500 block of Southwest 140th Avenue near Dunnellon, Fla. on Sunday, Oct. 25, 2020. [Bruce Ackerman/Ocala Gazette] 2020.

Editor’s note: This article was updated to include toxicology information.

The National Transportation Safety Board issued its final Aviation Accident Report for the plane crash that took the life of Ocala’s police chief Greg Graham on Sunday, Oct. 25, 2020.

Prior reports indicate Graham took off around 10:34 that Sunday morning from Back Archers Airport in Belleview in his 1966 Cessna 172H single-engine plane, flying over Lake Weir before turning west and heading toward the Marion County Airport, also known as the Dunnellon airport. He was flying at 1,250-1,300 feet when at 10:38 a.m. Graham began a slow decent to 900 feet before climbing back to 1,000 feet, the report states.

Graham was flying alone when his plane crashed in a pasture along Southwest 140th Avenue east of the airport.

The National Transportation Safety Board determined the probable cause of the accident to be “a total loss of engine power due to fuel exhaustion. Contributing was the pilot’s exceedance of the airplane’s critical angle of attack, which resulted in an aerodynamic stall/spin and loss of control.”

In the report’s analysis, the Cessna 172 piloted by Graham started decreasing speed about 20 minutes after departure. “Data from the airplane’s onboard engine analyzer revealed that this deceleration was preceded by a sudden and simultaneous drop in the airplane’s fuel flow rate and exhaust gas temperature (EGT) values, consistent with a loss of engine power.”

“Following the accident, less than 1 gallon of fuel was recovered from the intact right wing fuel tank, and about 1 cup was recovered from the left wing (which was breached from impact). About 1 teaspoon of cloudy water was found in the airframe fuel filter bowl and the screen was partially blocked with debris. A review of the airplane’s fueling and flight records, including data from the onboard engine analyzer, revealed there would have been about 1 gallon of usable fuel onboard about the time of the loss of engine power.”

Other than lack of fuel, the NTSB found “no other mechanical deficiencies that would have precluded normal operation at the time of the accident, and the total loss of engine power was likely the result of fuel exhaustion.”

The report said that Graham “exceeded the airplane’s critical angle of attack (as evidenced by the low recorded ground speed during the final moments of the flight), which resulted in an aerodynamic stall/spin and loss of control.”

According to the Aircraft Owners and Pilots Association, recovering from a spin typically requires “about 1,200 feet of altitude, making a spin initiated at or below pattern altitude unrecoverable even with perfect technique.”

There was no evidence that drugs or alcohol contributed to the cause of the crash; however, Diazepam (Valium) was detected in Graham’s system in post-accident toxicology test. The FAA considers an open prescription for diazepam disqualifying for medical certification and states that pilots using Diazepam should not fly as it may “impair cognitive and psychomotor performance.”