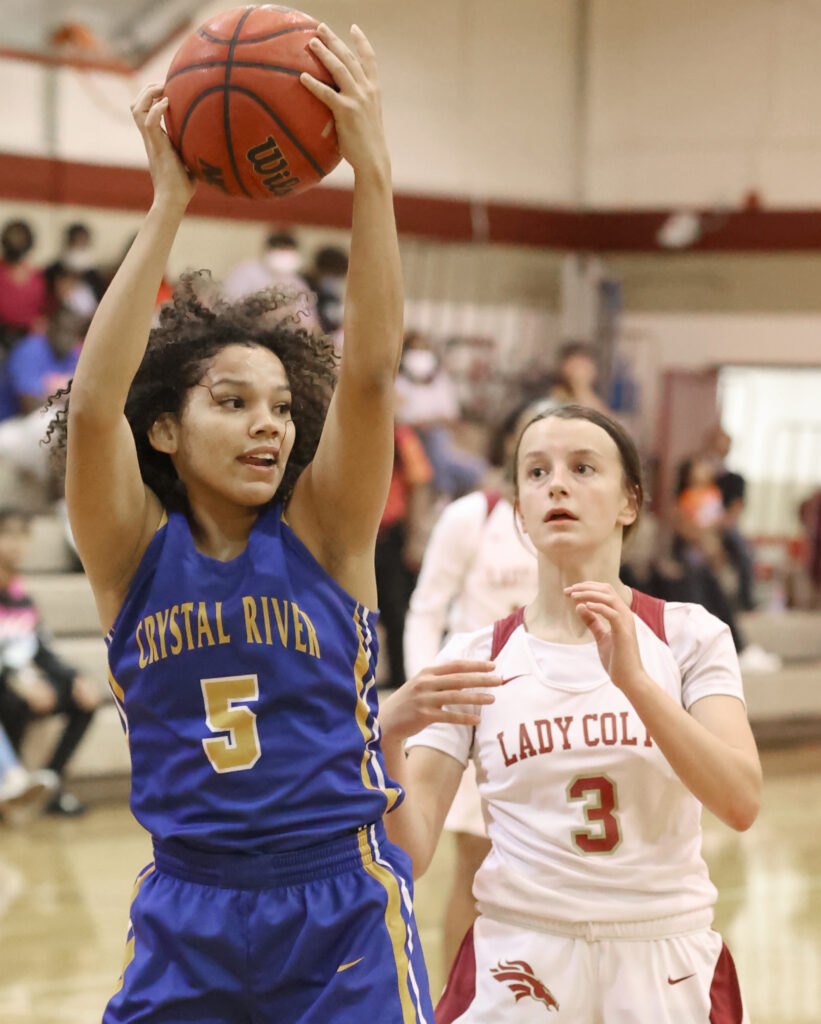 A season where North Marion repeated as district champions and won 14 of its last 15 games came to an abrupt end on Thursday night in the regional quarterfinals of the 4A state tournament.
Crystal River overwhelmed North Marion’s defense all night long, and the Colts were eliminated with a 62-56 loss. The Pirates’ 62 points were the most North Marion had allowed all season.
“We wanted this game to go one step further,” North Marion coach Stephanie Brown said. “They tried, they tried. I’m proud of them. I’m proud of them. It hurts, it hurts, but I’m proud of them.”
Both teams were off to a slow start, as the score stood at 3-0 for the first three minutes of the game. The first quarter was riddled with turnovers and missed opportunities, but a Brooke McConnell buzzer-beater put North Marion up 11-7 after one quarter of play.
But over the next two quarters, Crystal River’s offense came alive. The Pirates scored 23 points in the second quarter to lead 30-27 going into halftime. A 14-4 run to start the third quarter allowed Crystal River to pull away for good. In total, Crystal River racked up 41 points in the second and third quarters.
The Pirates were lethal from beyond the arc, sinking nine treys against the Colts. Senior Haley Herman led the way with five three-pointers and was the team leader in points with 21. Three Pirates had double-digit points.
North Marion managed to outscore Crystal River 20-14 in the final quarter of play, but the damage had already been done. The Colts’ D’hnia Williams and Erianna Williams both had double-digit point nights, but it was not enough to keep their season alive.
Crystal River faces The Villages in the next round on Tuesday.
“I got a young team, so we got a couple more years to try to make it past the hump right here,” Brown said. “But I’m proud of them, though, I’m proud of them.”