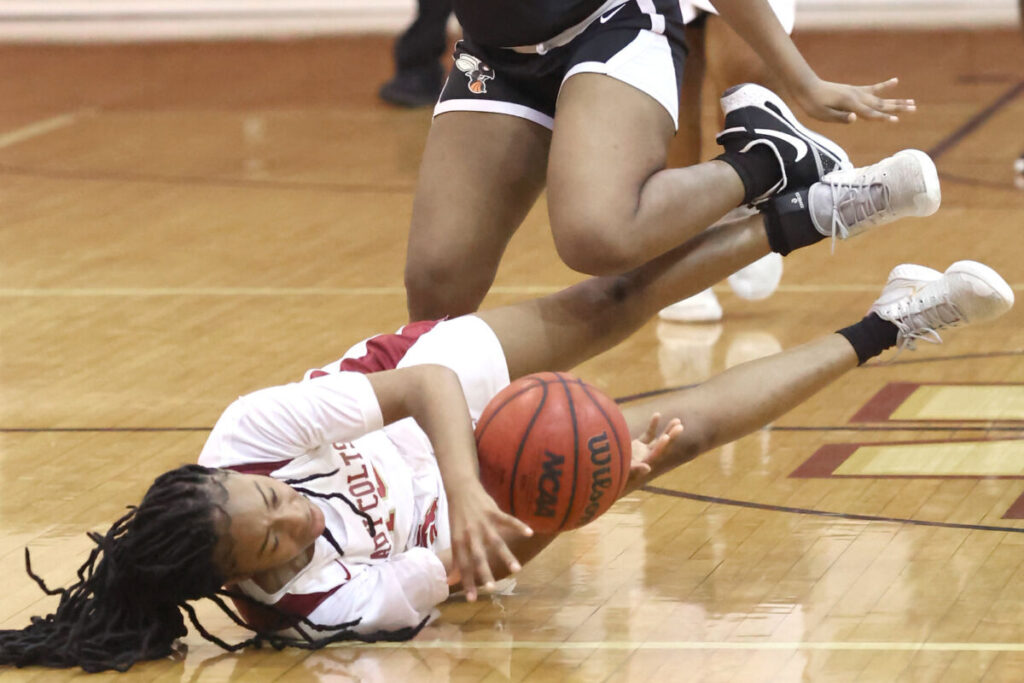 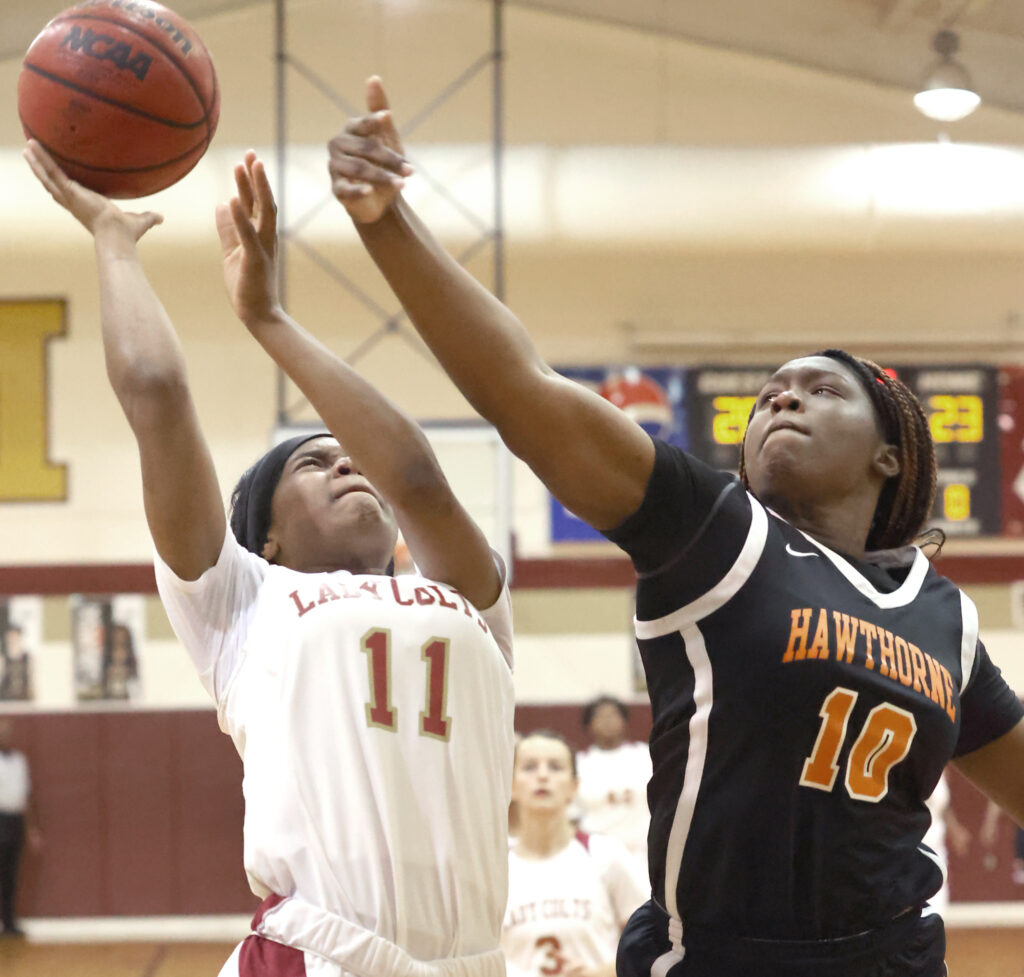 North Marion’s Erianna Williams (11) looks for a way to the basket as she is defended by Hawthorne’s Jazlyn Jackson (10) during a basketball game at North Marion High School in Sparr, Fla. on Monday, Jan. 25, 2021. Hawthorne won the game 47-36. [Bruce Ackerman/Ocala Gazette] 2021.

North Marion’s girls’ basketball team traded blow for blow for most of its game against defending 1A state champion Hawthorne on Tuesday night, but the Colts’ upset bid ultimately fell short in a 47-36 loss.  The Colts (14-4) hadn’t lost a game since a 56-27 loss to West Port on Dec. 15. A forfeit win against Forest on Dec. 16 kickstarted a 10-game winning streak before the loss to Hawthorne (14-4).

That’s when it started to unravel for North Marion.

With just a few seconds left in the first half, Hawthorne’s Jayla Williams was fouled while scoring and then buried a free throw to tie the game at 21. The ensuing North Marion inbound pass went flying out of bounds while the buzzer sounded. The referees reset the clock to 2.5 seconds and gave the ball back to Hawthorne.

North Marion then fouled Jaz’lyn Jackson as she attempted a buzzer-beating three-pointer. While the shot was unsuccessful, Jackson drained all three free throws as both teams headed to the locker room with Hawthorne leading 28-23.

The five-point swing was too much for North Marion to overcome, as Hawthorne never surrendered the lead after that. The Colts made it a three-point game with three minutes left in the third quarter, but Hawthorne outscored North Marion 13-5 for the rest of the game. 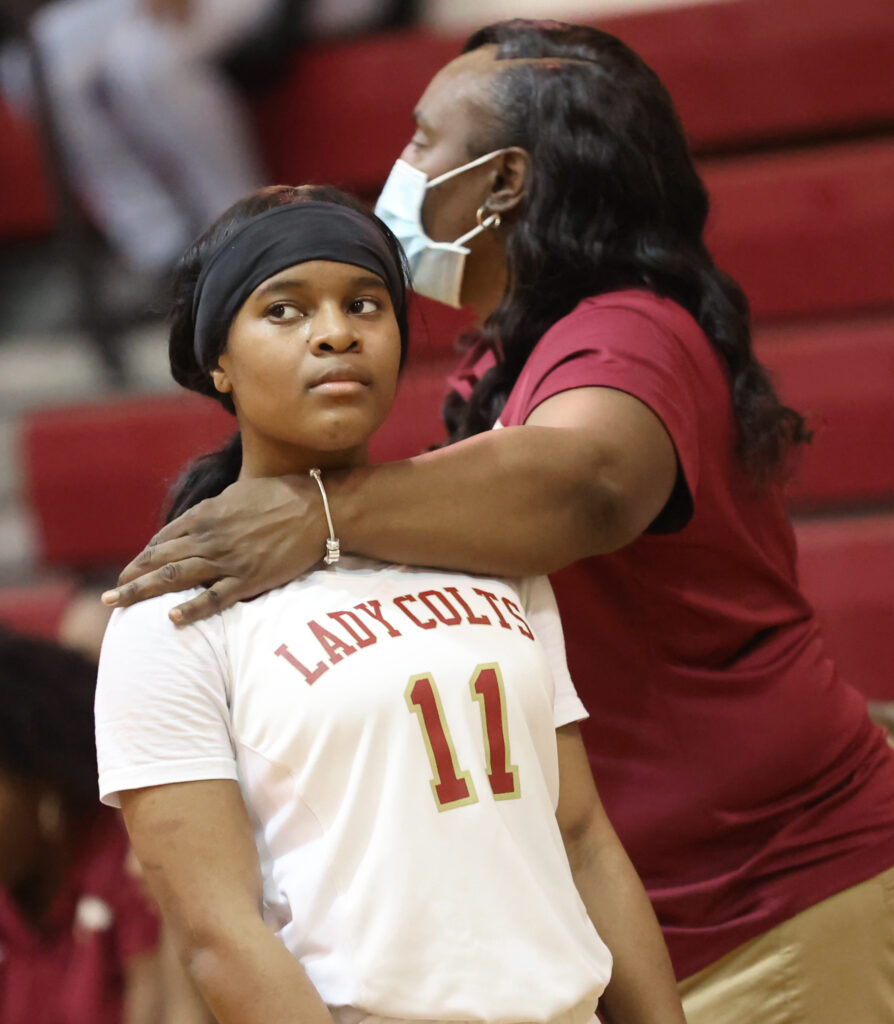 North Marion’s coach Stephanie Brown holds onto Erianna Williams (11) on the bench as they lose to Hawthorne during a basketball game at North Marion High School in Sparr, Fla. on Monday, Jan. 25, 2021. Hawthorne won the game 47-36. [Bruce Ackerman/Ocala Gazette] 2021

The Hornets’ defense was overwhelming, constantly swarming to the ball. Hawthorne’s defense forced turnover after turnover, and North Marion struggled at times to even get the ball into the attacking end of the court. Williams led Hawthorne in scoring and punished North Marion multiple times at the free-throw line, while D’nhia Johnson led the Colts’ offense.

“I told my girls just to keep their head up, saying they’re the defending state champs,” North Marion coach Stephanie Brown said. “We’re just getting prepared for next week for districts.”