Slowly the moon is rising out of the ruddy haze,
Divesting herself of her golden shift, and so
Emerging white and exquisite; and I in amaze
See in the sky before me, a woman I did not know
I loved, but there she goes and her beauty hurts my heart;
I follow her down the night, begging her not to depart. 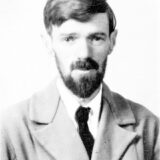