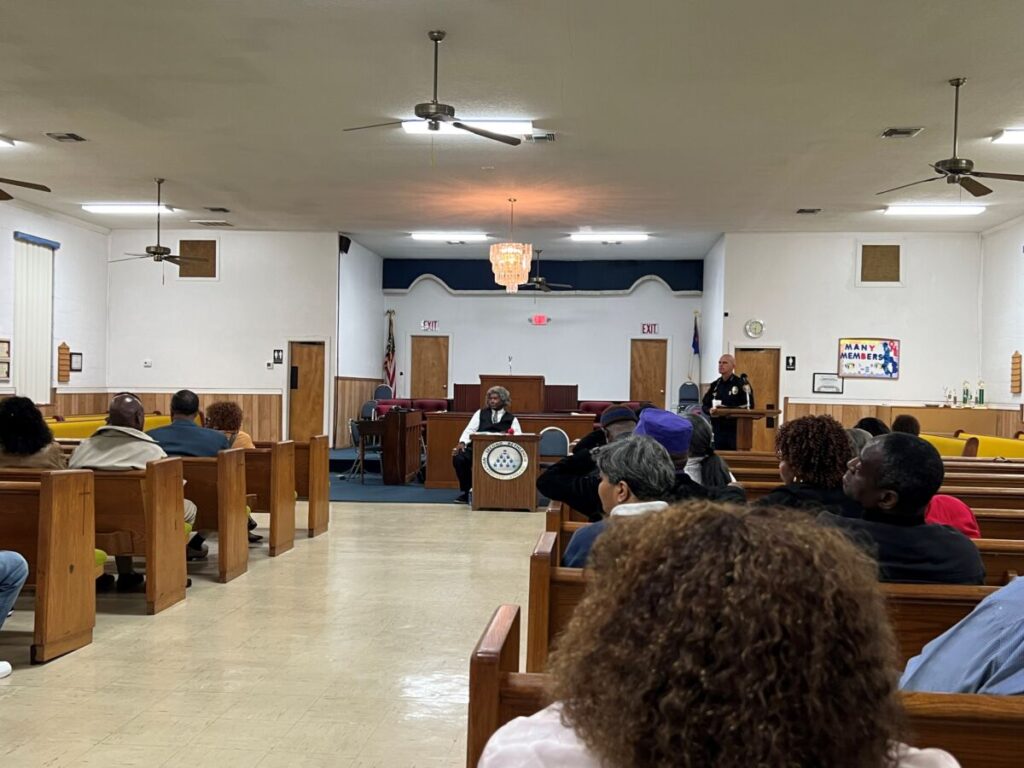 The town hall style meeting, called by the Marion County Chapter of the NAACP, follows a New Year’s Day shooting at Martin Luther King, Jr. Boulevard and Southwest Fourth Street, which claimed the lives of Davonta Harris, 30, and Abdul Hakeem Van Croskey, 24. Four other victims, whose names have not been released by authorities, were wounded.

No arrests have yet been announced in that case.

According to the Ocala Police Department, eight males died as a result of gun violence in the city last year.

Rev. Jerone Gamble, first vice president of the NAACP and director of the seminary, served as moderator.

“We’re here to make a difference in the survival of our young folks,’’ he said. “When there is a gun violence tragedy in our community, we gather to pray but then nothing happens. We must take specific action to protect the youth we have failed. We can do better than just talk.’’

Gamble mentioned a recent tragedy in Virginia in which a 6-year-old boy is accused of shooting his teacher and wondered how a youngster “can conceive and execute” such an attack.

Pointing to what he called a lack of cultural and arts background among young people, as well as broken homes and “kids out of control,” he said gun violence is a “public health” issue more so than just “folks getting shot.”

Many in the audience of roughly 80 people spoke up about the problem.

Audrey Bell, who operates Bridge to Hope transportation service, said growing up, she tried to “make her mother proud.”

“Where does all the anger come from (in young people) and why? What is the cause?” she said.

Bell said the community must look for “what is permanent and lasting” to help youth.

Pastor Victor Boynton of Calvary Missionary Baptist Church in Fairfield reminded the audience of a 16-year-old boy who was shot multiple times and left at a gravesite in Reddick in November, and 15-year-old member of his church who was also the victim of gun violence.

“This is a universal epidemic,’’ Boynton said. “We are disengaged with young people. We need to bring all the programs for youth under one umbrella agency. This is not a church issue, this is a community (and a) village issue.”

David said members of the community “need to start with themselves” and get help before reaching out to youth.

Balken added an “incredible opportunity to influence the cycle of violence” is often missed when shooting victims being treated in a hospital refuse to speak to authorities but could be approached by other members of the community.

He pointed out that gunshot victims may go on to use a gun in a violent crime themselves.

Balken said the New Year’s Day shootings investigation was “moving forward” but did not comment otherwise on the case. He added that the OPD tracks gun activity closely and “has prevented a tremendous amount of gun violence.”

Bishop Eric Lightsey of Draw All Men Ministries Church in Ocala suggested the community join with city leaders and invite help from the designers of the Duval County/Jacksonville anti-gang program, which he said caused a significant reduction in gang violence there.

“Gang affiliation tends to be based in geographic relationships and individuals ‘move-up’ through the ranks of the gang by engaging in violent crime” and “are not motivated by financial profit but instead by respect and protecting one’s reputation,” the report states.

Brian McIntosh, pastor of Old Ship of Zion Church near Reddick, said people should “get their blue jeans and get into the community and make a difference.”

“We have to go to the streets,” he said.

Dezmond Wheeler of Progress Requires Growth said he would like to see “actionable steps” in the community to involve youth in working with technology rather than just being users of technology.

Adrian Vereen said he’d like to see a “Scared Straight” prisoner narrative-type program brought into the local schools and more education about the “sophisticated” local gangs.

Dennis McFatten, director of the Safe Schools office for the Marion County school district, said he is compiling information on the local gangs including jargon and rules.

“There are a lot of gangs here,” he said.

Cain Davis of the community organization Strategic Community Alliance, Inc. called for more support for parents because the situation is “killing the Black community” when children are uncontrolled. He said often a youth with $6,000 or more illegally obtained monthly income is running the household.

Meeting participants offered opinions including the need for understanding the language of youth, mentoring, male role models and youth “have no one to talk to.”

Rev. Eric Cummings, pastor of the New Zion Missionary Baptist Church and a member of the Marion County School Board, decried the “reactionary” response to gun violence which then “dies down.”

Cummings, who is also a corrections officer, offered steps to take back neighborhoods, where he said especially elderly people often live in fear, including education, city and county involvement and “home-grown” youth support groups like a midnight basketball program.

The Marion County Children’s Alliance (MCAA) has community and youth programs already in place. Monica Bryant spoke about the organization’s programs including the Family Violence Prevention Task Force and its work in the community. She said a proposed gun violence task force would be a “new separate work group.”

She cited 13 deaths in Marion County last year as a result of domestic violence.

and about 100 children have been involved in a more recent program related to teens and gun violence.

Gamble feels a Gun Violence Task Force as proposed by Bryant could be “an ongoing support in the community to reduce and eliminate” gun violence.