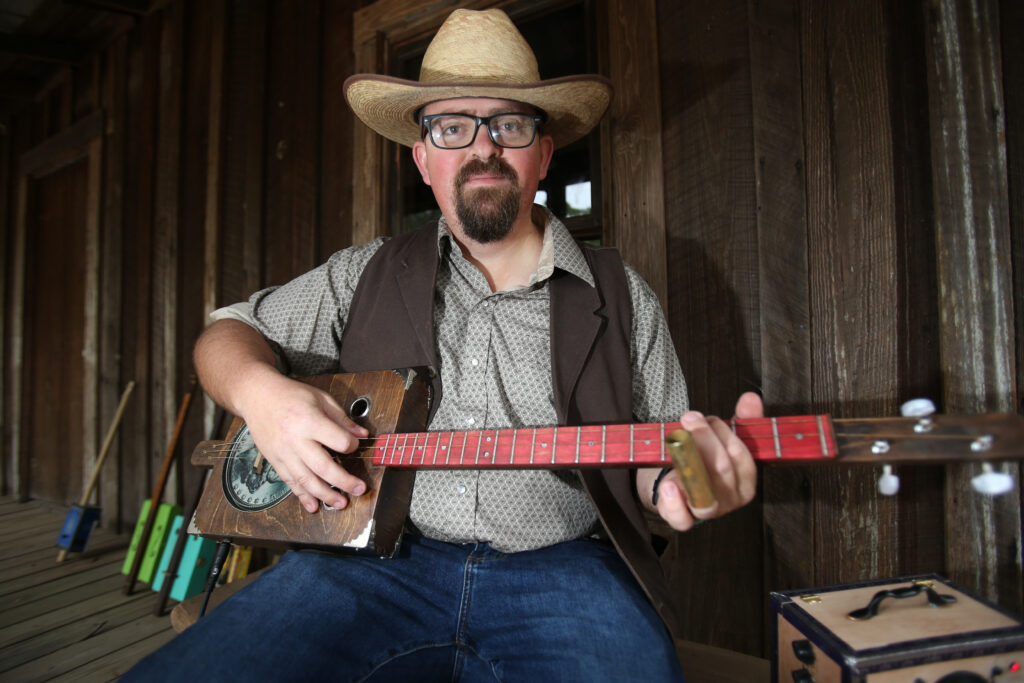 Andrew Nichols poses with some of the cigar box guitars he makes as he sits on the porch of one of the houses in the Cracker Village at the Silver River Museum in Silver Springs State Park on Jan. 12. The first cigar box instruments that were made date back to the 1840s. [Bruce Ackerman/Ocala Gazette]

Andrew Nichols poses with some of the cigar box guitars he makes as he sits on the porch of one of the houses in the Cracker Village at the Silver River Museum in Silver Springs State Park on Jan. 12. The first cigar box instruments that were made date back to the 1840s. [Bruce Ackerman/Ocala Gazette]

History buff Andrew Nichols crafts musical instruments the way his family did generations ago, and modern musicians are buying them as fast as he can turn them out.

The cigar box guitar maker grew up in Ocala hearing stories about family gatherings on the porch of his grandmother’s old farmhouse in Alabama.

“They were dirt poor,” he said. “They were living in a very rural area. Different family members played instruments they made. You had a washtub bass – it was like a broomstick and an old washtub. A kid had a jar that had some beans in it to shake it and keep a beat. Somebody would be playing a fiddle, and everyone would hang out on the porch and play music. That was their source of entertainment.”

“They all started out on cigar box guitars just like this,” Nichols said, holding up one of his handcrafted instruments. 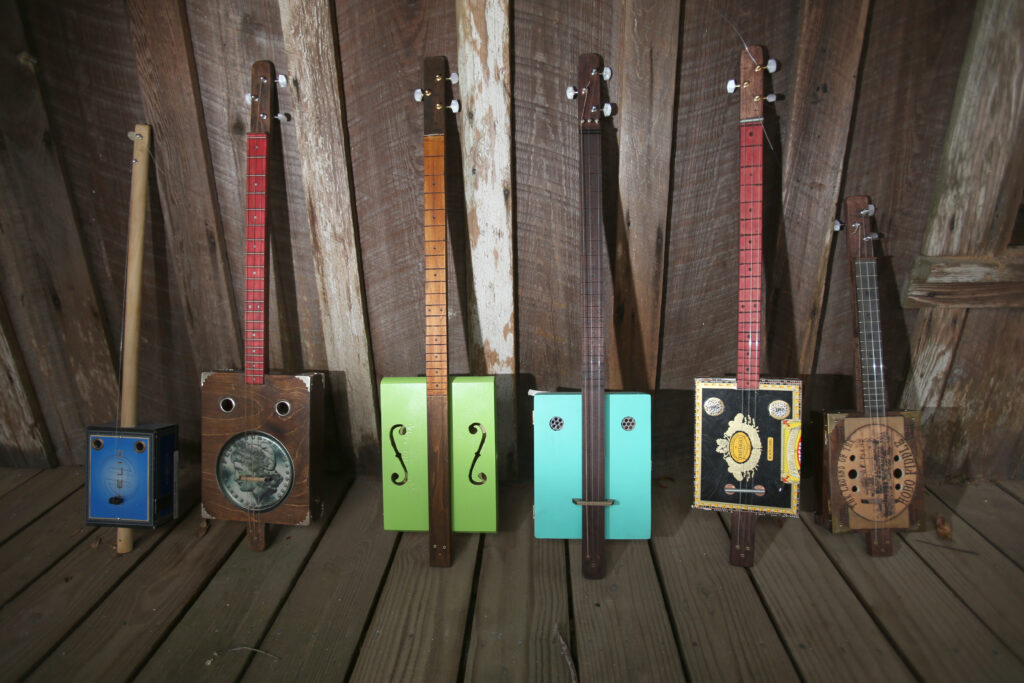 Some of the cigar box guitars made by Andrew Nichols are shown. [Bruce Ackerman/Ocala Gazette]

The 34-year-old Ocala park ranger learned woodworking from his grandfather.

“I’ve been building stuff since I was a little boy,” he explained, adding that he prefers to use hand tools rather than modern power tools.

“When I’m doing my woodworking, I’m using a straight draw blade,” he said. “I’ve got planes. I work a lot with an adze. I’ve got all the traditional woodworking tools.”

A few years ago, after seeing a drawing of a Civil War soldier playing a cigar box instrument, Nichols decided to buy a build-it-yourself kit. Building that first guitar, he knew he’d found a new hobby. And he quickly realized that, with a little ingenuity, he could upcycle the wooden cigar boxes stores often throw away, creatively using leftover paint and repurposing a few purchased or salvaged hardware items to create usable musical instruments.

His process starts with thumping the cigar box, “like a watermelon,” he explained. That helps him decide what would make a good resonator – often a paint can lid or metal dog or cat bowl. Other parts might include old cabinet hinges, shower drains, nails and pennies.

“If it looks cool and sounds good, I’m going to do it,” Nichols said. “I like taking something that someone were to throw away and make it a piece of art. I can’t go build a Stradivarius, but I can take a piece of junk and make it sound good.” 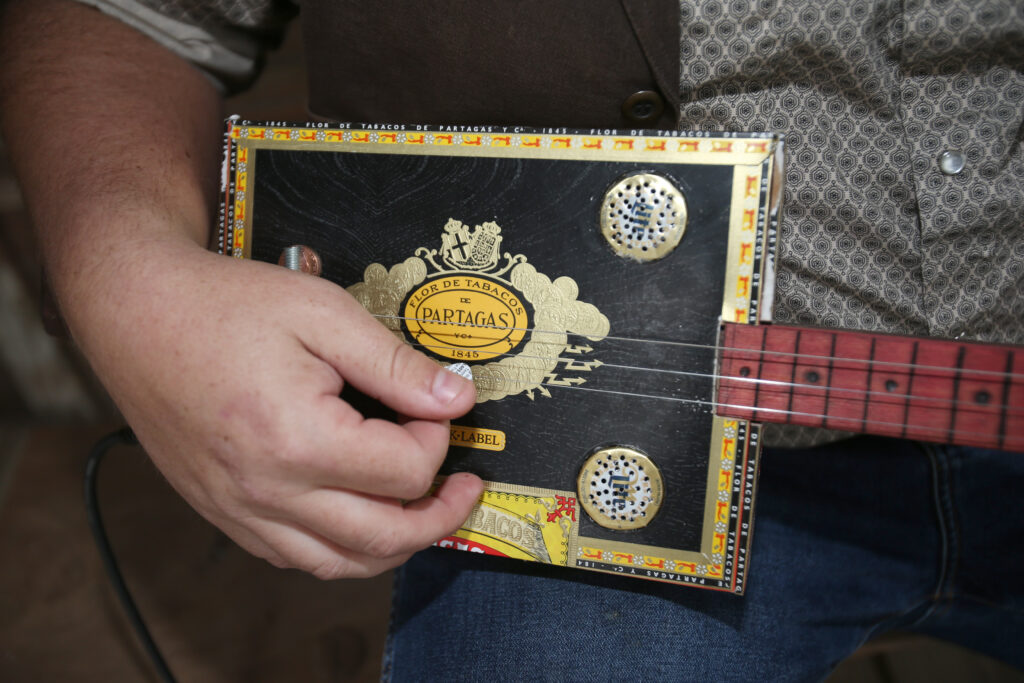 Andrew Nichols plays one of the cigar box guitars he made. [Bruce Ackerman/Ocala Gazette]

He wires the guitars for use with an electric amplifier to boost the raspy sound, which is reminiscent of old-time blues music.

“That’s how blues and bluegrass and a lot of those genres got started, was by doing exactly this,” he said.

As a reenactor for the Attack on Fort King, Ocali Days and other battle reenactments throughout the region, Nichols found a ready clientele of musicians who appreciated his traditional craftsmanship. His creations are period-appropriate for Civil War, Seminole War and even Revolutionary War reenactments, he explained.

The most satisfying part of his craft is when one of his guitars ends up in the hands of a talented musician.

“I hear it, and I just get chills. I’m like, ‘I made that, and they’re making it sound good,’” Nichols said. “People pick up a guitar, and their troubles go away.”