Also, why are the commissioners commandeering the crime prevention fund without the expertise to make those decisions? 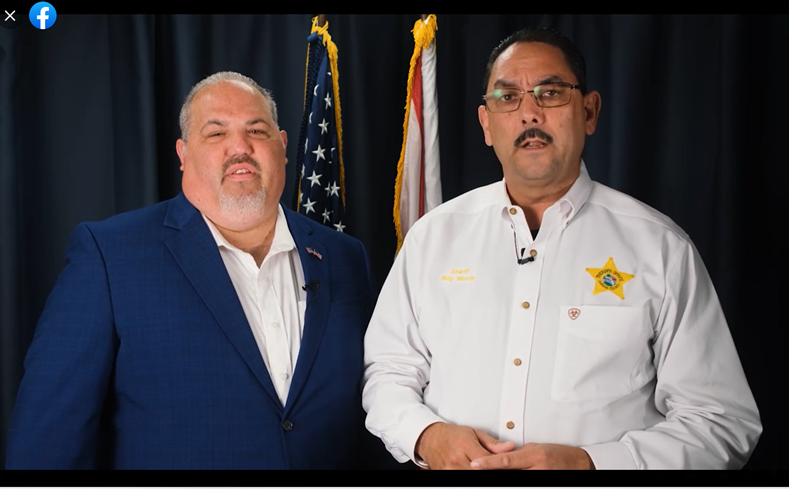 While no one would doubt the importance of the message, the timing of the ads–and their political implications during an election year–are questionable.

For starters, why is Zalak, an incumbent seeking re-election in the District 4 Republican primary on Aug. 23, getting such free, valuable face time in a video message that seems to imply a tacit endorsement from Marion County’s top law enforcement officer? The sheriff’s office, sensitive to the implications, said it will not be sharing the video for the time being to its 172,000 Facebook followers.

Public records indicate the video was produced outside the county’s normal media planning. In an emailed statement, Stacie Causey, spokesperson for Marion County, explained how the video came about.

“The need for this topic, protecting our community’s children while they’re online, was brought to the chairman and the sheriff by the faith-based community. As protecting our children is a top priority to our organizations, the chairman and sheriff met a nonprofit group referred by the faith-based community, Protect Our Children Project. This nonprofit group referenced Polk County Sheriff Grady Judd’s message from 2020 as one of their examples for how constitutional officers could increase awareness of this rapidly evolving danger to our community’s children.

“The chairman (Zalak) relayed the sheriff’s intention to join him (the chairman) in a video PSA that would be released before the start of the school year to (Marion County) Public Relations Director Bobbi Perez.’’

The sheriff’s office confirmed that the meeting with the nonprofit group, Zalak and members of county’s public information office who accompanied him, took place about a month ago and provided this explanation.

“The Board of County Commissioners recently requested to have the sheriff appear on a video about child safety. This video was produced by the County PIO and not the MCSO. The question was asked if this was considered an endorsement of a commissioner’s re-election campaign. While we do feature Sheriff Woods on his own social media in segments such as Wanted by Woods Wednesdays and other crime prevention topics, the video in question is not intended to be an endorsement of a campaign and, Sheriff Woods’ intention is only to promote a crime prevention message.”

Causey said county staff determines who will be in the videos based on the messages and the availability of the presenters.

“We incorporate the sheriff, commissioners, staff, and local actors,’’ she said. “For example, many of last year’s Litter Task Force PSAs were also part of the crime prevention campaign and involved the task force’s liaison, Commissioner (Craig) Curry.

Lt. Paul Bloom, public relations director for the sheriff’s office, gave another reason why the agency avoids using elected officials in its PSAs: It gives the videos an expiration date, meaning when the officials no longer are in office. “We have [PSA] videos produced three years ago that are still relevant and usable today. Had we used elected officials in them, that wouldn’t be the case,” he said.

The county receives money for crime prevention efforts each year through a special fund, explained Causey.

Causey said county staff produced the video and money from the crime prevention fund was not used to produce the video or boost views of it.

When it comes to how this fund should be utilized, public records show the county and sheriff’s office have the county have differed in opinion.

In a July 13 email, Woods expressed concerns about the qualifications of those at the county who seem to be the sole deciders about how money collected in the special fund for crime prevention is allocated.

“I understand that this was an issue with a previous administration,’’ he wrote. “I do not believe or think/support that a non-law enforcement entity should have any vote, say, input or direction as to the spending of any crime prevention funding.”

The “issue with a previous administration” referred to former Marion County Sheriff Chris Blair who used money from the crime prevention fund to publish his photo across various media, which drew criticism from the commissioners and the public.

“Simply put, it is not their expertise or job,’’ Woods wrote. “I personally (would) rather keep my hands off of your decisions on the spending, but I will work with the commissioners on occasion to help get certain messages out on media platforms or have my staff provide input because they are the experts.’’

Woods noted that he recently was asked about his spending decisions, and it was implied that he should have used some of the funds instead to pay for an additional deputy.

“When my staff presented to the board a couple years back to use the crime prevention funding to add a deputy crime prevention position–by law it can be done–it was a no. This position would not have come out of my (special taxing unit) or the general fund. Now, that would have given me not just another deputy but a position that would be actually doing proactive stuff to prevent crime in this county. I am not upset or mad, I am just letting you know where I stand,” wrote Woods.

The county indicated that Zalak has been the county commission liaison for this fund since about 2015.

Referencing Fla. Stat 106.15(3), Candidate & Campaign Treasurer Handbook states gives the following prohibition: “A candidate may not, in the furtherance of their candidacy for nomination or election to public office in any election, use the services of any state, county, municipal, or district officer or employee of the state during working hours.”