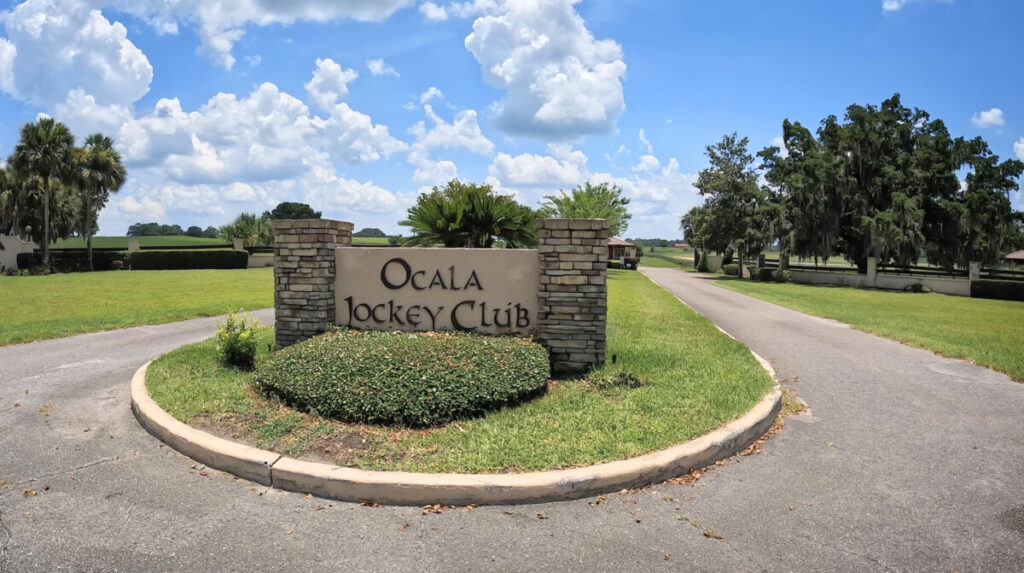 Several adjacent or nearby landowners and a group dedicated to preserving the area’s rural farmland have filed an appeal challenging Marion County’s recent approval of a rezoning request by the developers of the WEC (World Equestrian Center) Jockey Club.

Several of the parties have also filed a request for a formal administrative hearing disputing the county commission’s adoption of amendments to its Comprehensive Plan, which allowed the rezoning.

The challenges were filed July 20 in the Fifth Judicial Circuit Court in Marion County.

“We are seeking judicial review on the rezoning, based on records, the county staff report recommending denial and an expert witness,” said attorney Ralf Brookes, who is representing the petitioners in both cases.

“The administrative hearing request is because the Comprehensive Plan amendments were not supported by data or analysis,” he said.

In a controversial move, the Marion County Board of County Commissioners in a 3-to-2 vote June 21 approved Golden Ocala Equestrian Land LLC.’s application for a Planned Unit Development (PUD) on the 1,029-acre site, located on County Road 318 in Reddick in rural northwest Marion County.

Just before that decisive vote, commissioners adopted the Comprehensive Plan changes – a future land use map amendment and associated text amendment – which then allowed them to vote on the application.

The yes votes took place over the objections of county staff, which recommended denial of both the amendments and rezoning and multitudes of residents who vehemently opposed the proposed development, due to its location within the county’s Farmland Preservation Area (FPA) and because it included 120,000-square-feet of commercial development, among other reasons.

During the meeting, county staff, led by senior planner Chris Rison, cited several grounds for its denial recommendation including that the plans were not consistent with the county’s Comprehensive Plan, would adversely affect the public interest, and would not be compatible with the surrounding uses.

In the appeal petition, plaintiffs Damian and Rebecca Guthrie, Save Our Rural Areas, Inc. (SORA), Don Love, Michael and Jacki Robinson, Jennifer Hale and Karen Courchaine allege the approval of the rezoning application by the county “violates the essential requirements of law,” due to double and triple dipping of development density and intensity.

According to the county’s planning staff, the petition states, the residential density (units) and commercial intensity (square footage) were calculated from the same portion of the property (double-dipping) that had already transferred residential density to an existing condominium on the Ocala Jockey Club property that was approved a few years ago (i.e., “triple dipping’) – hence the planning staff recommendation for denial.

“They (Golden Ocala) are taking the same piece of land and using it three times; once for the townhomes already there, another for the proposed home sites, and another for the commercial development,” said Brookes.

According to the petition for writ of certiorari and the administrative hearing requests, the individual petitioners’ properties are all within 1,000 feet of the WEC Jockey Club property and all would be adversely affected by the proposed development. The Guthries’ farm of roughly 22 acres is directly adjacent to it.

The judicial review request also alleges the commissioners ignored the proposed development’s density, compatibility, and environmental issues yet to be determined, as well as traffic-related issues and the costs associated with upgrading local roads and Interstate 75, “all of which Golden Ocala has not yet agreed to pay a specific amount (as their proportionate fair monetary share for improvements) to date.”

According to a traffic study conducted as part of the county’s review of the project, total road improvements would cost more than $60 million, with the developers footing most of the cost, but not all.  The project would entail improvements to the 1960s era -I-75  interchange, as well as widening County Road 318, which would likely require the use of eminent domain, which allows a government entity or an agent to obtain private property for public use, with compensation.

A writ of certiorari is essentially a legal filing that asks a Circuit Court to review the legality and sufficiency of a local government action, while a formal administrative hearing furnishes a timely trial and resolution platform for disputes between private citizens and organizations, and state agencies.

During the June 21 meeting, Brookes spoke out against the proposed development on behalf of several of the petitioners, as well as SORA, as did expert planner Daryl Max Forgey. 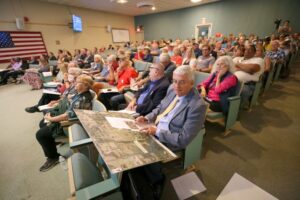 Ralf Brookes, an attorney for the opposition to the WEC Jockey Club, front, works on making notes over a large satellite map as the auditorium was filled to capacity at 235, mostly with people opposed to the project, during the Marion County Commission meeting on the WEC Jockey Club development at the McPherson Governmental Complex in Ocala, Fla. on Tuesday, June 21, 2022. [Bruce Ackerman/Ocala Gazette] 2022.

Damian Guthrie also spoke during the June meeting, saying: “I guess all we ever wanted was a seat at the table, but I just feel that neighboring properties and adjoining property owners were never really given an opportunity to sit down with the applicant.”

The petition asks for a “final order granting the writ of certiorari quashing the decision, and such other relief as this court deems just and proper.”

Golden Ocala’s attorney, Jimmy Gooding, through an employee who answered the phone at his office, said he had, “no comment,” on the filings.

As for the administrative hearing request, the petitioners – the Guthries, Love and Save Our Rural Lands, Inc., – also contend the comprehensive plan amendment is “not in compliance” because it is internally inconsistent, and does not address the potential impacts on the Rainbow Springs Group Basin watershed.

The amendment also lacks meaningful and predictable standards to guide future development and is urban sprawl “leapfrog” development that is not supported by services including potable water, sewer, and transportation infrastructure, the legal filing alleges.

It also mentions the county staff’s report on the rezoning application, which states, “Increasing opportunities for urban and commercial activities in the Rural Area makes delineating the separation of Rural and Urban Areas difficult. Such difficulties make efforts to support and retain Rural areas and rural character increasingly difficult leading to increasing urban sprawl as urban uses encroach into and proliferate in Rural Areas.”

The administrative hearing request also alleges Golden Ocala has not reacted appropriately to concerns or comments raised by several state agencies that reviewed the county’s comprehensive plan amendment as required, including the aforementioned Rainbow Springs, the existence of federally protected or threatened or state protected wildlife species on the property and the many cultural resources in the general vicinity of the WEC Jockey Club, including multiple attempts to locate a potential historic site known as Fort Drane, thought to contain human remains.

Don Love said the majority of the group represented by Brookes is not against the WEC Jockey Club development overall, but do oppose the 94 homes that will be constructed on the property as well as the commercial aspects of it.

“Most of us are not against the Ocala Jockey Club turning into another World Equestrian Center,” he said. “But one of the things that were frustrating to all of us is the three-acre homesites that will be allowed there.

“They (the county) are not holding to the farmland preservation rule that only allows one home per 10 acres; that’s the biggest thing,” said Love. If the commercial space was off the table, he’d be more supportive of the project, too, he added.

Love said he and others residents are concerned about the Roberts family buying up so much property near the former Ocala Jockey Club site.

“My wife said they are gonna have to change the name of Ocala to Robertsville,” he said.