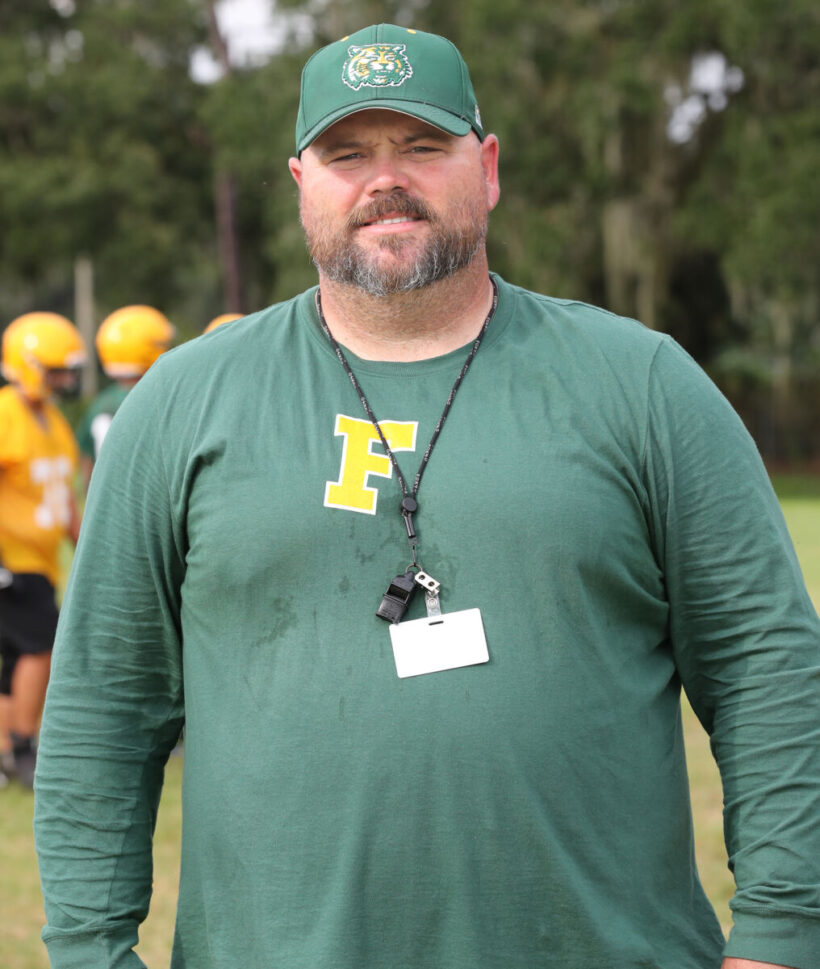 Eoghan Cullen, the new head football coach for the Forest Wildcats, on the field at Forest High School in Ocala on Wednesday, August 17, 2022. [Bruce Ackerman/Ocala Gazette] 2022.

For Eoghan Cullen, returning to Forest High School was an unexpected homecoming that he and his family gladly welcomed.

“The Forest job came available, and it was like almost home for me because this is where I started (as a coach) and the relationships we had with people on campus,” he said.

Cullen returns to the school after being the head coach of Lake Weir High School the past two seasons. He began his coaching career as an assistant at Forest from 2017 to 2019 before moving on to Lake Weir. Cullen is well-traveled and has lived in many different places. To appreciate his journey, you have to go back to the beginning.

Cullen’s parents, William and Frances, came to America from Ireland in 1979 looking to start a new life. “They were hard workers, and they never missed a day of work,” he said. He is the third of four sons and was born in Miami.

The Wildcats’ head coach was raised in Lakeland, a football-crazed town, but he grew up loving the sport of soccer because of the passion his home country has for the sport and because his father was on the Irish national team.

Cullen, 42, would pick up American football during his freshman year of high school after receiving a red card for being too physical during a soccer match. His father recommended he stick to American football, he said. Fortunately, he got to play for one of the powerhouse high school football programs in Florida, the Lakeland Dreadnaughts, and won a state championship in 1996.

Soon after his high school graduation, Cullen joined the Army at 17 years old. Over the course of his 17-year career in the military as an infantryman, he did two tours in Iraq and one in Afghanistan. The military gave him the opportunity to see the world and he lived in Fort Benning and Fort Stewart in Georgia, Fort Carson in Colorado, Fort Drum in New York and in Baghdad. He would have to medically retire in 2014.

Cullen said many of the lessons he learned in the military he applies to his coaching, particularly discipline and accountability.

He added, “There are no shortcuts. You have to prepare mentally, physically and you have to practice before going into battle on a Friday night.”

After retiring from the military, Cullen landed a sales job at the Sherwin-Williams paint company. His performance was good, but he said something was missing and that sales was not his calling.

While working his sales job, Cullen was coaching Little League baseball. Greg Ramputi, a student services manager at Vanguard High School, recommended that he get a college degree and start coaching at the high school level. Cullen earned his bachelor’s degree in science with a focus on biology from Florida Southern University in 2007. After graduating from college, Cullen joined Skip Austin’s staff at Forest to begin his coaching career.

According to Cullen, it was a family decision to move from Lake Weir to Forest, and it has worked out for the entire family. Cullen and his wife, Stephanie, have been married for 20 years and he is thankful for her and their children’s support.

“My wife has always been my biggest supporter, even in the military,’’ he said. “For us to have to move every two to three years is always a challenge, but it was something we got used to and she was very supportive. She brought in lunch for all my coaches yesterday and she’s at every game. Sometimes I can be down or frustrated about something and she’s always the voice of reason.”

Parenthood forces adults to step up and become people who their children can look up to, and Cullen has always been aware of his duty as a father of four. His two daughters, Fionnula and Niamh, and two sons, Oisin and Deaglan, have been huge supporters of his career. Oison is a sophomore offensive and defensive lineman on the 2022 team.

“I’ve always wanted to have my kids catch me in the act of doing something great or doing something good for others. I just try and teach my kids that it’s not about us because we, as people, are naturally selfish. We desire to get things for ourselves and do things for ourselves, but coaching and serving others is so much more than that. Serving others is so gratifying and to help other people is one of the greatest things you can do as a human being,” Cullen said.

The first-year head coach will have his work cut out for him at Forest, where the team has won three games a season for the past three years and has not had a winning record since 2017.

Cullen said he already has noticed buy-in from the players.

“I learned quickly that they were hungry for some type of regimen,’’ he said. “They were hungry for discipline, and they wanted to be pushed. The kids were looking for something different and based on our numbers over the summer, they were all in for a change to the program.”

Summer workouts began at 7 a.m., which can be difficult to appeal to teenagers who are relaxing and enjoying their summer break from school. Cullen made sure to create a program that did not make the student-athletes feel like it was a job.

“We didn’t want it to feel methodical or get stale. You got to continue to be creative and continue to show the kids that there are things they can see and can be proven. We moved the strength board in our weight room down to where it was visible for the kids to see every day. They can set goals for themselves, and we talked a lot about team goals and what we want to do this year,” Cullen said.

Goals have a wide range because it can be wins or GPAs or not missing a day of school. Cullen is looking forward to the off-field development and progression from his players this year.

“A 100% graduation rate for everybody that plays on the team,’’ he said, citing one goal. “I’ve got to charge the kids with being role models on campus for other students to look at and say they are balancing football, academics and they are still achieving.”

He added, “We want every kid to get their GPA up to a 3.0 and we have conversations with them about what the transition (after high school) looks like. Are you going to college? Are you going into the workforce or military? So, it’s more than football. It’s about getting these kids ready for the next phase of life.”

So many people look back on life when they are older and if they played sports, they would remember how influential their coaches were on their life beyond the field, court or arena. Cullen wants to leave a lasting impact that sets the foundation for the teens to become productive adults in society and have a happy life.

“I just want them to know they are loved,’’ he said. “If they put their mind to something and they work hard enough to do it, they can achieve it, and nobody can stop them. I tell them every day that their toughest opponent is the person who’s looking back at them in the mirror.”