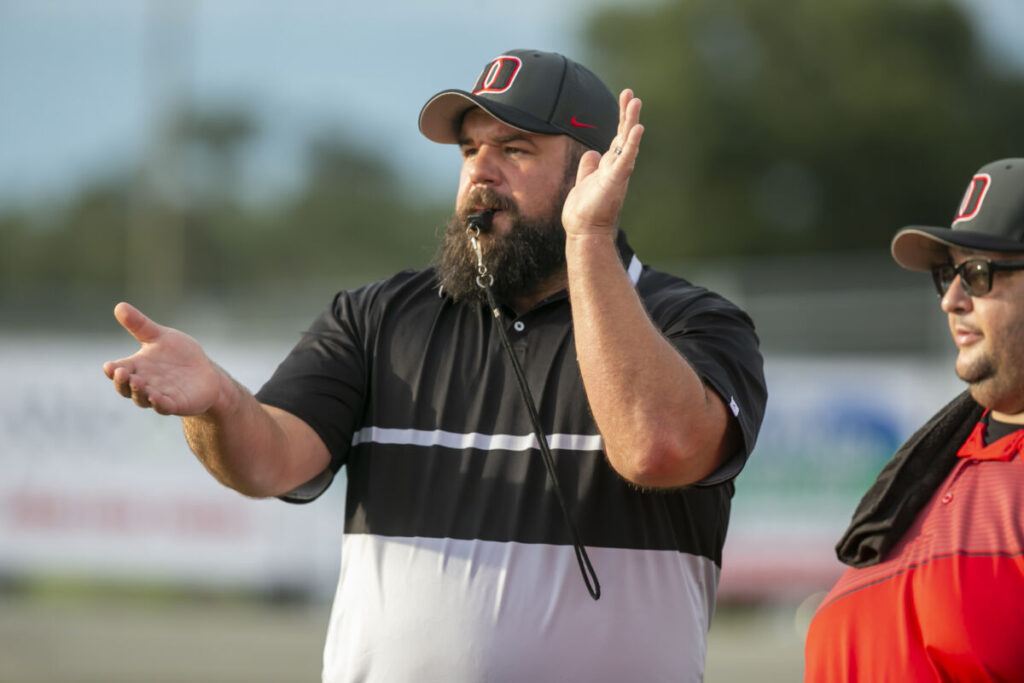 Thomas Sutton may have been born in St. Petersburg, but his heart and soul are planted firmly in Dunnellon.

Sutton and his family moved to Dunnellon when he was 5 years old, and since then he has grown into a community leader as a teacher and a football coach. When Price Harris, the former head coach of the Dunnellon High School Tigers, left to take the same position at Madison County in March, Sutton took over as the head man in charge on an interim basis. After the spring, Sutton was officially offered the job.

“I was excited about it, but you feel the weight of the responsibility,’’ Sutton said. “It’s a lot different walking through Walmart as the head coach as opposed to the offensive line coach.”

Sutton started playing football for the Dunnellon team in the Marion County Youth Football League in fourth grade and stayed with the team until eighth grade. Sutton played on varsity all four years of his high school career before graduating in 2005. In 2008, Sutton earned his bachelor’s degree in criminal justice from St. Leo University. During that time, Sutton began his coaching career at his alma mater and stayed on staff as an assistant from 2007 to 2014.

The biggest lesson from his playing days is part of his personality and mentality as an adult.

“Just being able to deal with adversity. In football, you’re going to win or lose a battle every single play. Just getting back up to the line and getting ready for the next play, that’s just like life. Adversity is going to hit, and you have to keep moving forward,” he said.

Sutton went on to be the assistant head coach and offensive coordinator at Chiefland High School in 2015 and 2016 before returning home to Dunnellon, where he has was an assistant coach since 2017.

It was a long time coming for Sutton to receive this opportunity, and he feels it’s the perfect fit for him.

“This is the only head coaching job I would have said yes to. Just to be in my hometown. A lot of these kids who are on the team, I played with some of their brothers and we’re getting to the point now where a couple of guys I played with have sons coming up through the system,” he said.

“Just being a lifelong community member and knowing how this town operates and what they expect is a huge reason why I said yes,” Sutton added.

The continuity and comfortability of being with the players for years has made the transition seamless, according to Sutton.

“I’ve been here for so long, and the previous head coach left the program in phenomenal shape, he did a great job,” he said.

The change in position has forced Sutton to pay attention to more each day, and he is taking it in stride.

“Just stepping back and looking at the big picture every day. The spring was good for me to be able to take over and personally be able to work through everything. It gets better and better every day,” he added.

Sutton is a different case when it comes to being a new head coach because of his long tenure at the school and living in the city. Not many new head coaches have the level of knowledge about their surroundings as he does, and he said knowing the people around him is a big part of it.

“It’s the relationships, being here so long. Ned Love field is the name of our field, and his son, Randy, coached me in youth football for five years,” he said. “It’s emotional thinking about it. I’ve dreamed about that first time under the lights on a Friday night leading the team out there for a long, long time.”

Sutton, 35, said he wouldn’t be here without the support of his wife, Allison, and his two sons, Thomas and Jackson. “My wife is unbelievable, she’s always that support system that I can vent to, good and bad. Having her as that rock at home is huge for me and my two sons are my whole world. Having my kids has been life-changing in the best way,” he said.

Being a coach for so long has taught him lessons in life that can be applied to parenting and coaching.

“Patience, having a 2-year-old running everywhere and getting into everything and a 5-month-old with changing diapers, you have to have patience for that. Coaching all these years has definitely helped me with that,” he said.

Sutton is eager to get the season started and talked about the goals for his program entering his first year.

“The goal here is to just always put out a hard-nosed, blue-collar product on the field, in the community and in the classroom,’’ he said. “Throughout the years, I’ve seen hundreds of kids come and go and it happens in every town, but some of those kids who were phenomenal athletes on the football field didn’t do the right things in the classroom or community.”

He continued; “Opportunities may have slipped through their hands, and so we’re really trying to change that. I’ve put some things in place, and I have some academic support on the football staff and a couple of people who check on grades weekly.”

Sutton mentioned several coaches who have had a big impact on his career.

“Price Harris, I learned a ton from that guy.,” he said. Frank Beasley, the first head coach who Sutton worked for at Dunnellon is a mentor he learned a lot from and keeps his advice in mind. Eric Richardson, who is on Sutton’s staff at Dunnellon, is another influential person who he said   has helped him over the years.

There is one piece of advice that sticks with Sutton to this day: Be yourself.

“I’ve taken things from all of them,’’ he said, “and they have told me to just be true to myself. You can’t be somebody else, you have to be yourself.”

At the end of the day, what happens on the field will just become memories. Sutton wants to leave a lasting impact on the players he coaches.

“Just make them better husbands and fathers,’’ he said. “That will always be the goal, hopefully they can take something from me and what we preach here daily and apply it to their lives going forward.”