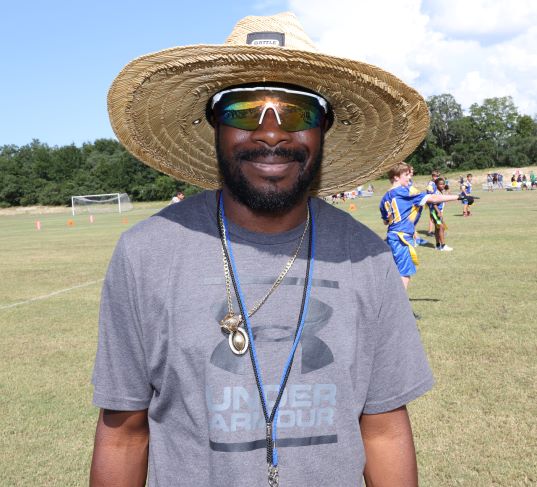 Daniel McLeod, the new football coach at St. John Lutheran School, poses for a photo on the field at Meadowbrook Academy in Ocala, Fla. on Tuesday, Sept. 6, 2022. [Bruce Ackerman/Ocala Gazette] 2022.

Daniel McLeod knew from an early age that sports can be an avenue that gives people opportunities to see the world and forge their own path in life.

The Miami native began playing football and baseball as a child, but football quickly became his favorite sport. “Football was the first sport I fell in love with,’’ he said. “My uncle was a coach and my cousin played youth football, it was just a sport we naturally gravitated to.”

McLeod, 37, grew up in a single-parent household and had to learn how to deal with hardships at an early age. But he credits his mother for taking care of him and being a role model to follow. Football over everything else taught him many life lessons that he carries to this day, he said.

“Football is one of the greatest teachers in life. It teaches you how to handle adversity and teaches you how to be a stand-up person. The thing I loved about it is that it taught me to pay attention to the details of life,” he said.

McLeod went on to play football, baseball and bowling at Miami Carol City Senior High School, one of the powerhouse high school football programs in south Florida. After graduating from high school in 2003, he enrolled at Tuskegee University in Alabama to play football and baseball. Unfortunately, during his freshman season, McLeod’s mother passed away and he had to step away from everything to come back home and take care of his family.

The traumatic event was life-changing, but it may have been a blessing in disguise for McLeod because he said it opened new doors and opportunities for his life.

“I got blessed with the opportunity to coach and stay in the game,’’ he said. “I started coaching (football) with my uncle and the more I got into it, the more I realized I had a knack for it and started to make way with the kids, and that’s when coaching took over my life.”

McLeod began his coaching career in 2004 at an alternative school in Miami and stuck around until 2009 before moving to the Tampa Bay area to be the offensive coordinator and running backs coach at Gaither High School. In 2010, McLeod earned his bachelor’s degree in business administration from Columbia Southern University. After Gaither, McLeod worked as an assistant at Waldorf University in Iowa and later as offensive coordinator at Pasco High School.

McLeod landed his first head coaching job at Gulf High School in Pasco County, a position he held for a year before moving on to be the head coach and assistant athletic director at World of Knowledge in Pasco County. The private school closed during its first year of athletics, and McLeod was faced with adversity once again.

Fortunately, during the process of notifying other schools within the Sunshine State Athletic Conference of the impending closing, McLeod was told of an open head coach position at St. John Lutheran School in Ocala. He was hired as athletic director and head football coach in April, and he’s ecstatic about a fresh start in a new town.

“It’s been a great transition. I love the people here and their support is amazing,’’ he said. “The program has so much history and the athletics have been around forever. They had a great athletic director prior to me and once they offered me the position, we started talking about taking it to the next level.”

McLeod was put into go mode as soon as he was hired; he had six days of practice to prepare his new team for a spring scrimmage against Ocala Christian Academy. McLeod immediately saw the enthusiasm of his players.

“From the first day, they bought in to what we’re trying to build and what I want to build as my vision for the program,” he said.

He added, “The kids are great, and I noticed right away that they were willing to work hard and listen, they just needed structure. They needed the discipline and details of the game, and we laid the foundation during those first six days. We have continued to build on that over the summer, and it’s paying off right now.”

The vision for an athletic program can be murky at times for any coach, but McLeod was clear with his intentions.

“We just believe in hard work, dedication and attention to details. Our school shield has four edges, we label those as foundation, culture, pride and passion. As we’ve been working throughout the spring and summer, we worked on discipline and quality work ethic. That has gotten us to where we are now, starting to understand the details and taking pride in the culture,” he said.

McLeod has two daughters, Keimari and Gia, who attend St. John’s middle and elementary schools. Keimari is on the middle school volleyball team and Gia is into gymnastics. His daughters being involved and enjoying sports brings a smile to his face.

“It does my heart well; it brings me a lot of joy,’’ he said. “It’s what my mom and me did, we both played sports and that’s what we’re about. It’s just nice to see the kids following in your footsteps.”

Any coach at the youth or high school level can be a lifelong mentor for those under their tutelage. McLeod said he wants to leave a lasting impact that teaches his players to be good people on and off the field.

“We can say we were the greatest football players and greatest student-athletes, but at the end of the day, I just want them to become great men. Your tombstone at the end of the day should read ‘a great man,’ meaning you did everything the right way, you were a productive citizen in the community and you did everything the way you were supposed to do with discipline, structure and attention to detail.”