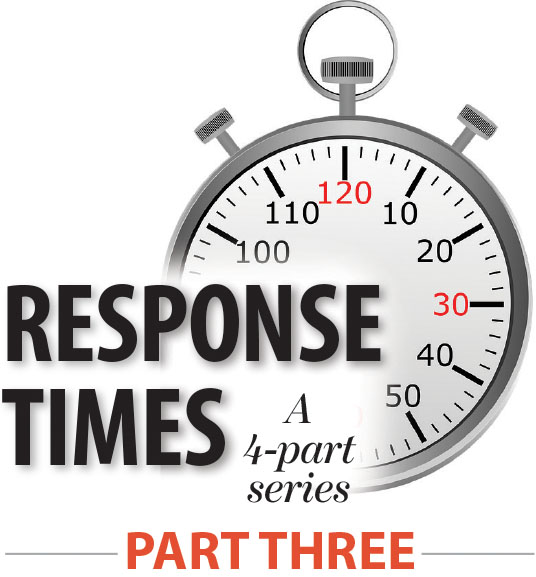 Despite an annual jump of almost 12,000 calls within the last five years, the call response times of Marion County Fire Rescue (MCFR) did not substantially increase.

Marion County Fire Rescue Deputy Chief of Operations Robert Graff pointed out there are multiple ways to assess response times, and each portion of an emergency call can be evaluated, from when someone dials 9-1-1 until a unit arrives on the scene.

Once MCFR has assessed their times according to the 90% percentile standard, they are then able to hone in on where issues affecting call times might originate, Graff said. From there, they can begin the process of looking into where changes can be made.

When measuring efficacy and determining if call times are acceptable and within the 90% standard, there are numerous components that need to be taken into account, according to Graff.

“There’s a bunch of different facets that going into it [measuring efficacy],” he says. “First off, you look at how your resources are distributed. Are your fire stations in the right place? Do they cover the territory appropriately?”

Once an analysis determines the coverage is adequate, the next step is to look at the assets each station on hand.

“From the coverage, you look at the concentration. Do you have enough resources inside the fire station? And then you can determine the number of resources inside a fire station and whether or not you have the concentration correct, because if you have calls operating at the same time then you can answer two calls coming in at the same time from the same station concurrently,” Graff says.

“It’s actually a pretty scientific process once you sit down and look at the system as a whole, and the reasons why maybe you’re meeting or not meeting your response time,” he says.

“You can usually dial it in and say, ‘hey look, we didn’t have a unit available because they were busy in somebody else’s zone’, which requires additional resources when that starts happening more often.”

Having units respond outside their zone sometimes is a necessity when call volumes are high, but Graff said when it occurs continually problems can arise.

“When you have more than one call in a zone at a time and you only have so many resources, you have to wait for resources to come from another zone…it’s almost like a domino effect. If Station 1 is on a call and Station 2 runs to Station 1’s zone, and then a call goes down in Station 2’s zone, now Station 3 has to come over to Station 2’s zone, and then before long everybody is in somebody else’s zone. When that does happen, you end up with getting longer response times.”

Graff pointed out that the emergency call software MCFR uses is programmed to react to units being outside of their zone, so while response times might rise as a unit must respond outside its zone, the software can automatically adjust.

“Our computer-aided dispatch automatically recommends the next closest unit, so it’s pretty automatic, so it’s just the drive time gets to be what you end up waiting on.”

When it comes to breaking down and analyzing call response times, Graff said MCFR is constantly evaluating itself and looking for ways to improve. 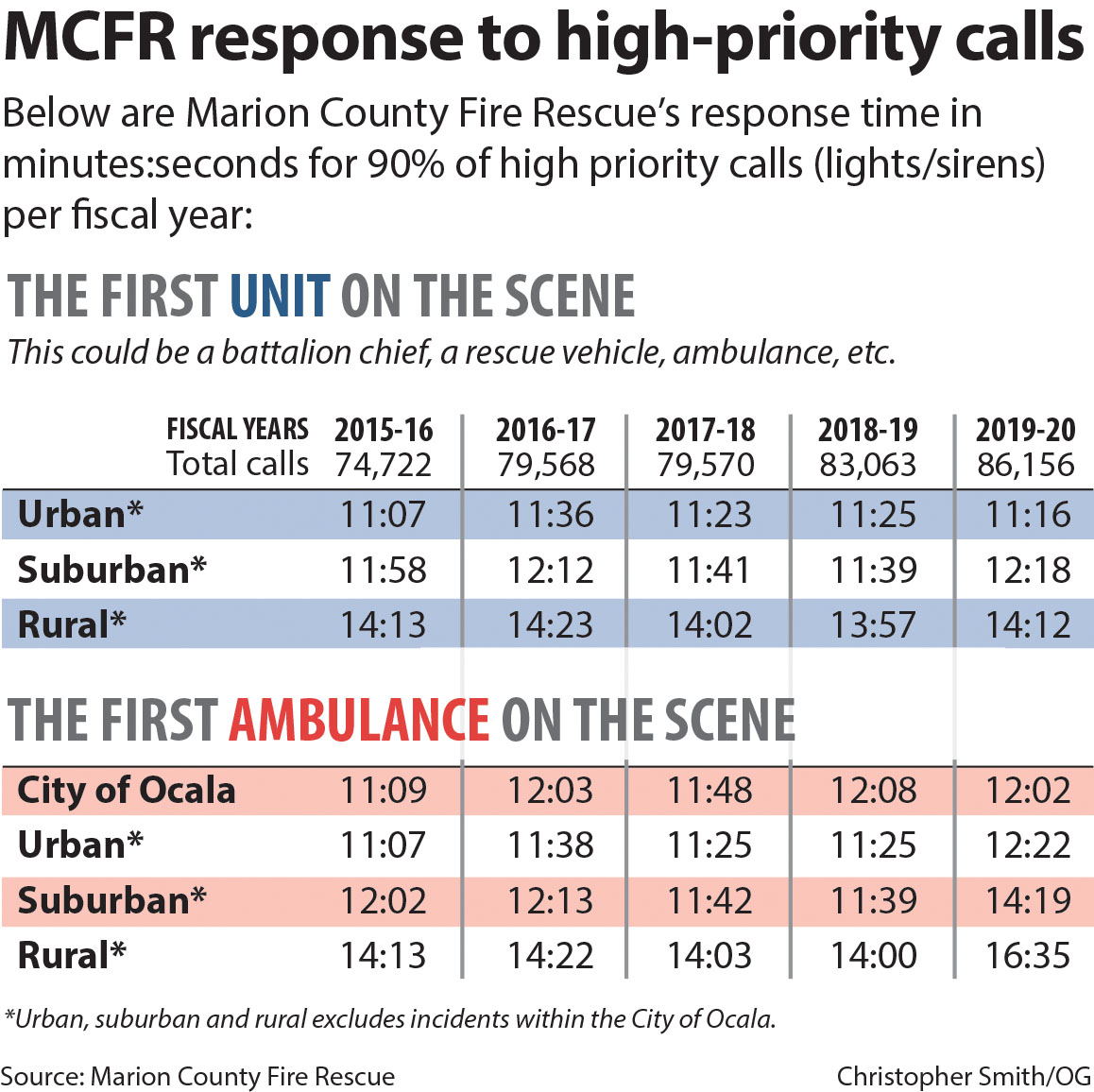 In addition to breaking the times down by shift, zone and station, Graff noted the times are also categorized by location type as well.

Adding resources is one avenue departments such as MCFR can use to make improvements to their system, but Graff cautioned this step has its considerations.

“And of course, anything you add to the system has a cost associated with it. So, when you go to the board [Board of County Commissioners] and you say ‘hey look, our response times are failing in XYZ, we need to add this resource and it’s going to cost this amount of money’, and then the board can make a decision on whether that addition is warranted or not and if there are funds to fund it.”

Finding the balance between ensuring Marion County has adequate emergency response coverage and not breaking the bank is something Graff pointed out must be factored in.

“It’s not fiscally responsible or even capable, I think, to have a unit available every single minute of every single day.”

COVID-19 brought its own set of issues to Marion County, and much like everyone else, MCFR was not immune. Graff described how the virus affected call volume and their responses.

“So originally when COVID first came out, we saw a decrease in calls we ran and the number of transports. And it stayed low for a little while.”

The low call volume was only temporary, Graff said.

“And then it came back, and we are above where we were before COVID came in. We’ve had a significant increase in the number of calls that we’re running. And so, when you add more calls and don’t add more resources you run into a concurrency problem,” he says.

And while MCFR has responded to the increase in calls, Graff said they are aware how the higher volume of calls will impact the time it takes to respond to them.

Despite the intensified workload COVID has brought with it, Graff said the increase in call volume has been manageable, and local hospitals have worked with MCFR to get patients transferred over.

“Our bed delays haven’t been so bad. They’re creeping up a little bit right now, but for the most part, the hospitals have done a really good job of getting our patients off of the stretcher and into a room.”