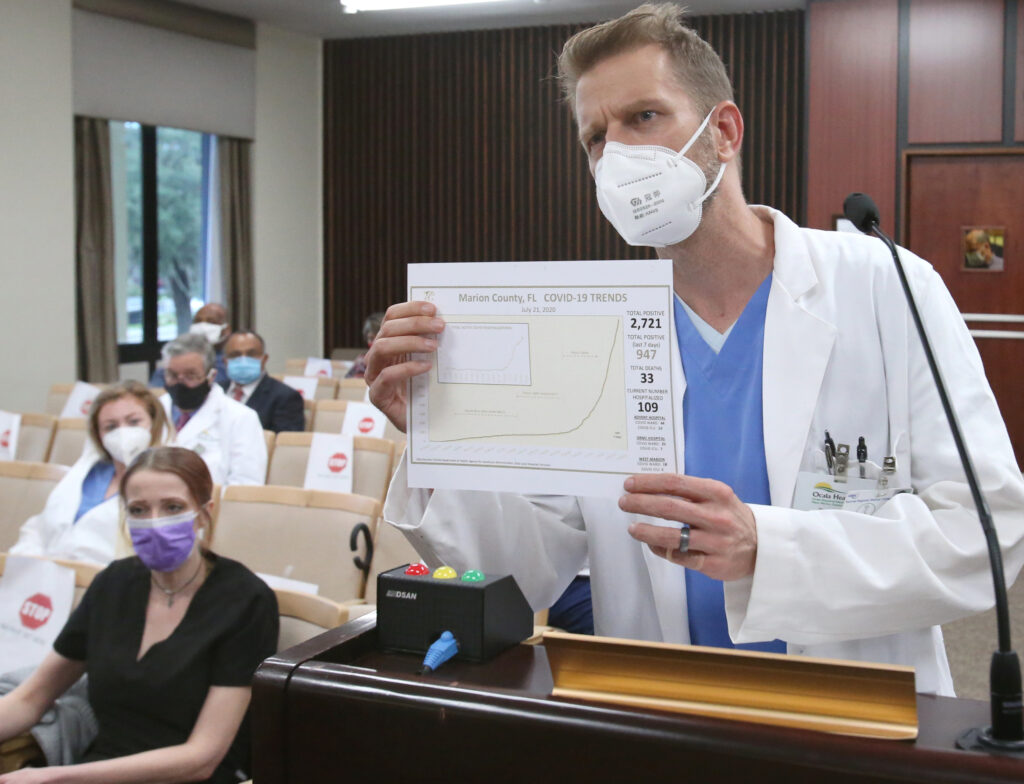 Dr. David Kuhn of Ocala Health holds up a chart showing the increase in COVID-19 positive cases and deaths in Marion County as he speaks in favor of an emergency ordinance to require face coverings during the Ocala City Council meeting at Ocala City Hall in Ocala, Fla. on Tuesday, July 21, 2020. The City Council voted 3-2 against the emergency mask ordinance suggested by Councilman Matt Wardell that would have required people in Ocala to wear face coverings in indoor locations amid the COVID-19 pandemic. [Bruce Ackerman/Ocala Gazette] 2020.

Dr. David Kuhn holds up a chart showing the increase in COVID-19 positive cases and deaths in Marion County during an Ocala City Council meeting in this July file photo. The council eventually voted to implement and mask ordinance for the city. [Bruce Ackerman/Ocala Gazette]

TALLAHASSEE – After months of legal wrangling across Florida about mask requirements during the COVID-19 pandemic, a challenge to a Palm Beach County mask mandate may go to the state Supreme Court.

Opponents of the mandate have filed notice asking the Supreme Court to consider the case after an appeals court did not rule in their favor. The court does not have to take up the issue.

Several lawsuits across the state have challenged mask ordinances implemented since the outbreak of the COVID-19 pandemic, including one in Ocala.

In August, Christina Miller filed a lawsuit in the 5th Judicial Circuit challenging the emergency mandate passed by the Ocala City Council. The suit called the measure an unconstitutional and unlawful delegation of powers by the city in forcing business owners to police the wearing of face masks or face potential fines.

Eventually, the council removed most of the penalties behind the ordinance and excluded churches from the mandate.

The case was dismissed in November after Miller did not pursue the issue. The Ocala mandate was recently extended until April.

A separate challenge to an Alachua County mask requirement went before the 1st District Court of Appeal in November. A ruling is pending.

In the Palm Beach case, the move to the Supreme Court came after a panel of the 4th District Court of Appeal on Jan. 27 upheld a circuit judge’s refusal to block the mask requirement.

While justices do not have to take up the case, it could become a test for challenges to mask requirements in the state. For example,

Palm Beach County issued an emergency order in June that required face coverings to be worn at businesses and government facilities, on public transportation and in other public places where social distancing is not possible. The order, which has been extended several times, includes exceptions to the mask requirement for such things as eating, according to the appeals court.

Gov. Ron DeSantis has not issued a statewide mask mandate deferring to the local governments.

Ocala Gazette contributed to this story.