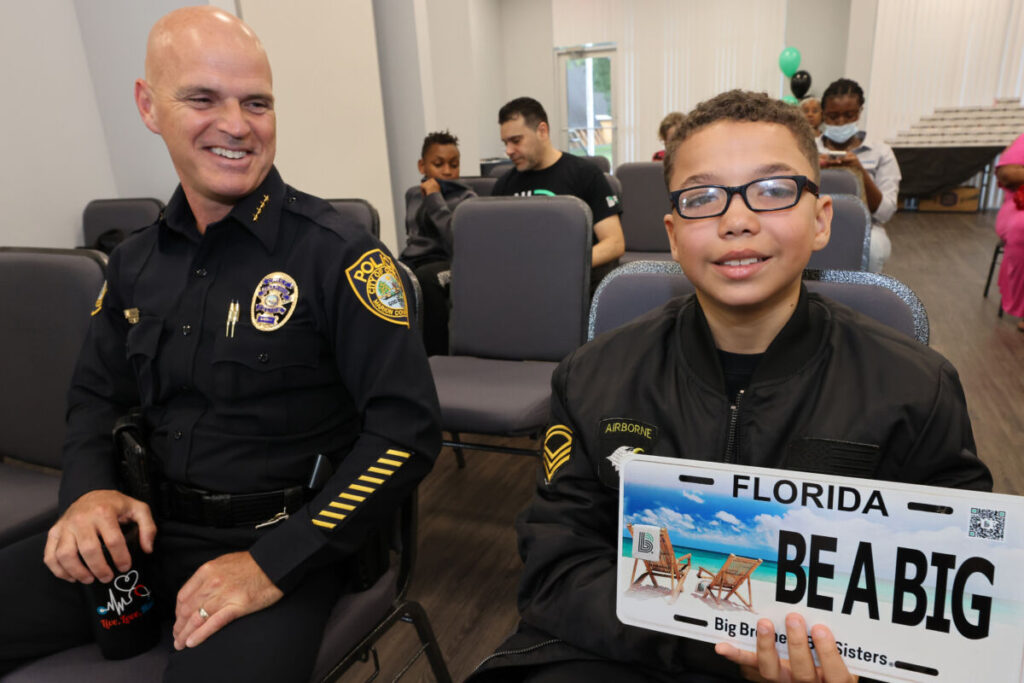 Michael McIntosh, 11, right, who is being mentored by Ocala Police Chief Mike Balken, shows a Big Brothers Big Sisters sample license plate as Balken, left, looks on during the Big Brothers Big Sisters event held to announce the proposed reinstatement of the program in Marion County at the District 1 Community Auditorium in Ocala on Saturday, May 7, 2022. [Bruce Ackerman/Ocala Gazette] 2022.

Big Brothers Big Sisters of Marion County had its official launch Saturday and the organization is seeking volunteers in the community to mentor at-risk children and teens.

Stephanie Gavin, program coordinator for Marion County, said it has a list of nearly 20 area youth that are waiting to be matched with a positive role model.

“We’re seeking people that have some time to spend with a child and make a difference in their life”, said Gavin, who worked for the Big Brother Big Sister organization in El Paso Texas for 15 years before returning to her native Ocala to take on her new role last fall.

“We are looking to make a big impact here in the lives of our families and the lives of our youth,” she said. “The main thing I want the community to know is that we have kids waiting for a mentor.”

A college degree isn’t required and mentors don’t have to be a well-known person or have a high rank in the community either, said Gavin.

“The most important thing is they need to have the heart to do it,” she said. “If they have a good heart, good morals, and good ethics they can be a great role model and mentor for a child here in Marion County.”

Mentors must spend a minimum of eight hours a month with their, “Little,” and they typically participate in fun activities together such as sports, going to parks or museums, or work on school projects or homework.

“It’s not that hard; it’s only four hours twice a month,” said Gavin. “You take them out in the community, talk with them, give them guidance and advice and point them in the right direction.”

“You’d be surprised just how much of a difference just eight hours a month can make in a kids’ life,” she said. “Some of these kids don’t have the best relationship with their parents and they need someone they can trust and depend on.”

Ocala Police Chief Mike Balken recently began mentoring a child named Michael through the organization’s Bigs in Blue/Bigs with Badges program and was the first member of the OPD to be matched with a Little Brother. 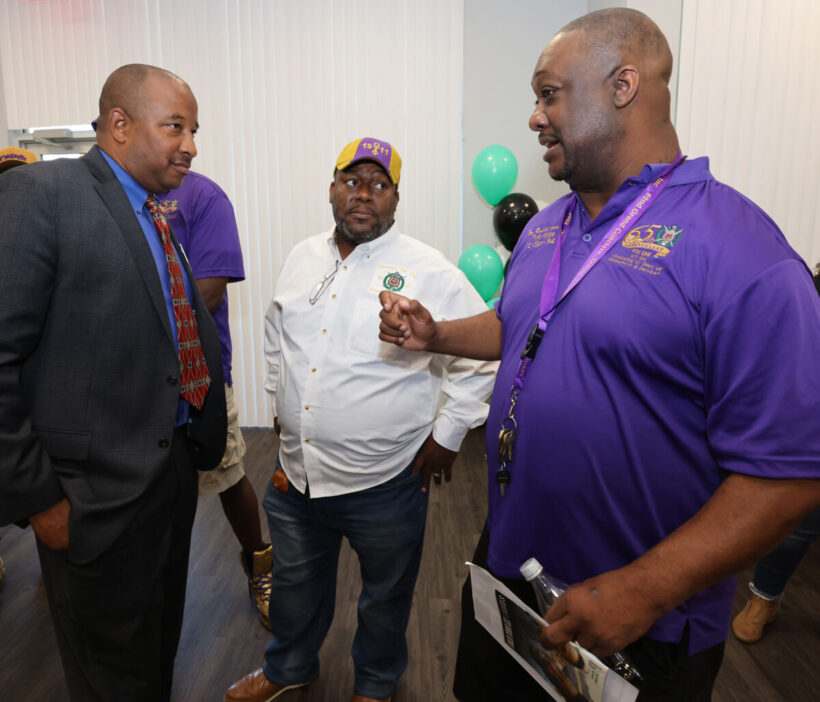 During a May 7 launch event, he challenged the community to join him in the program.

“Ocalans is generous with their checkbooks when there is a good cause. But some problems can’t be solved with money. In this case, we need people who can make a consistent time commitment to these kids,” Balken said.

The program is a national initiative designed to improve communication and understanding between law enforcement agencies and the communities they serve.

Balken has been vocal about the need for parental and community involvement with at-risk youth in the Ocala area, especially following the arrests of two 14-year-olds on murder and attempted murder charges March 31.

Cedrick Bowie, 14, and Dave Foster Jr., 14, are accused of being accomplices in the fatal shooting and robbery of Jacorie McCullough, 23 nearly a week earlier.

In an interview with the Ocala Gazette in early April, Balken addressed the youth violence issue.

“We know that there is…that we have a gang issue that is largely contributing to our violent crime,” said Balken. “And it’s retaliatory in nature.”

Balken blamed the spike in crimes committed by youth on a weak juvenile justice system that allows offenders to get off too easily and lack of parental involvement and discipline.

“The kids that are doing these shootings don’t have that, he said. “Their parents don’t give two damns; to me, it’s a breakdown of the family unit.”

Gavin said she doesn’t remember crime being such an issue when she was growing up in Ocala.

“That’s two youth that has thrown their lives away and for what,” she said. “That’s why this isn’t just a job for me it’s a mission.”

“The reason I’m pushing so hard for this is that the youth are our future,” said Gavin. “We want them to grow up with good morals and a good education, and the confidence to believe in themselves.”

Anyone in the community who’s interested in becoming a mentor can contact Big Brothers Big Sisters of Marion County at 352-566-3094, StephanieG@bbbstampabay.org, or apply in person at 324 SE 24th St., in Ocala.