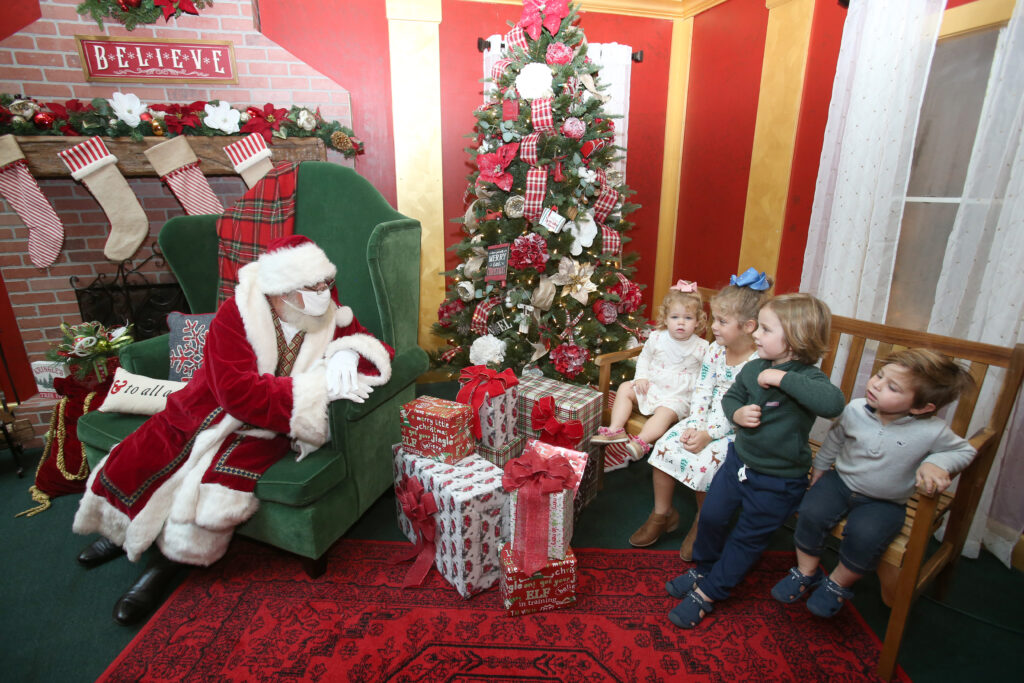 Santa Claus visits with Hallie Ehlers, 1, Maisie Ehlers, 4, and their cousins, Tag Bryant, 4, and Banks Bryant, 2, left to right, as he asks them what they want for Christmas on the first day of Santa At The Mall at Paddock Mall in Ocala. [Bruce Ackerman/Ocala Gazette]

Santa Claus visits with Hallie Ehlers, 1, Maisie Ehlers, 4, and their cousins, Tag Bryant, 4, and Banks Bryant, 2, left to right, as he asks them what they want for Christmas on the first day of Santa At The Mall at Paddock Mall in Ocala. [Bruce Ackerman/Ocala Gazette]

When Ashley Gerds was hired by Washington Prime Group Inc. to manage Ocala’s Paddock Mall, she was asked what changes she would like to make.

Toward the top of her list: A new Santa set.

But such holiday additions come with a hefty price tag, so Gerds was told that if she could find someone to design it and come up with a way to pay for it, she could get her wish.

Gerds, who envisioned a detailed and innovative design for the holiday display, reached out to Tyler Stentiford with Stentiford Construction. Stentiford, who earned a degree in architectural and scenic design from the University of South Florida, took Gerds’ vision, added his two cents, and brought it to life.

“Tyler and I worked together with his dad, Paul, with Stentiford Construction, and Tyler kinda heard me out of what we were looking to do,” Gerds said. “And we put our minds together and Tyler came up with this walk-thru design.”

The mall’s 3000-square-foot custom Santa set debuted last Christmas after months of planning and about a month and a half of construction.

“The challenge is everything within the entire set has to fit through a 32-inch, 7-foot door,” Stentiford said. “So it all has to be broken down and be able to be moved that way. And you’ll see when you walk through it that it’s big.”

The goal was to evoke the same visceral experience of walking through a Disney attraction queue. Visitors make their way through three rooms of Santa’s house. Last year, the set included four rooms, but to abide by CDC social distancing guidelines, the fourth room was omitted this season.

“Our guests’ safety is our top priority and we have taken numerous measures to ensure a safe, but fun holiday experience,” Gerds said.

After walking through Santa’s yard full of Christmas trees, visitors stop in the first room, where they are challenged to find their name on Santa’s list.

“There’s not supposed to be one that repeats,” Stentiford explained. “It took a long time, but we have a system we use that generates names from all over the world, all different backgrounds and creates it.”

After finding their names (or not), guests stroll through Santa’s wrapping room, where Mr. Claus “puts a bow” on everyone’s gifts before loading them onto Santa’s sleigh. 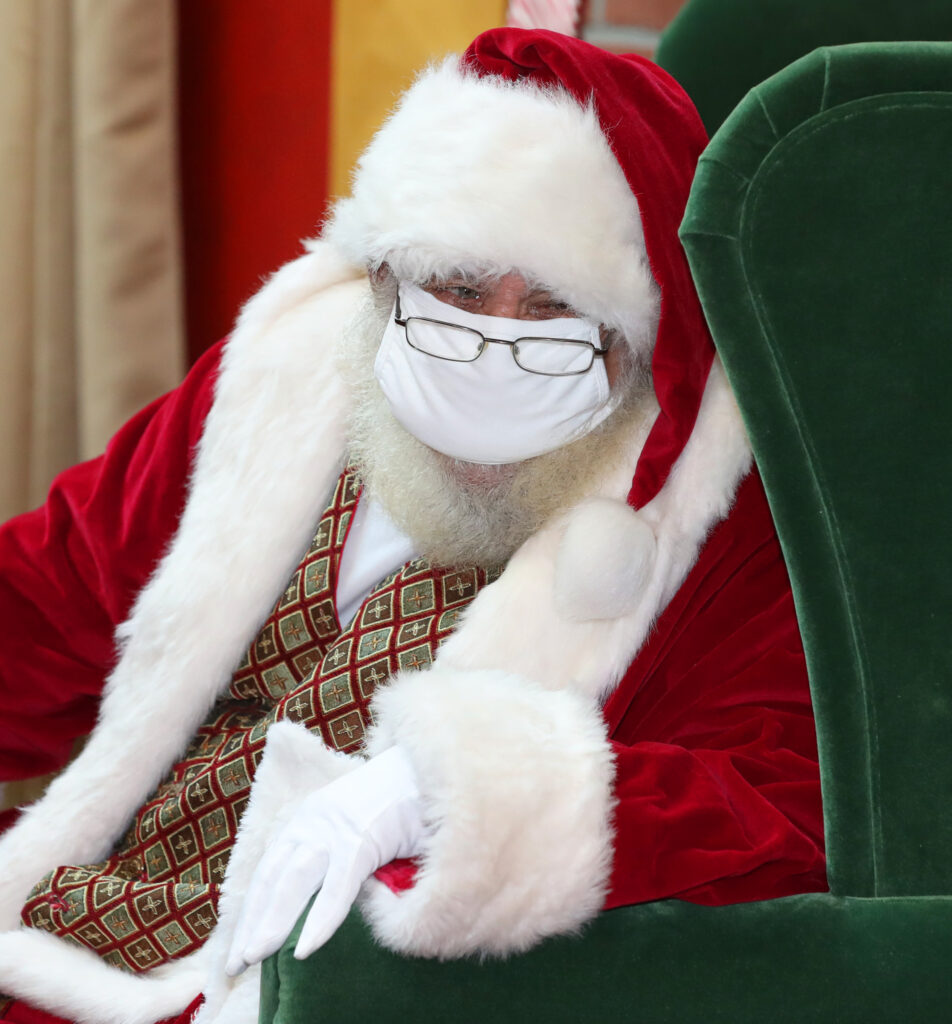 Santa, who will be at Paddock Mall through Christmas Eve, brought a life-sized animatronic reindeer named Pickles. [Bruce Ackerman/Ocala Gazette]

And once ushered into Santa’s living room, guests are greeted by the big man himself, all while taking in many details that Gerds and Stentiford added.

Santa’s fireplace is complete with a fire simulator, mimicking real flames, and a chimney that releases “smoke” every 30 seconds.

“Next year we will change the color schemes a little bit so that we have something a little bit newer and fresher,” Gerds said.

Outside of Santa’s home, the surrounding lawn is complete with a forest of Christmas trees, which Gerds hand decorates, Santa’s sleigh, a train and Pickles, the life-sized, breathing, eating and blinking, reindeer.

“We ended up ordering this reindeer and he had to come from China and he got stuck in Customs,” Gerds said. “So he didn’t make it for our grand opening (last year), but he arrived a few days later and we were able to put him out. So this is his second year.”

According to Stentiford, when Pickles arrived in New York on a freighter, he had to be scanned a number of times to ensure nothing illegal was being transported in his hollow body.

“He came a long way to be here with us,” Gerds joked. “He’s been around the world and back. So Pickles will be with us a while.”

There is still plenty of time for families to visit Santa and Pickles at the Paddock Mall for picture opportunities provided by Cherry Hill.

“Cherry Hill is the photo company that leases this space from us,” Gerds explained. “Everything after they open is on Cherry Hill for them to do all the photo packaging and taking photos, printing photos, setting the prices and all that.”

The Paddock Mall’s Santa set will be up and running from now until Christmas Eve. Advance reservations are strongly encouraged, but not required. Reservation information and Santa set hours can be found at paddockmall.com.