With those words, Jaye Baillie summed up Monday’s grand opening of the new downtown Ocala Hilton Garden Inn. Baillie, who once went to the former Chamber of Commerce site each day when she served as executive director of that organization, noted that for much of Ocala’s history, a hotel has stood on that site.

She is right, of course. What is particularly fascinating, though, is not just that a hotel is going where a hotel once stood but the similarities between the hotels then and now.

For 121 years in the 19th and 20th centuries, the Ocala House stood where Danny Gaekwad’s Hilton is today. Here’s what a brief history from Ocala’s Historic Preservation Society says:

“In 1883, an 1847 frame building, identified as the first Ocala House, was demolished to make way for a new 150-room, three-story imposing brick hotel bearing the same name, fronting the east side of the courthouse square at what was East Broadway and Main Streets. The hotel was … one of the first of several grand Florida hotels commissioned by Henry Plant throughout the state during the period. … At the time of its completion, the Ocala House was the largest brick hotel in the state.”

Actually, the original wood-frame Ocala House burned to the ground with the rest of downtown in the great Thanksgiving Day Fire of 1883. Like the rest of the rebuilt downtown, the new Ocala House was brick.

The Ocala House, like the Hilton today, was a centerpiece of the downtown until it was demolished in 1968. And like the new hotel, the old one gave patrons a unique view of the city.

“From a balustraded deck on top of the building, nearly all of the city could be seen,” says the written history.

Well, one of the features of his hotel that Gaekwad is most proud of is a large, 6,000-square-foot terrace that overlooks the downtown square.

“You can stand here and see people you know on the street,” he told me. It’s true. The yawning terrace will also feature a bar with a 93-inch big-screen TV and surely will become a downtown gathering place.

So, yes, history is repeating itself.

But at the same time it was repeating history, the new Hilton on Monday was making history. Make no mistake, it will change not only the look but the vibe of downtown. And if city Growth Management Director Ty Chighizola is right, it will be a catalyst for more downtown development.

“I think it’s huge for downtown,” Chighizola told me in an earlier interview.

“There’s just a lot of opportunities with a hotel as a core. Having that national brand gives us credibility in our downtown.” 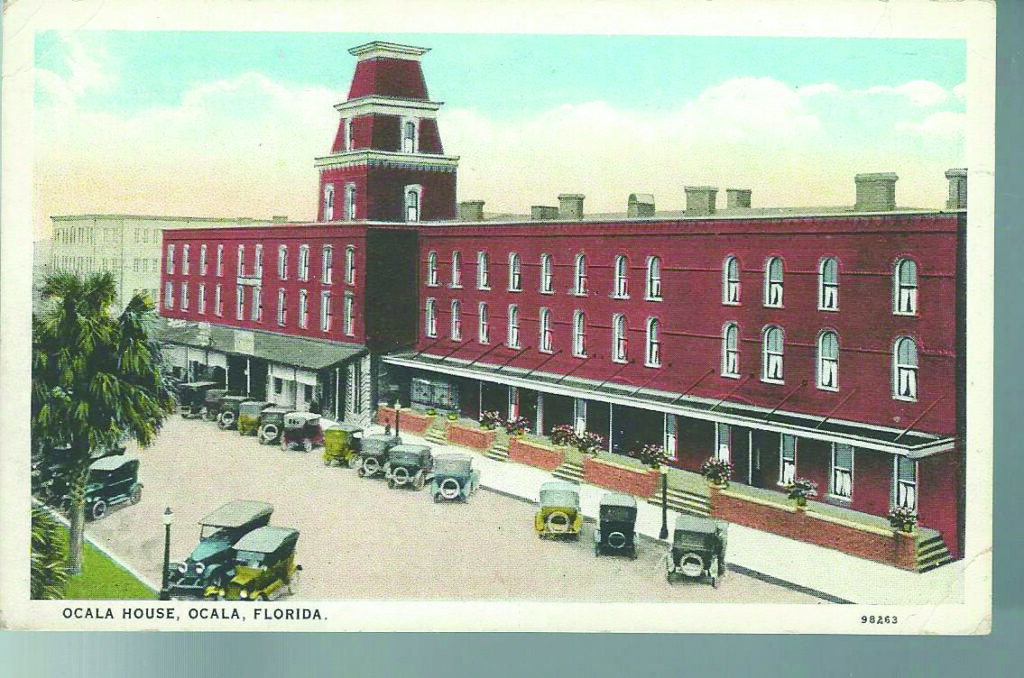 So, while the grand opening of the downtown Hilton Garden Inn was a somewhat low-key affair attended by 100 or so dignitaries and friends of Gaekwad’s, it was a monumental moment for downtown Ocala. It not only changed the face of downtown but likely changed downtown’s trajectory as well. Gaekwad estimates that his hotel, if it averages 70 percent occupancy nightly, will bring more than 50,000 new visitors to downtown Ocala each year. That, folks, would be a game-changer.

The hope of both Gaekwad and Chighizola is that the new hotel will make coming downtown not just a visit but “an experience.”

“It’s nice to have that urban hotel feel where people can walk to do things,” Chighizola said. “It’s more of an experience than a stay in a hotel.”

Congratulations to the city of Ocala and to Gaekwad for bringing this project to fruition. It was long talked about. And once the decision was made to level the old Chamber of Commerce building and move forward with finding a hotel developer, negotiations took years. Construction delays and other setbacks pushed the opening date back more than a year.

That is all history now. And a new chapter in downtown Ocala’s history is under way — right back where it started.

The best start in school history for West Port’s softball...

Jumbolair, home to one of the country’s longest private runways,...

In Marion County, a vaccine milestone in site

As an artist and art educator, Charles Eady has a

Floral Heart Project Wreath Laying on the Ocala Do

Ocala's got gas. Our O.G. Toon for this week featu

After Florida received widespread praise for its h