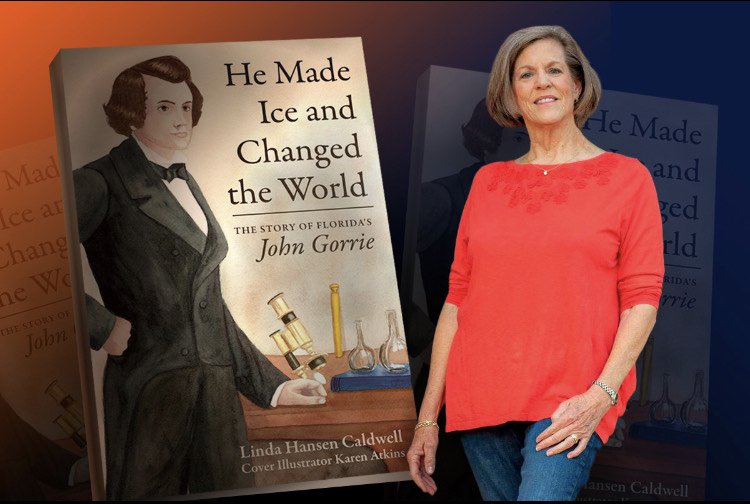 Linda Hansen Caldwell claims she isn’t a writer. Nevertheless, at 66, Caldwell recently released a 154-page biography titled “He Made Ice and Changed the World: The Story of John Gorrie.”

Caldwell’s book chronicles the life of Dr. John B. Gorrie, the developer of a mechanical refrigeration machine that led to the nation’s first air conditioning system.

Thought to be born in 1803, Gorrie worked as a physician all his life and was determined to find a way to make ice so he could treat his patients during the summer. Gorrie faced huge obstacles and was ridiculed for his ideas, and though credit was later given to Willis Carrier for developing a modern system of air conditioning, few people know that Gorrie was the one who first made it happen, said Caldwell.

Not only did Gorrie miss out on the recognition, but he also died penniless in 1855 in Apalachicola, she added.

For Caldwell, writing a book posed a whole new challenge. A teacher in Florida schools for many years, she had authored curriculum guides and had edited textbooks for area schools. It was during the years she taught at John Gorrie Junior High School in Jacksonville that she developed a keen interest in the school’s namesake. Then, during a visit to the John Gorrie State Park, the museum staff told Caldwell they’d been looking for someone to write Gorrie’s biography, but nobody wanted to do it. They encouraged her to take on the project.

“This was one of the greatest challenges I ever had,” said Caldwell. “I didn’t know any publishers or agents. All I had was a lot of support from a lot of influential people who remembered his legacy and wanted to preserve it. They said, ‘Linda, if you don’t write it, who will?’”

The entire project, including research and writing, took about 18 months. Also offering support, Joshua Hodson, manager of the John Gorrie State Park, connected Caldwell with officials at the University of Florida’s College of Medicine, which gives an annual award to medical students in Gorrie’s name. The foreword of Caldwell’s book was written by Dr. Robert Watson, professor emeritus, and the back cover statement was written by Dr. Patrick Duff, associate dean of student affairs. Hodson composed the afterword.

After a long, hard search for a publisher, Caldwell went with a hybrid company, Atlantic Publishing Group in Ocala. She invested $4,000 and also shot about a dozen photos for inside the book. Tennessee artist Karen Atkins did the cover design.

“I had almost given up when I heard from Atlantic,” Caldwell recalls. “Dr. Gorrie had a huge impact on my life. He never gave up, despite the fact he had huge obstacles. Had it not been for his accomplishments and selfless service to his fellow man, I would have no story to tell. He was a humble person, a deep thinker, and always put others before himself.”

“Dr. Gorrie’s story could be in every school and every library in Florida,” Caldwell said. “I would like to see Dr. Gorrie’s legacy remembered and respected. When you really want to do something and help others, you can always find a way. It was my honor to write his story.”