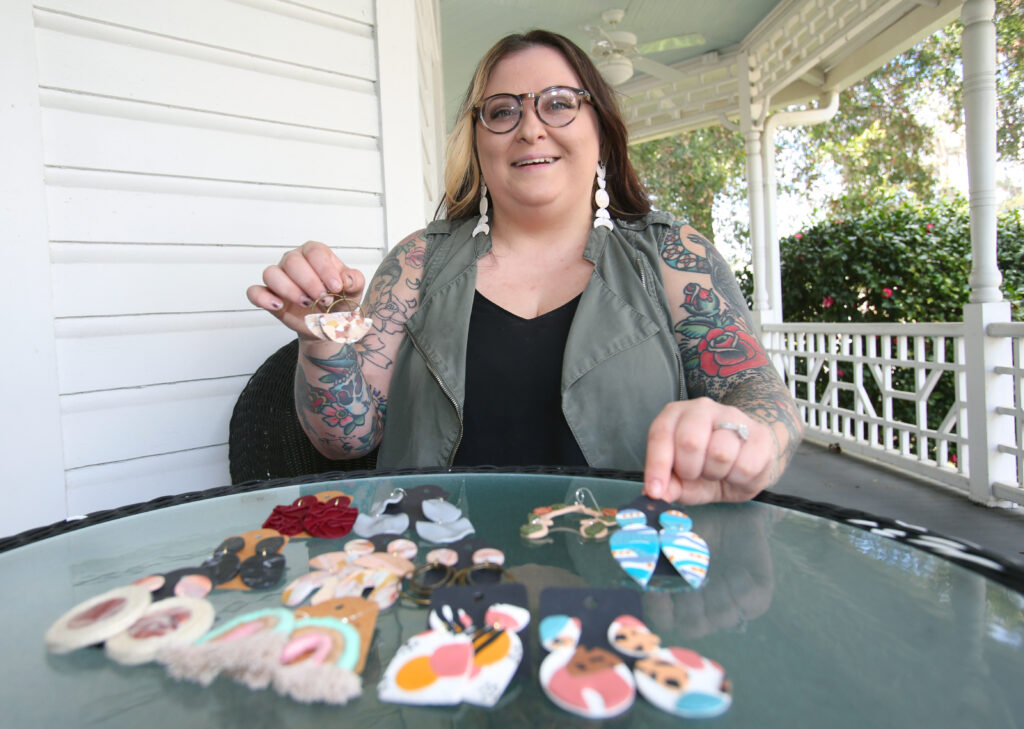 Megan Sparkman shows off a selection of earrings that she has made for her Street Spirit Jewelry business on Jan. 11. Sparkman started making the jewelry about 10 months ago when she was in quarantine due to the COVID-19 pandemic. [Bruce Ackerman/Ocala Gazette] 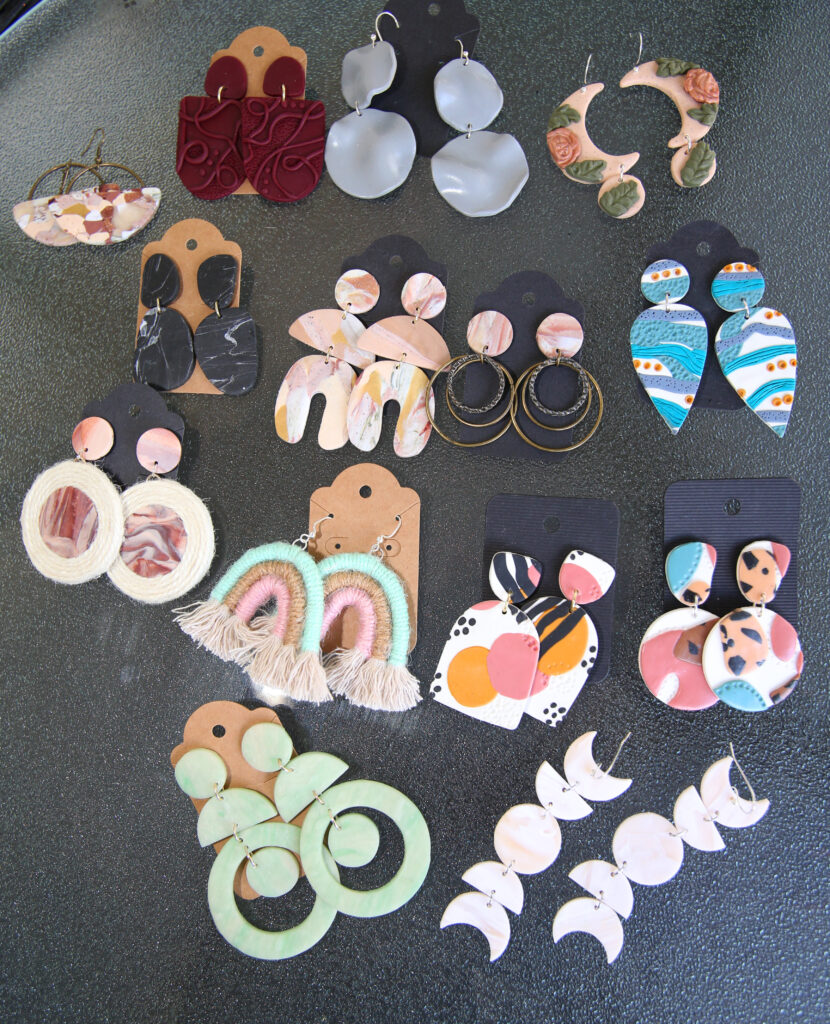 A selection of Sparkman’s earrings she designed and made for her Street Spirit Jewelry business are shown. [Bruce Ackerman/Ocala Gazette]

Having to quarantine during COVID-19 provided a surge of creativity to Megan Sparkman.

Before the pandemic, she was often busy performing in the musical duo Caly and Megan. Then last spring, when many venues stopped booking live music, she suddenly found herself with time for a new hobby. She discovered macramé online.

“I really like modern decor but with a bohemian vibe,” she explained. “I actually started with wall hanging macramé. I just wanted to make pieces for my own home and learn how to do it. And I really enjoyed that, so I wanted to bring that smaller scale, so I started to do macramé earrings.”

It takes nearly an hour for Sparkman to craft a pair of macramé earrings, using natural materials including cotton and hemp cording, as well as metal hardware designed for sensitive ears.

Drawn to neutral colors and a penchant for chandelier-style statement earrings, she found those designs also resonated with other women.

Once she’d mastered macramé, Sparkman had an urge to try polymer clay, which allowed her to experiment with more colors, shapes and textures.

Megan Sparkman shows off a selection of earrings that she has made for her Street Spirit Jewelry business on Jan. 11. Sparkman started making the jewelry about 10 months ago when she was in quarantine due to the COVID-19 pandemic. [Bruce Ackerman/Ocala Gazette]

“The polymer clay is really popular right now,” she noted. “I had seen different designs, and so I became really interested in that.”

The lightweight, mixed media clay earrings proved to be even more popular than her macramé styles. After a couple months, her friends convinced her to stop giving them away.

“They were like, ‘You’re putting out good quality stuff. You should be selling it,’” she recalled. “So I made the Instagram and started taking photos and posting all the stuff. And the response was really, really good.”

When Sovereigns & Scoundrels opened downtown in October, Sparkman showed them an assortment of her handmade styles.

“That was the coolest thing ever, to go in there and show my stuff and have them be like, ‘We want every single piece you brought,’” she said.

Sparkman will soon make her debut as a vendor at the Ocala Downtown Market. She said support from the community has been the most surprising and fulfilling part of her new venture. But for her, what started as a hobby is still a kind of therapy. She doesn’t even listen to music while she’s crafting jewelry, preferring its meditative value. 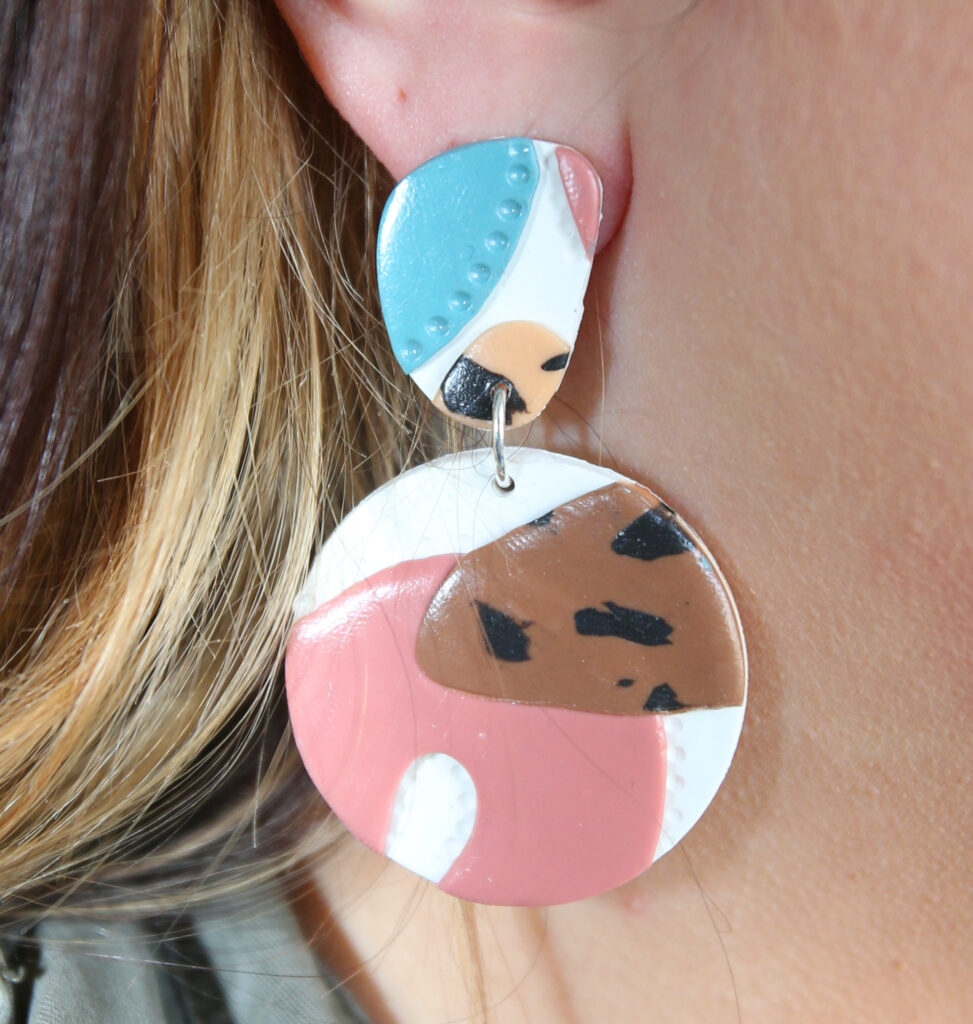 Most of Sparkman’s design are fashioned from polymer clay, natural hemp and twine. [Bruce Ackerman/Ocala Gazette]

“It’s a very therapeutic process for me,” she said. “It’s honestly my place of center when I’m doing it. The only thing that matters is how they’re looking, how the design is progressing. There’s no other background noise. There’s nothing. There’s just this. I feel like this and music are two of the biggest pieces of myself.”

Her brand name, Street Spirit Jewelry, was inspired by one of her favorite songs, Radiohead’s “Street Spirit (Fade Out).”

“As soon as I knew I was going to start selling, it was the first thing that came to mind for a name,” she remembered. “And I feel like it really fits with the style of what I am doing.”