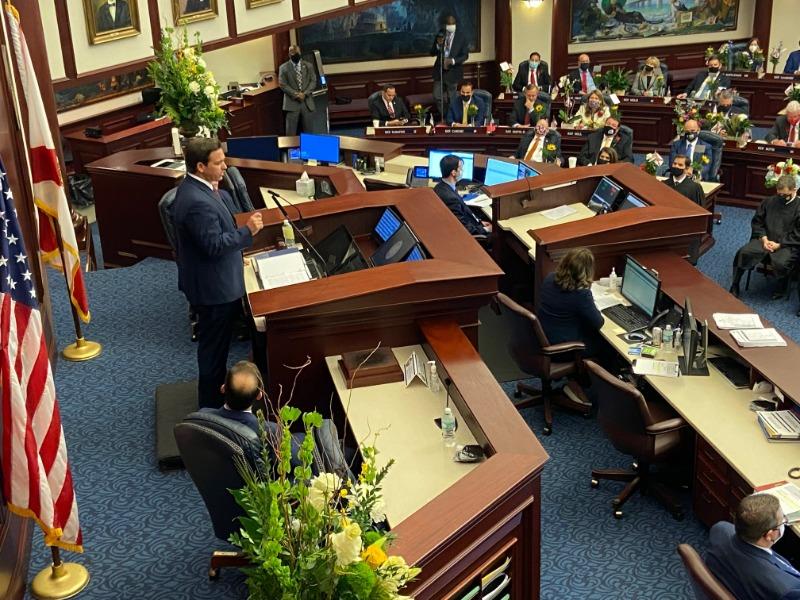 Gov. Ron DeSantis gives his State of the State address on Tuesday during the opening day of the Florida Legislative session in Tallahassee. [News Service of Florida]

TALLAHASSEE – Gov. Ron DeSantis launched the 2021 legislative session Tuesday with a State of the State address that touted the state’s actions during the COVID-19 pandemic and touched on hot-button issues that lawmakers will face over the next 60 days.

DeSantis did not announce major new initiatives during the 28-minute speech but tried to contrast Florida with what he described as a “calamitous reality” in other states of closed schools and shuttered businesses.

Frequently interrupted by applause as he spoke in the House chamber, DeSantis said Florida took the right approach during the pandemic by focusing on caring for seniors, allowing businesses to reopen and making sure children could receive in-person instruction. He said the consequences of keeping students out of schools in other states will be “catastrophic and long-lasting.”

“The failure of so many places outside of Florida to open schools at the beginning of the school year will go down as one of the biggest policy blunders of our time,” DeSantis said.

He also said Florida will lower flags to half-staff Wednesday to honor people who have died of COVID-19 and their family members. About 31,000 Florida residents have died since the pandemic hit the state last March.

“We are saddened by the thousands of Floridians – and hundreds of thousands of Americans – who have died with COVID,” DeSantis said. “And we sympathize with the family members who in many instances were not even permitted to see their loved ones in person, either in the hospital or at a nursing home.”

The State of the State address is a traditional kickoff for the annual 60-day legislative session. The pandemic will shadow numerous major policy and budget decisions this year and has revamped the way the Legislature operates – as was apparent Tuesday when senators watched the State of the State address on a video screen in their chamber, rather than walking across the Capitol’s fourth floor to join their House counterparts.

DeSantis’ themes about how the state has handled the pandemic largely echoed comments he has made for months. And while he offered an upbeat picture of the state, Democrats quickly criticized him Tuesday for not addressing issues such as expanding Medicaid to provide health care to more Floridians.

Senate Minority Leader Gary Farmer, D-Lighthouse Point, said in a response to DeSantis’ speech that Republicans are “trying to convince Floridians that they’re the party of the people.”

“But their actions tell another, very different story,” Farmer said. “Their legislation does nothing for the average working person. They don’t help Floridians weather the pandemic until the economy rebounds, or spur good-paying jobs. They don’t put food on the table or affordable health care within reach. They don’t better educate our kids or bring more accountability into the education system. And they certainly don’t help build a promising future.”

Agriculture Commissioner Nikki Fried, the only statewide elected Democrat, took issue with DeSantis’ priorities and said people in the state are “still suffering.”

As lawmakers have prepared for the session, Republican legislative leaders have repeatedly warned about likely budget reductions because the pandemic has cut into state tax revenues. But as he did when he released a $96.6 billion budget proposal in January, DeSantis offered a rosier financial picture Tuesday.

“The forecasts were dire. The 2021 legislative session was shaping up to be a fiscal nightmare,” he said. “I am pleased to report that our current fiscal outlook is much better than the bleak forecasts from last spring.”

DeSantis also discussed a series of controversial issues that have started moving forward in the Republican-dominated Legislature. For example, he pointed to legislation that supporters say would help crackdown on violent protests.

“Florida is — and must remain – a state dedicated to law and order,” DeSantis said. “When riots broke out across the nation last year, we saw cities ruined by violent mobs. Law enforcement was targeted and lawlessness prevailed. This was not – and must never be – tolerated in the state of Florida.”

But the legislation has drawn heavy criticism from Democrats, who say it is overkill and could be used to restrict people from peacefully protesting. House Minority Co-leader Bobby DuBose, D-Fort Lauderdale, said Tuesday opponents of the measure (HB 1 and SB 484) are worried it “attacks our First Amendment rights.”

DeSantis also touted legislation that would change vote-by-mail procedures, an issue that Republicans have pushed across the country after former President Donald Trump lost the 2020 election.

DeSantis acknowledged that Florida had a smooth election in November but said additional steps are needed to make sure it doesn’t experience problems such as it has had in the past. Democrats, however, contend Republicans are trying to restrict voting by mail, which Democrats used heavily in November.

“It’s tough to imagine this is anything but a reaction to so many voters choosing to vote by mail for the first time, and not voting Republican,” DuBose said in the House Democrats’ response to DeSantis’ speech.