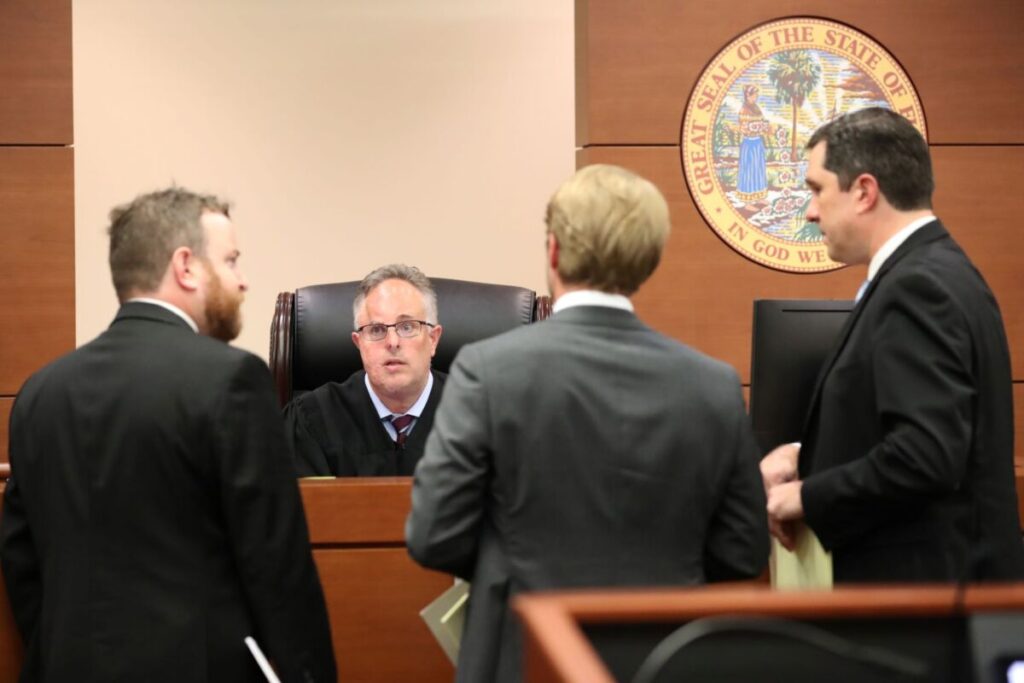 Judge Robert Hodges has a bench conference with attorneys Jason Zimmerman, Robert Batsel Jr. and Derek Schroth, left to right, during the $80 million City of Ocala Fire Fee lawsuit hearing at the Marion County Judicial Center in Ocala, Fla. on Tuesday, May 10, 2022. More than 250 concerned citizens packed courtroom 1 for the final hearing of the lawsuit at the courthouse. [Bruce Ackerman/Ocala Gazette] 2022.

An attorney who represented Ocala utility customers in a class-action suit over $80 million in illegally collected fire service fees has asked a judge to toss out an appeal filed by another attorney representing himself as a class member who is challenging how legal fees in the long-running conflict were calculated.

In his motion to dismiss, Derek Schroth calls the claims by attorney George Franjola “frivolous” and filed “for the purpose of improperly extracting money” from Schroth’s law firm. He also said Franjola’s appeal violates Florida Bar Rules on conflicts of interest.

Franjola is in a unique situation in the complicated case that stems from the city improperly collecting fire service fees for years from utility customers, fees that the courts have deemed an illegal tax and ordered refunded to the residents and businesses. Not only was he a member of the law firm that defended the city in the case, as an Ocala resident, he is also one of the customers due a refund and thus a member the class that Schroth represents.

Franjola told the Gazette that he never opted out as a claimant in the suit while simultaneously working as an attorney for the city’s law firm, Gilligan, Gooding, Batsel, Anderson and Phelan P.A. He left the law firm in May 2020 and says he did not discuss with his former colleagues the appeal he has filed as an individual.

In support of his motion to dismiss Franjola’s appeal, Schroth attached an email from Franjola that Schroth characterized as an attempt to extract money.

In the email, Franjola explains that if he is successful in his appeal, it would reduce the fees Schroth is due to receive by $5.2 million, whereas if Schroth successfully defends the appeal, Franjola would only be out time and several thousand dollars.

“Since your risk substantially greater than mine, I would hope that you would consider submitting the matter to mediation at the earliest opportunity to see if a third-party neutral can help get this resolved quickly,” the email reads.

Franjola told the Gazette last week that his mediation request was not an attempt to profit personally. Instead, it was his effort to reduce attorney’s fees for the class, money that will come from the $80 million judgment.

Schroth also claims Franjola’s appeal violates Florida Bar Rules on conflicts of interest because Franjola provided legal services to the city in the same case that he now seeks to intervene personally.

The appellate court has ordered that the city of Ocala be included in Franjola’s appeal. However, Franjola said the city has no interest in how much money the class members must pay in legal fees, so he is not adversarial with the city and his appeal does not pose a professional conflict of interest between him and his former client.

The legal wrangling is also raising questions about the nature of communications between the city attorney’s office and Franjola.

Like Franjola, Batsel denies his office has communicated with Franjola on his individual claim. However, in an email to Marion County Circuit Judge Robert W. Hodges’ office dated June 9–following a hearing held on Franjola’s motion to intervene, in which he failed to show –Franjola states city attorney Robert Batsel, Jr. came to his office following the hearing.

At some point, there was communication between the two that has resulted in misunderstanding between Batsel and Franjola. The disagreement about what was said has now spilled into the appellate filings.

Franjola said Batsel told him “the city struck an agreement with class counsel (Schroth) not to oppose class counsel’s attorneys’ fee request in exchange for class counsel agreeing that unclaimed refunds would eventually revert to the city.”

Details of a May 10 hearing to finalize the judgment in the case and give class action members the opportunity to address the court before it’s ruling also reflect no such agreement.

Franjola attended that hearing as a class action member and objected to the amount of the attorney’s fees.

The city did not object to attorney’s fees sought by Schroth because they were not paying them; class members were paying them from proceeds received from the $80 million judgment.

At the hearing, Schroth argued against unclaimed refunds reverting back to the city. Instead, he advocated for the unclaimed money to be sent to the state’s unclaimed property program so that there would be more time to connect with those who were owed refunds.

Ultimately the judge sided with the city. Under the court’s final order, it’s likely that everyone the city can locate who is owed a refund will receive between 92% to 100% refund between the first and second disbursements, and that is factoring in paying Schroth’s attorneys fees.

As of July 20, Franjola maintained what he heard from Batsel. Franjola wrote in an email to Batsel, copying the Gazette, “I stand by my recollection of what you told me was discussed by you, Jason and Derek Schroth at counsel’s table before the start of the hearing on the motion to disburse. That discussion was followed by a bench conference with Judge Hodges.  If either of those discussions were transcribed by the court reporter, the transcript will reveal the contents of the discussions.”

Almost a month after that final hearing, Hodges entered an order denying Franjola’s Motion to Intervene, ruling that “intervention after Final Judgment on the merits is prohibited.”

Franjola responded to Hodges order denying his motion to intervene by filing the case’s fourth appeal.

How the fourth appeal impacts the public and attorneys

According to Batsel, Franjola’s appeal has not impacted the city’s efforts to disburse attorney’s fees or to start the claims process to get refunds out to residents and businesses.

Franjola’s appeal, however, has allowed the city to withhold from the Gazette eight years of city records related to the fire fee case that are exempt for public disclosure until the conclusion of litigation. The Gazette has continued to press for those records despite Franjola’s appeal.

The Gazette is interested in reviewing the records in part because of questionable actions by the city’s attorney’s office in a different but related case that came to light after the newspaper recently reviewed documents in that lawsuit.

The Gazette reported last week that in a 2011 suit between the city and Marion County school district over the fire fees city attorney Patrick Gilligan made a unilateral decision to sue the district without getting permission first from the Ocala City Council. That action allowed for confidential communications outside the public purview.

After more than eight years of litigation, three appeals, and an especially stern appellate order many questions remain about decisions made during the fire fee litigation.

Digital Extra: To get a glimpse of how the city’s argument was received by the 5th District Court of Appeals during the third appeal, use this link, starting at 16:25 when Patrick Gilligan addresses the panel.